Although I was back in Australia for a few weeks at the end of September-early October I still managed to enjoy some migrants moving through parts of the Gobi this autumn. In August and parts of September I was still based in the north-central Gobi in an area with lots of grass cover and a few low bushes (which I hoped would hold a few migrants). Whilst Asian Brown Flycatchers were common migrants throughout August these were largely replaced by Taiga Flycatchers which occurred daily in September. The main highlights in early September were the regular Siberian Rubythroats with a max. count of 10 in one day. Olive-backed Pipit, Siberian Stonechat, Dusky Warbler, and Dark-throated Thrush were the other almost daily migrants whilst there were only a few records of Pallas’s Grasshopper Warbler, Japanese Quail, Two-barred Greenish Warbler, Arctic Warbler, Eye-browed Thrush, White-crowned Penduline Tit, and Japanese Sparrowhawk and Oriental Honey-Buzzard. 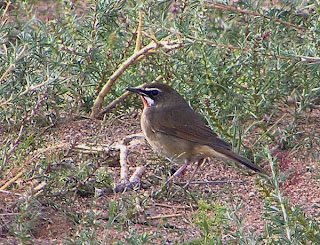 Siberian Rubythroat. Photo © D. Mantle
After returning from my break in Australia I had one day in Ulaanbaatar where I saw Dark-throated Thrush (ruficollis), Dusky Thrush (naumanni) and Hawfinch in the local park. I was then sent to a new project in south-east Gobi (about 4 hours south of Sainshand and only 80km from the Chinese border). This area was easily the lowest altitude I had worked at in Mongolia, only 900-1000m above sea level. Again fairly typical sandy, stony Gobi Desert environments but at last there were a few trees along dry river courses and some decent areas of Saxaul. I didn’t spend much time in the Saxaul woods (too far from my camp) but I searched a group of 30 well spread trees along the nearest dry creek as often as possible. Common residents included a healthy population of Saxaul Sparrow (up to 20 birds in one flock), Steppe Grey Shrike ['Saxaul Grey Shrike', Lanius (meridionalis) pallidirostris] (although these birds now appear to have left), and Siberian Accentors which had arrived in low numbers (wintering or passing through). 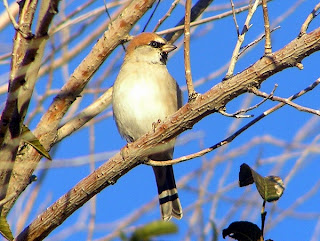 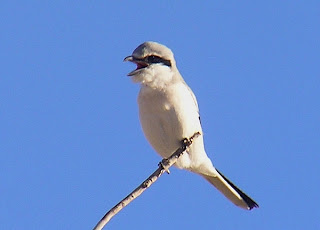 Steppe Grey Shrike. Photo © D. Mantle
Mongolian Ground Jay have also proved to be much commoner in this region with small groups observed most days. Small numbers of Meadow and Pine Bunting and a single Short-toed Eagle were observed in the middle of October whilst Red-flanked Bluetail were seen daily (with a max of 3 birds) up to the 20th Oct. 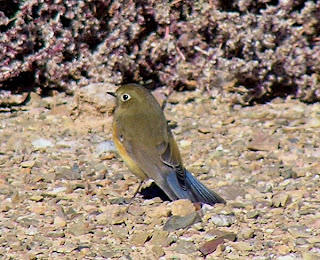 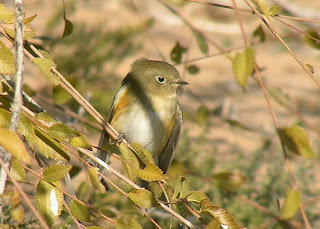 Red-flanked Bluetail. Photo © D. Mantle
A distinctly northern flavour to the migrants was obvious from this date on with Brambling, Siskin, Redpoll (flammea), Hen Harrier, Merlin being the main migrants recorded and singles of Rough-legged Buzzard, Northern Goshawk and a late Amur Falcon. Of course Rough-legged Buzzard could winter in the area. Another late migrant was a Barn Swallow on the 30th October.
Perhaps more exciting than the birds have been the mammals. All are quite wary but there seem to be healthy enough populations of several endangered large mammals. The Asian Wild Ass (Khulan) are particularly numerous. There must be thousands in the region as we have seen several groups containing at least 100 animals. Argali Sheep have also been seen a few times with a large male that we disturbed when driving over a ridge top being one of the real highlights of the year for me. Black-tailed Gazelles, Tolai Hare, and Fox are common on the more open plains but many of the smaller mammals have not been seen since the first snows a few weeks ago. 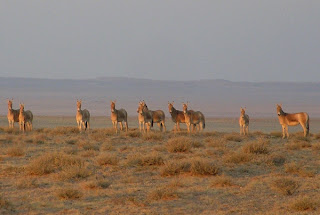 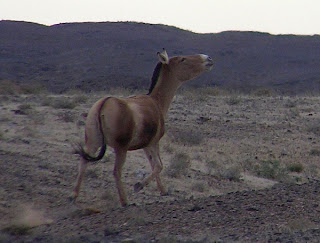 P.S. Can I use some photos for public awerness materials or posters?