A while ago I forwarded some information on Mongolian tagged Bar-headed Geese resightings to Birding Mongolia. Now Martin Gilbert from the Wildlife Conservation Society has sent more information and photos, including some fantastic shots from our Indian friends. Have a look, enjoy!

Thank you to everyone who has written with resightings of Bar-headed Geese marked with yellow neck collars. The responses over the last few weeks have been phenomenal, and it is wonderful to receive information on the travels of these birds to their wintering quarters in India! 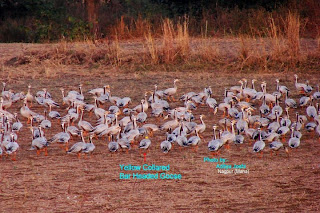 As many of you will now be aware these birds were marked in Mongolia during the summer 2007.

In total fifty Bar-headed Geese were fitted with yellow neck collars in mid July, in the Darkhad valley (N: 99.41078, E: 51.19736) in the northern Mongolian province of Hovsgol (lying south west of southern tip of Lake Baikal). 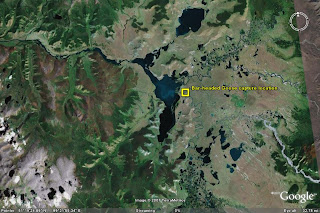 These birds were captured as part of a larger programme of surveillance for avian influenza led by the Wildlife Conservation Society, and partners from the Mongolian Central Veterinary Laboratory (for more information please see http://www.gains.org). 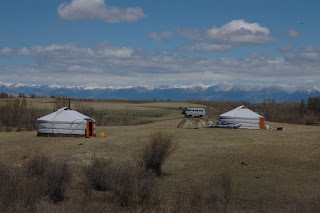 Although outbreaks of the highly pathogenic avian influenza H5N1 have occurred in northern Mongolia in the past, no outbreaks were reported in 2007, and these geese were captured as part of routine monitoring.

The Darkhad valley is a wide floodplain criss-crossed by rivers and dotted with a network of lakes and ponds. Bar-headed Geese arrive during early April, and pairs breed throughout the valley. By late June geese begin to congregate in flocks to moult, with most birds flightless through early and mid-July. Bar-headed Geese are one of the first species to leave northern Mongolia at the end of the summer. The geese begin to move on after moulting, with numbers declining during the first and second week of August. By the end of August almost all Bar-headed Geese had left the northern Mongolian lakes. 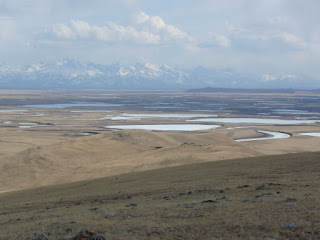 The geese were caught along rivers at night from a boat using spotlights and nets. The birds were secured in canvas jackets and brought to the shore where samples were collected and collars fitted. The birds were then released to rejoin the flocks. 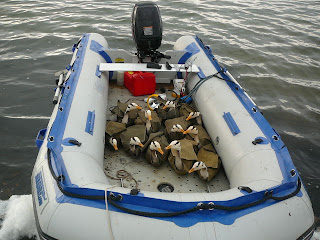 Over the last few weeks there have been several reports of neck-collared geese from Karnataka and Maharashtra in India. These have included one bird (with collar E6) near Mysore, Karnataka, another (with collar C6) close to Pune, Maharashtra and a third close to Nagpur, Maharashtra (where number could not be read clearly). 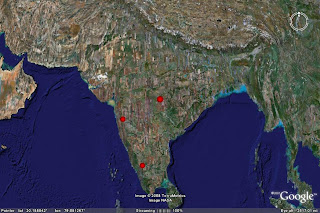 The information on the two birds of known identity is: 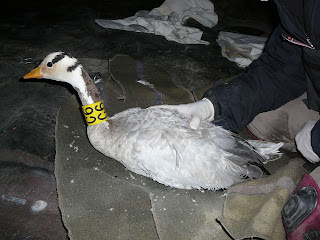 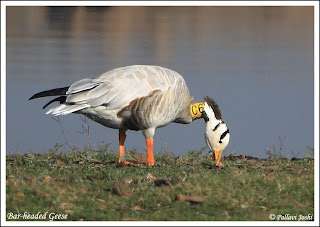 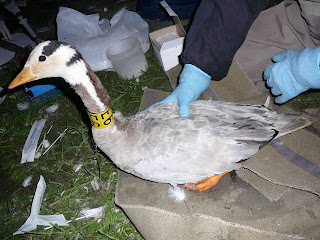 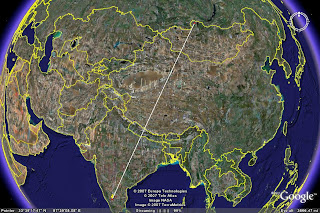 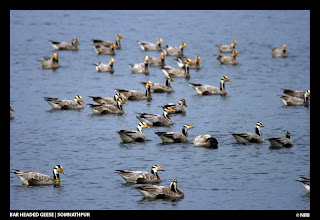 Once again thank you to all who have written with information, and please continue to share reports of further resightings.