The Great Bustard Otis tarda research team led by Mimi Kessler of Arizona State University is continuing its work in northern Mongolia. This spring, they investigated the cause of death of one of the bustards harnessed with a satellite transmitter last autumn (see post from August 2007). The transmitter was found at the site of its last transmission, at a migration stopover point. They were informed by local people that the bird had been hunted and eaten. Conversations with local people have revealed that hunting Great Bustards is relatively common in some areas of northern Mongolia. 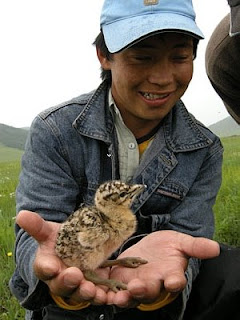 G. Natsag, undergraduate biology
student at the National University of
Mongolia, holds a Great Bustard
chick. Clutches were monitored over
the summer to track mortality rates.
Photo © A. Kessler

This year, four new bustards have been harnessed to date. The team has been observing the movements of one male, “Bayan”, in particular, who has spent the summer touring the region’s Great Bustard breeding grounds. The team has investigated these sites and the new leks identified will be proposed as Important Bird Areas.