From 8 to 28 August 2013, my wife Hilde and I made a wonderful birding trip across south and central Mongolia, thereby visiting continental sand dunes in the Gobi region, montane lakes in the Altai, endless steppes with saline lakes, and the southernmost fringes of the taiga belt. The trip was designed by Axel Bräunlich whom I met through a common friend at BirdLife International. Axel’s itinerary was outstanding in every respect: bird-wise, landscape-wise, travel-wise and even weather-wise. Local logistics were meticulously taken care of by Abu and his wife who found us an excellent driver and cook and provided us with lots of advice.

After our early morning arrival in Ulaanbaatar we were picked up by Abu and Amraa, a very active local birder, for an afternoon trip to the UB ponds near the airport. Here we saw our first four lifers of the trip, namely Swan Goose, Demoiselle Crane, White-crowned Penduline Tit and Long-tailed Rosefinch. Amraa also found a recently-fledged Yellow-breasted Bunting that quickly attracted its beautiful parents. 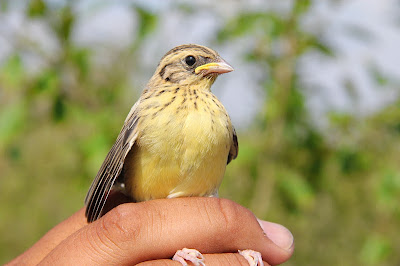 Next day we enjoyed a large group of Azure Tits along the Tuul river and made a quick sightseeing visit to the city centre. 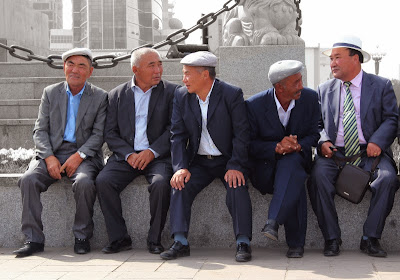 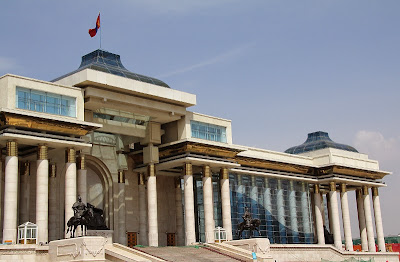 Then we boarded a domestic flight to the Gobi town of Dalanzadgad where we were welcomed by our very friendly and helpful cook and driver. Next morning we birded a small plantation that produced an unexpected Daurian Starling and then drove to Dalanzadgad to buy (lots of) food and drinks! After enjoying seven Arctic Warblers in the central street park, we started our birding journey that would take us west to Yolyn Am, Khongorin Els and Boon Tsagaan Nuur, north to Khukh Nuur and Ogii Nuur, east to Hustai Nuruu NP and Tereldsh, and finally back west to Ulaanbaatar.

Thanks to the up-to-date site information from Axel and Abu of Birding Mongolia we managed to see all our target species (and so many more) and the landscape was really delightful. In Yolyn Am we found both a pair of Mongolian and Brown Accentors feeding a cuckoo nestling, and the little stream produced a very fine selection of birds that came to drink, best of which were Chinese Beautiful Rosefinch and Grey-necked Bunting. 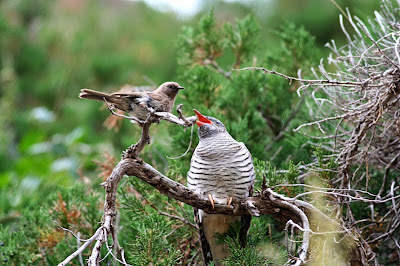 Mongolian Accentor feeding a cuckoo fledgling,
sitting on a Savin Juniper Juniperus sabina at Yolyn Am. 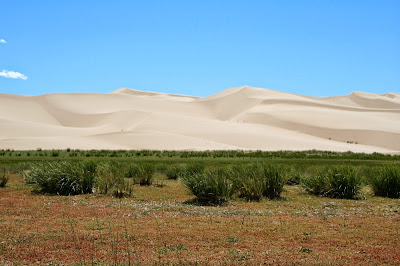 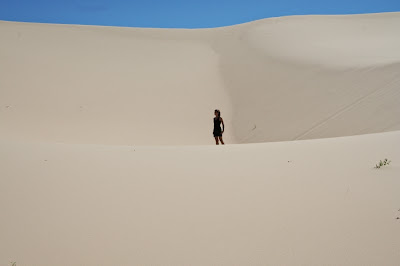 A walk through the sand dunes of Khongorin Els.

However, we were mainly concentrating on the Saxaul forest remnants that soon produced beautiful delicate Saxaul Sparrows, Asian Desert Warblers and the Saxaul (Steppe Grey) Shrike. 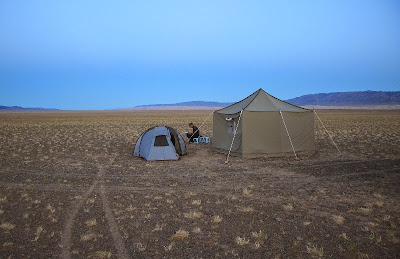 Wrapping up the bird report at the camp of Khongorin Els.

From there we made the long—but never boring—trip to Boon Tsagaan Nuur, a large saline lake that is famous for its Pallas’s Fish Eagles and Relict Gulls. 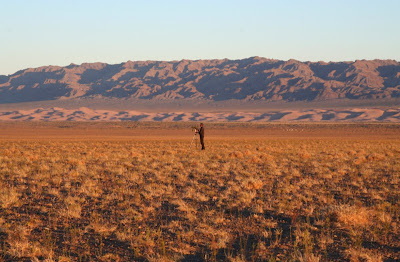 The first species already greeted us when setting up the tents, the second one played it a bit harder but four Relict Gulls eventually showed well during the second day. 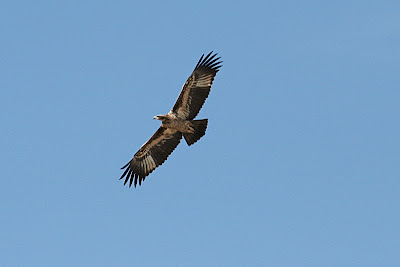 An adult Brown-headed Gull moulting into winter plumage was an unexpected bonus, but most spectacular where the thousands of Eurasian Spoonbills and the very fine selection of waders, including Little Curlews, Long-toed Stints and Sharp-tailed Sandpipers.

Next we made the long journey to the high altitude lake of Khukh Nuur, enjoying marvellous landscapes… 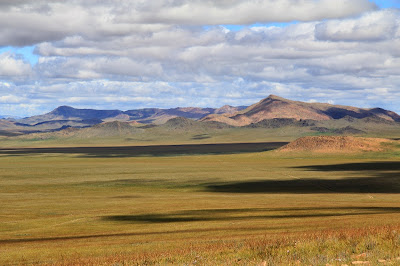 Our cook in full action

Pit stop along the way to Khukh Nuur:
meet and greet with a nice Mongolian couple

… and good numbers of raptors close to the track. 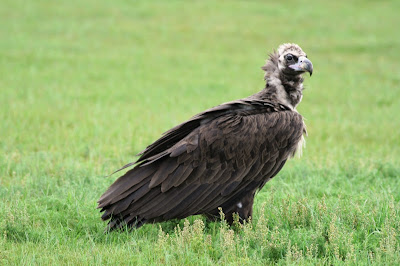 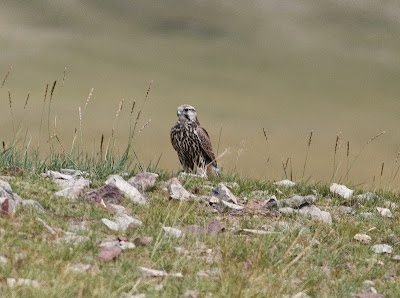 Less than ten minutes after pitching our tents near a Mongolian Gull colony, thirteen distant Altai Snowcocks showed very nicely in the telescope and were still present there during the next morning. However, the real price bird of this area is the elusive White-throated (Hodgson’s) Bushchat, and after two days of searching we found both a male and a female—beautiful comparison with the very numerous stejnegeri Eastern Stonechats! Other lifers were Rufous-backed (Evermann’s) and White-winged (Güldenstädt’s) Redstarts and the peculiar sushkini subspecies of Asian Rosy Finch.

After enjoying the legendary Mongolian hospitality we set out for our next destination, which was the beautiful lake of Ogii Nuur. 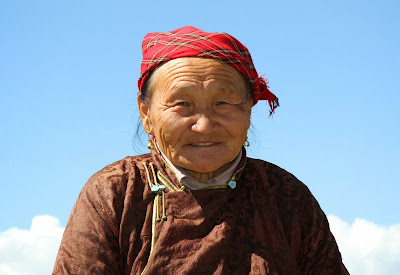 On the way we were treated to our first heavy rain, so we took advantage to make a quick visit to the beautiful Erdene Zuu Monastery. 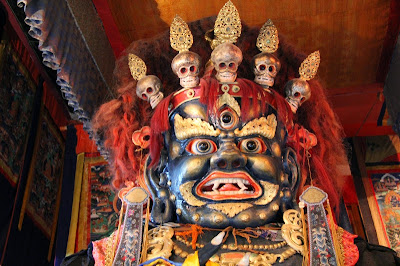 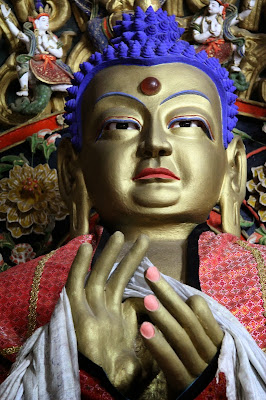 Yet luck was again on our side as the sky suddenly cleared just when we were planning to pitch our tents. An evening stroll produced an unexpected Jack Snipe—quite regular in Belgium but very rare in Mongolia—and the next morning a pair of Stejneger’s Scooters were floating on the water. The mudflats around the lake produced many new species of waders but the best record came from two Hooded Cranes flying in a migrating flock of Demoiselle Cranes.

We then headed to Bayan Nuur, a large lake edged by grass, reed-beds and mudflats. Upon arrival, a very fine White-naped Crane family was quietly foraging near the road, and a little further one adult and two juvenile Common Cranes where resting in a group of Demoiselle Cranes—three species of cranes at a glance … this must be Mongolia! The large reed bed held good numbers of Paddyfield Warblers, Oriental Reed Warblers, Pallas’s Grasshopper Warblers and Bearded Tits, while an evening walk produced both Brown-cheeked Rail and Baillon’s Crake and four Pallas’s Reed Buntings. With so many good birds around we could even lure a local shepherd into some preliminary birding … 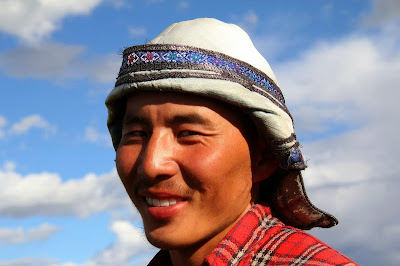 Despite several courageous attempts the next morning, millions of mosquitoes prevented us from exploring the proper lake shores—not only were we covered by hundreds of them, they also crept in our ears, eyes and mouth—so we were highly relieved to find two Asian Dowitchers feeding among numerous other waders at a mosquito-free roadside pool opposite the lake. Class birds!!

We then went to Hustai Nuruu National Park where we quickly found a group of Przewalski’s Horses feeding high up at a mountain slope. 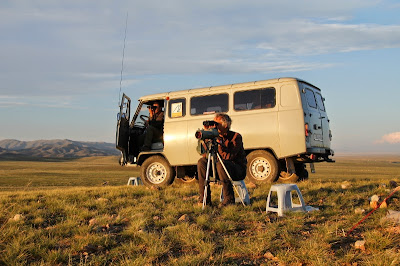 Closer to the ground were six hunting Amur Falcons, many Meadow Buntings and a dazzling total of 52 Daurian Partridges of all ages, some only taking off one metre from our feet. Next morning we exploited a small dry valley where we found a nice selection of migrants, including Dusky Warblers, Taiga Flycatchers and an unexpected Sulphur-bellied Warbler. 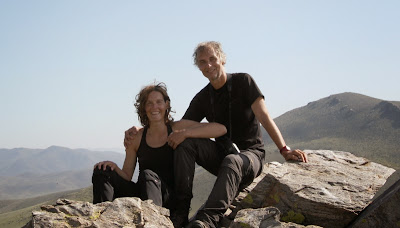 During our last morning we woke up by howling wolves not so far from the tent, and meticulous spotting with the scope revealed a distant pack of five animals warming themselves in the first sunlight—another of so many highlights of the trip.

Finally we reached the southernmost boundary of the taiga belt at Tereldsh, where we met Abu who kindly joined us for a final two days of mega forest birding. We undertook a lot of climbing and searching to find a Black-billed Capercaillie. 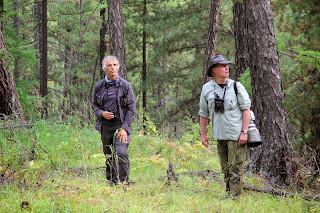 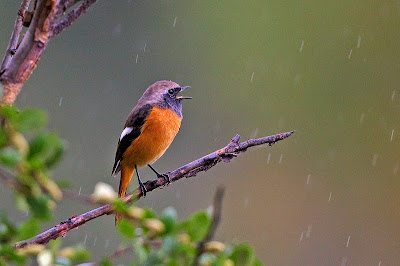 We finally flushed a female less than 150 m from our camp. Leaf-warblers were a lot easier and came in mixed flocks of five species, and Red-throated Thrushes, Pine Buntings, Lanceolated Warblers and Azure-winged Magpies (a huge flock of 33 individuals) all added to the magic of this place. 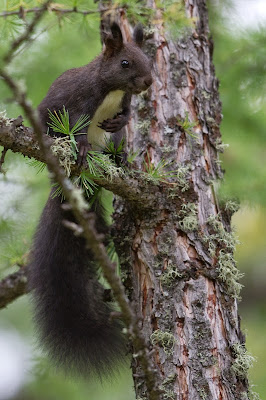 Just one lifer was still missing—Daurian Jackdaw—and it was an almost apocalyptic end of the trip when Abu found us a group of 2,500 birds of mixed ages next to the tarmac road just before entering Ulaanbaatar in pouring rain, about the only rain we had during the whole journey. 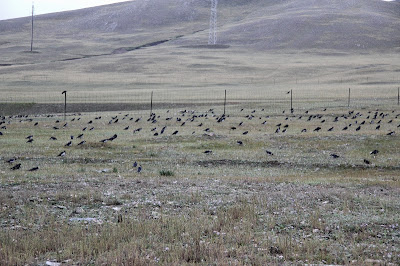 What a trip indeed …