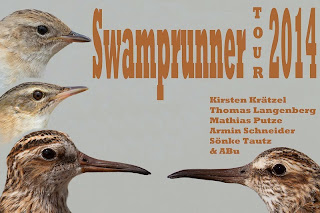 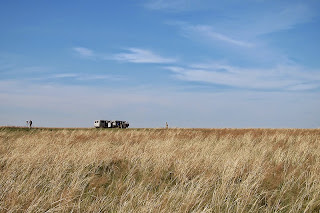 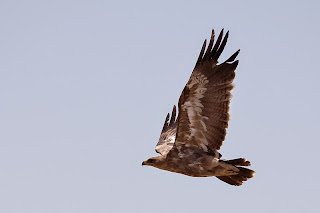 To reach Buir Nuur, one has to cross a very flat and uninhabited area called Menengijn-Tal (MT) where everybody has to register at the border police post before entering the plain. MT has no natural water supply (apart from rain) and therefore no people live here and hence there is no livestock at all. It is, more or less, in a quite pristine state, allowing wild animals to live as they did before mankind had driven them out of the best habitats. MT is famed for its huge herds of Mongolian Gazelle but on our bone-shaking haul on 29 May we saw only ONE! This is close to the result from three years ago (Eastern Specialties Tour, part two) and it appears that the gazelles are elsewhere at this time of the year. MT stretches across more than 60 km from west to east and the low grazing pressure enables grass to grow taller than in the rest of Mongolia where it is grazed down to almost zero by the all-too-high number of sheep, cows, horses, camels and a much increased number of goats. The sandy road winded through an ocean of Stipa-grass which gave the area a silvery shimmer. In 2011 the grass was low (but still higher than elsewhere in the country!) and the ladies had to walk quite a distance if they needed some shelter. Now this was no problem anymore. Driving was slow because the former (in 2011) flat “highway” track had turned into a very bumpy chain of deep holes. Many of these holes were filled with water. These attracted hundreds of birds and the dominating species was, of course, a lark: Greater Short-toed Lark. This species breeds here as do other ground-dwelling species like Richard’s Pipit, Asian Short-toed Lark, Mongolian (Brandt’s) Horned Lark and Mongolian Lark but we logged also some migrant species: huge numbers of Sooty Flycatcher perched on the grass stems and both, Brown and Isabelline Shrikes did likewise, although in much lower numbers. In the middle of now-where, a Common Moorhen walked slowly out of the water when we approached. This was a much unexpected species in these grasslands. Further we flushed a Steppe Eagle, a single Short-eared Owl as well as Pallas’s Sandgrouses and we wondered whether both latter species actually could be breeding here. 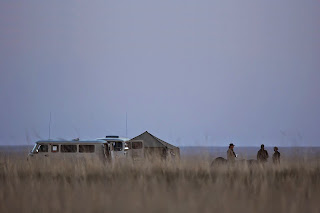 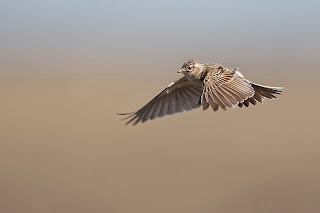 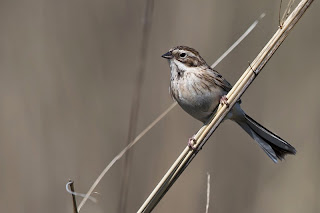 In the evening we arrived at the western end of the lake and were greeted by our first Oriental Plover, a stunning male. Finding a campsite proved to be difficult but in the end we found a flatter spot within the “toilet”-grass-tussocks (Achnatherum splendens). Thanks to the much higher water level the lagoons around our camp were full of foraging waders: Most of them were Red-necked Stints with c.1700, but more than 200 Pacific Golden Plovers, more than 40 Broad-billed Sandpipers (see here, part 2), about 20 Sanderlings, lots of Pied Avocets, Black-winged Stilts, Kentish Plovers, Temmick’s Stints, 4 Terek Sandpipers, 3 Mongolian (Lesser) Sand Plovers and a single Asian Dowitcher were most welcome. The same applies to our dinner and a couple of wader-beers.

In the early morning of 30 May, we set up our walk-in traps and everybody went birdwatching. Not much walked in though (2 Red-necked Stints and 2 Broad-billed Sandpipers). Surely, there were too many alternatives for the waders. The Asian Dowitcher could not be relocated, but c.25 Grey-tailed Tattlers, which roosted in one of the lagoons in a tight flock, caused some stir among us. With Pale-legged Leaf-warbler, Taiga Flycatcher and Siberian Blue Robin plus other species of leaf-warblers we bagged a nice set of migrants but the number of migrants wasn’t as high as in MT. Scanning through the flocks of Yellow Wagtails produced a few tschutschensis (or look-alikes, possibly female macronyx?) but the majority belonged to macronyx anyway. Other species encountered were 1 Purple Heron, several flocks of 2cy Eurasian Spoonbills, hundreds of White-winged Terns, some Common Sandpipers and a single Ruddy Turnstone. The local Père David’s Snowfinches were busily feeding their young on more elevated and thus drier ground. 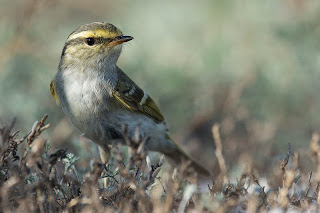 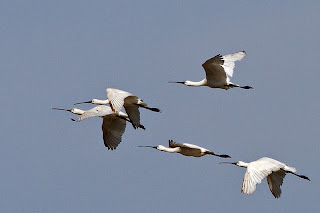 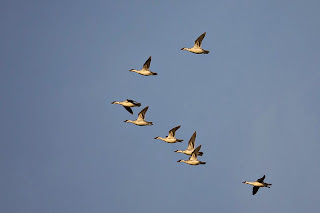 Most migrant ducks had left already and finding birds on the lake was a time-consuming task. With many hours spent searching we managed to see the following: 50 Asian White-winged Scoters, 8 plus 10 migrating Smews and a Red-crested Pochard.

After two nights, on 1 June, we moved to the delta of the Khalkhgol River in the north-east of the lake. On this short trip we had 4 male Oriental Plovers of which one was tolerating our presence. After we had selected our campsite we explored the area. It was amazing to see how many Great Cormorants commuted between their colony in the willows and the lake. There must be plenty of fish to feed them. Eastern Marsh Harrier, Great White Egret and Purple Heron were a common sight and we heard many Oriental Reed Warblers singing from the flooded forest. Other birds worth mentioning were Little Terns (courtship feeding), Amur Falcons and, best of all, a breeding pair of Chinese Grey Shrike. There also were at least 20 pairs of Northern Lapwing breeding here but the other lapwing, Grey-headed Lapwing, didn’t show up, yet. Also noteworthy are 36 Eurasian Spoonbills, 1 Whiskered Tern and 2 drakes Falcated Duck. Birdwatching was a bit hampered by the trillions of flies, luckily not of the biting variety. 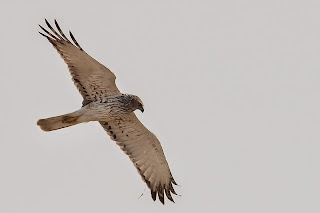 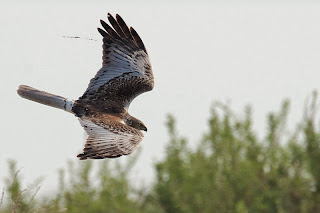 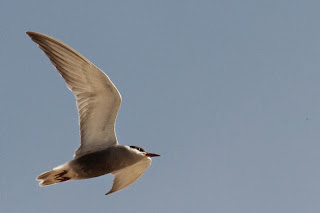 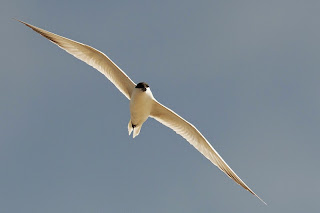 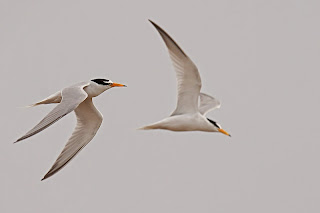 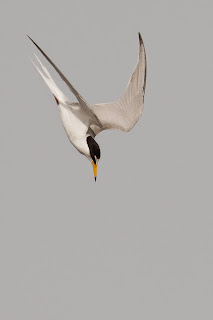 During our few day at the lake, temperatures easily reached the mid and high thirties (in numbers: 34°C /93°F on 30 May, 37°C/98.6°F on 31 May and cooling down to a still hot 33°C/91.4°F on 1 June) which is more than 20 degrees higher than three years ago! This sucked a lot of energy and we found that the birds suffered in the same way from the heat than we did: During one of our “siestas”, we had a Pallas’s Leaf-warbler seeking for shade under one of our cars. The warm-hearted of us provided some drinking water for the poor bird which was taken immediately and hopefully helped the small creature to survive the incredible heat wave. By the way: the photographers did an incredible job in the heat because only the 2 or 3 hours after sunrise were without any heat haze. Well done guys! 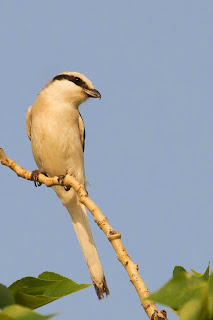 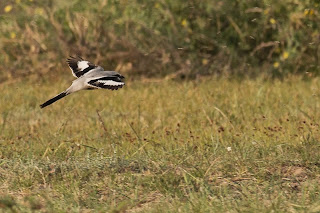 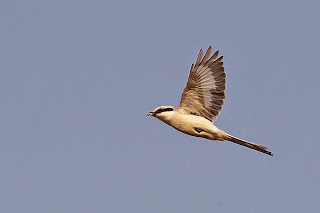 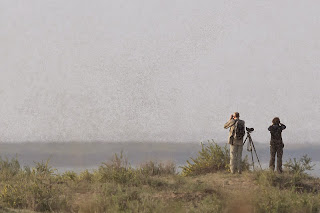 With so many flies in the air…
…you’ll never bird alone!
Buir Nuur, Jun 2014 © Mathias Putze

There is, of course, more to report and the next blog post will be about the waders we saw, so keep checking this site!