Populations of Yellow-breasted Bunting Emberiza aureola are rapidly declining across their range and have recently been classified as endangered by IUCN. They were common in the northern Palearctic from Finland and Belarus, eastwards to northeast Asia. Mainly due to excessive hunting in China and several other reasons, the species which once was a common bird has declined across its range and become quite rare. However, ecological aspects of the decline remain unclear. 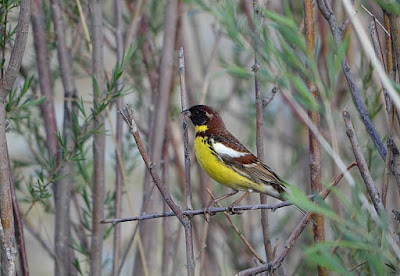 It is vital to understand breeding ecology and migratory behaviour of this species to help identifying conservation actions in the future. During the breeding season (June) in 2016, we want to find and identify locations suitable for deploying geo-locators next year and establishing a long-term population study and monitoring for this species.

We are looking for volunteers who can help us to find breeding localities of Yellow-breasted Bunting in north-eastern Mongolia. However, due to lack of funding and urgency of the issue, Mongolian biologists cannot do this on their own. We need volunteers who are able and willing to pay for costs related to their travel and their participation in field surveys in Mongolia in the first half of June 2016. We can help arrange the logistical support you will need while you are in Mongolia. The field survey will last 2-3 weeks in June, as we would appreciate volunteers willing to contribute their time and resources during this period.

Mr. Batmunkh Davaasuren
at the Wildlife Science and Conservation Center of Mongolia
batmunkh@wscc.org.mn