First spring observation dates in Khovd 2006 / 2007,
and some thoughts about climate change and spring arrivals
by Axel Braunlich

Igor Fefelov from Irkutsk, Russia has left a question at the comment section of my blog:

Amar sain Axel,
What are the data on bird arrival this spring? We have had some extremely early records, i.e. Porzana pusilla on 20 April (!! - common arrival falls on middle May, not earlier) and Phylloscopus inornatus on 9 May (common date is later than 15 May in the last decades of years).

Dear Igor,
I have limited experience since I spent only two spring seasons (2006 & 2007) here in Khovd. However, here is a selection of my first observations for some species.

So there is no obvious pattern of very early arrivals in Khovd this spring. But note, my observations here are not part of a scientific study. I rather try to go birding as often as possible in my spare time. My first observations are no necessarily “arrival dates”, quite a few factors must be considered when looking at my data:


So, some of my first observation dates may not be particularly meaningful – but they may be of value to anyone who wants to compare with elsewhere in north-easten Asia.

Publishing lists of first observations/first arrivals in defined areas can be very helpful understanding the effects of climate change on bird migration. Such lists are for example published for Iceland for 1998-2007 on The Icelandic Bird Pages, and for Christchurch Harbour by the Christchurch Harbour Ornithological Group (south coast of England)

The past winter was rather “mild” (for local standards) here, and spring arrived earlier. Khovd experienced a rather dramatic temperature increase recently: In general the mean annual air temperature has risen by around 3.5° C between 1983 and 2005 according to Meteorological Survey Station Khovd.

April 2007 was the third warmest April for the globe on record, and the first four months of 2007 were the warmest ever, according to statistics released by the National Climatic Data Center. The global average temperature for April was 1.19°F/0.66°C above the 20th century mean. Over land, April global temperatures were the warmest ever measured. Ocean temperatures were a bit cooler (seventh warmest on record), thanks to the cooling associated with the disappearance of the winter El Niño event. Source: Dr. Jeff Masters' WunderBlog.

Temperature departure from average for April 2007.

The map above shows that especially Mongolia, Central Siberia to the Russian Far East, and the area to the south-west of Mongolia (where many spring migrants to Mongolia and Central Siberia presumably originate) had above the average temperatures in April 2007. This might explain the very early arrivals of some bird species in the Irkutsk region.

There have been a lot of debates about climate change and birds (and about climate change and global warming in general of course! See links at the end of this post). There are overwhelming proofs that humans, through increased emissions of atmospheric greenhouse gases and aerosols, are causing climate change, which in turn is linked to changes seen in the springtime activity of numerous animals and plants.

I have selected two abstracts of scientific publications dealing with spring arrival dates of birds, one from Manitoba, Canada, and one from south-western Germany to give examples of how much global warming already changed the behaviour of migratory birds.

Murphy-Klassen, H. M, Underwood, T. J., Sealy, S. G. & Czyrnyj, A. A.2 005. Long-term trends in spring arrival dates of migrant birds at Delta Marsh, Manitoba, in relation to climate change. The Auk 122: 1130-1148.
We examined a 63-year data set of dates of first spring sightings for 96 species of migrant birds at Delta Marsh, Manitoba, and considered the influence of local climate change on those arrival dates. Mean monthly spring temperatures increased (0.6-3.8°C) for all four months considered; however, trends for February and March were stronger than those for April and May. Over the 63-year period, 27 species significantly altered their arrival dates. Most of those species arrived significantly earlier; whereas only two species, Greater Yellowlegs (Tringa melanoleuca) and Lesser Yellowlegs (T. flavipes), arrived significantly later over time. About half of the migrants showed significant relationships between arrival dates and mean temperature for their month of arrival. Fifteen species showed significantly earlier arrivals over time and a significant relationship between arrival date and temperature. We also characterized migrants by taxon, breeding status, and wintering location to determine whether there were any trends for altered arrivals within certain groups. Waterfowl, species that breed at Delta Marsh, and short-distance migrants showed slightly higher incidences of advancing arrival dates compared with other groups. Our results provide evidence that climate warming has influenced spring migration arrival dates of several species in Manitoba. source.

Peintinger, M. & S. Schuster 2005: Changes in first arrival dates of common migratory bird species in southwestern Germany. Vogelwarte 43: 161-169.
Global change affects the timing of bird migration. It presumed (and has been shown) that, (1) species arrived earlier in spring and that (2) this response to climate change is stronger in short-distance than in long-distance migratory species. To confirm this pattern we analysed long-term observational data from field ornithologists under the condition that (1) at least eight arrival dates for the periods 1970-1986 and 1987-2003 were available, (2) observers had not changed their study area during these years, and (3) at least three time series were available for a species. In total, we examined the first arrival dates of 17 migratory species at 13 sites in south-western Germany. To analyse changes in arrival times we used two statistical procedures: linear regression for the period 1970-2003 and Mann-Whitney U-test to compare median arrival dates of the periods 1970-1986 and 1987-2003. Out of 103 time series 96 showed a trend towards earlier spring arrival, whereas series only for seven time series the reverse was true. Using linear regression for 58 species time series we found a significantly earlier arrival date. On average, arrival date changed 0.3 (max. 2.9) days per year. Only one species showed a significant later arrival date. The U-test revealed similar results. An analyses of variance (ANOVA) showed that this effect was stronger in short-distance than in long-distance migrants. We suggest that earlier spring arrival could be due to a shift of wintering areas towards the North – even in some long-distance migratory species.

A blog on Birds and Climate Change. 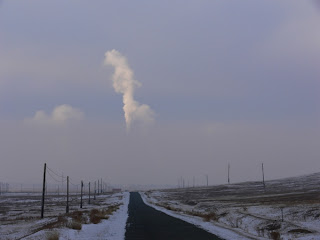