Rare vulture shot dead in Myanmar after being freed in Thailand

I posted information on the rehabilitation and release of a Cinereous Vulture in Thailand to Birding Mongolia a while ago. Here’s the rather sad end of the story.
Axel 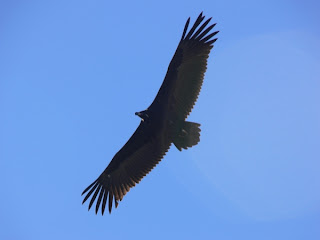 FYI regarding the tragedy of Anakin the Vulture. It is officially to call it an end. However, we will continue doing our work to help other wild raptors by rehabilitation and release.

Fly the vulture home project has been changed to Wild Bird Rehabilitation & Release Fund (by Bird Conservation Society of Thailand, BCST) to fully support the work of Kasetsart University Raptor Rehabilitation Center that was founded in memory of Anakin and continue to such kind of work to educate and ignite public awareness about raptors and hopefully we will have less and less people who aim their guns toward birds in the sky!

Rare vulture shot dead in Myanmar after being freed in Thailand
The Associated Press
Thursday, November 22, 2007

A rare vulture set free in northern Thailand is believed to have been shot dead by a villager in Myanmar, bringing an end to a haphazard campaign to return the bird to its homeland in Mongolia, a conservationist said Thursday.

Chaiyan Kasorndorkbua, a veterinarian who oversaw the release of the cinereous vulture, said his team lost contact with it in May, only three weeks after it was freed in northern Thailand. He said he then received an e-mail in July from a rebel soldier in Myanmar's Shan State who said a villager had killed the bird. The soldier then followed up in September with photos of the vulture's radio transmitter and leg band that convinced Chaiyan that the bird was dead.

"The soldier told me that the villager had never seen such a bird so became curious and shot it," Chaiyan said. "It is common practice in Southeast Asia when people have a gun to shoot and look later. This is a tragedy." 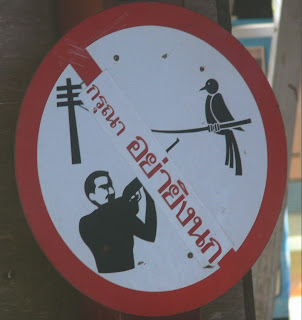 Sign at a railway station in Thailand
Photo © A. Braunlich
The odds of survival were never good for the ash-gray-colored vulture — named Anakin after a character in the "Star Wars" movies — after it was found in southeastern Thailand last December, emaciated and apparently lost.

Veterinarians in Bangkok nursed the bird back to health, feeding it pork legs and rotten meat. Chaiyan then teamed up with Thai Airways and announced plans in March to fly the bird to Mongolia.

But fearing bird flu, China and South Korea refused to let the bird be transported through their capitals, despite tests showing it was free of the deadly virus. The vulture was later freed in northern Thailand near the border with Myanmar, also called Burma, thousands of kilometers (miles) from its home.

"It's confirmed our belief from the beginning that it was risky to release the vulture on the Thai-Burma border," said Gawin Chutima, chairman of the Bird Conservation Society of Thailand. "It's a pity. We lost a very good and rare opportunity to study the migration of one of the largest birds in Asia."

But Gawin and Chaiyan said the effort to return the vulture had raised awareness about the species' plight. Also known as the black or monk vulture, it is in decline in Asia because of habitat loss, shortage of food and shootings by villagers who believe the bird brings them bad luck.

"There remains a bad perception about vultures. We have to change that," Chaiyan said. "We may have lost this vulture. But with rehabilitation programs like this, we can raise public interest and awareness about vulture conservation

The cinereous vulture - normally not found in Thailand - is defined as near-threatened by the World Conservation Union. Though its numbers are declining in Asia, conservation efforts have boosted the population in Greece, Spain and other parts of Europe. Its global population is estimated at between 14,400 and 20,000. 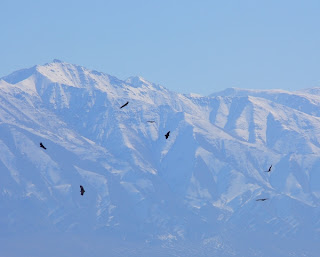