Roadside Birding in February
text and photos © Andreas Buchheim
Social matters brought me to the small village of Buutsagaan some 160 km west of Bayankhongor where I stayed in a ger (yurt) for 4 nights (from 5–9 February). There was not much time left for proper birding thus I had to concentrate on roadside birding. It takes about 20 hours from Ulaanbaatar to Buutsagaan by car. On the way down there I did not see many birds, just 3 Asian Black Vultures on the 200 km between Arvaikheer and Bayankhongor, and few small flocks of larks (mainly Horned Lark, but also Mongolian Lark and Asian Short-toed Lark) plus 4 Upland Buzzards. In Arvaikheer alone I saw 9 Asian Black Vultures indicating a better feeding area than the steppe itself. Best was a flock of 50 to 60 Snow Buntings which we almost hit with the car about 10 km west of Arvaikheer. During the night drive from Bayankhongor to Buutsagaan only mammals were seen: Corsac Fox, Tolai Hare and Manul (Pallas’s Cat). Mayor events during this lag were car-related: we had to pull two cars out of the snow, we had to help people to pull their car back onto the wheels (don’t drink and drive!) and to change a tire because of a puncture. 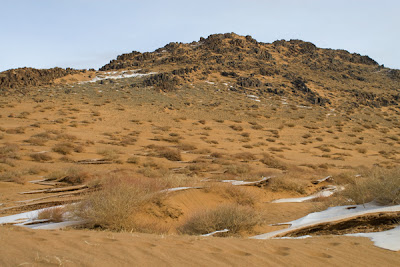 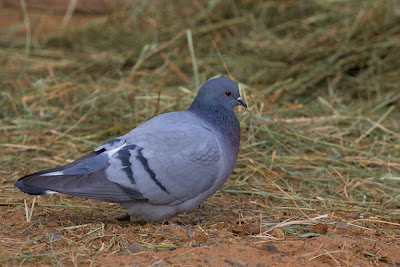 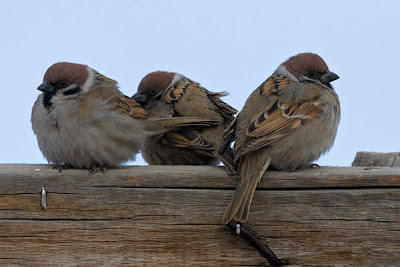 Eurasian Tree Sparrows, Buutsagaan, Feb 2011.
From the ger I saw the usual village birds like Eurasian Tree Sparrow, Common Raven and Hill Pigeon. As there were 11 Asian Black Vultures and a pair of Bearded Vultures searching for food over the hills south of the village I decided to go there the next day. Conditions for photographing were very good that day: blue sky and a strong wind from the north so I hoped to get good shots of head-on soaring birds in brilliant light. But as so often the weather had changed until the next day and the even stronger wind now came from the south so I got the birds only from behind. Anyway there were only 5 birds around (a single Asian Black Vulture, a group of 3 Common Raven and a Bearded Vulture) which I saw only very briefly and I could only take some strange shots of the latter, though. Grrrrr! 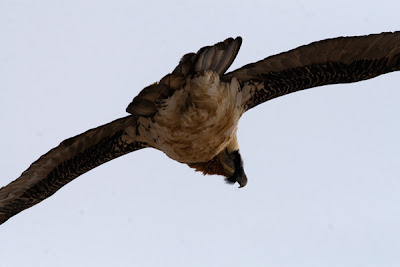 Bearded Vulture “gotta pick a bone with yor”, Buutsagaan, Feb 2011
On my way back to the village across the plains I found a flock of about 100 Horned Lark of the local form brandti and among them at least one “Northern” Horned Lark flava plus a single Lapland Bunting. 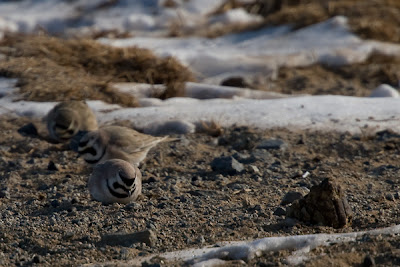 Brandt’s Horned Larks busily foraging but quite wary,
Buutsagaan, Feb 2011.
Soon it was time to head back to the capital. The best bird of the trip was seen soon after sunrise: a (non-adult male type) Snowy Owl had taken residency on a ridge overlooking a broad valley about 4 km west of the village of Bumbugur. This was the good side; the bad side was that I was not driving the car and we had stopped (pee break) shortly before I saw it thus I could not claim some prostate-problems to stop again and so I saw the bird just from the driving vehicle (luckily the windows had not yet been frost-covered). Other birds seen were some flocks of Lapland Bunting (during another stop), the new potential armchair tick “Northern Little Owl” (the proposed English name does not seem to fit as related taxa occur further to the north in European Russia) and a single Asian Black Vulture. We arrived back in the middle of the night. A quite tiring trip but definitely worth for the Snowy Owl.

Nyctea scandiaca. That is a great bird. It sounds like if we travel to the wild we possible to see many good birds such as Plectrophenax nivalis, Calcarius lapponicus. Winter is still good for bird watchin in Mongolia, especially in the forest..Thank's

by the way, what is your camera model and lens?