After my half-day trip to the UB ponds I met John McLoughlin, leader of a Bird Holidays tour, in the Grand Khaan Irish Pub in Ulaanbaatar. John has been running autumn birding trips to Mongolia for several years now, and I can highly recommend these. He kindly offered me a lift to Gun Galuut, and I ended up joining him and his small group for the next few days, visiting the marshes in the valley of the Kherlen River not far east of UB, and also Jalman Meadows in the Khentii Mts.

We left UB the next morning (on 4 September), heading east on the asphalted main road. After a rather uneventful drive (c. 3 hrs including a stop near the main road where we saw 9 Eurasian Black Vultures) we eventually reached Gun Galuut, some 130 km from UB. This interesting little (c.20,000 ha) steppe–wetland nature reserve near the Kherlen has become an important birdwatching destination during the last few years. It has been featured here on Birding Mongolia several times: A wonderful day at Gun Galuut by Abu, 27 August 2011; 23 May 2009 by Abu; and May 2007 by Dan Mantle. See also additional data from 2010 given at the end of this post. 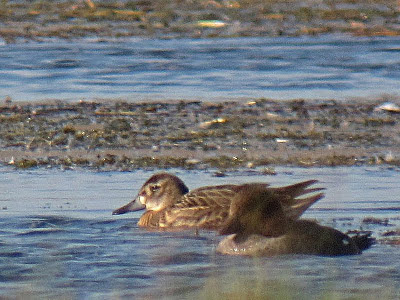 The weather on the 4th was fine and dry, with a gentle breeze only. After occupying our gers (yurts) at the Steppe Nomads Ger Camp we visited the Tsengiin Burd wetland, immediately to the south. Highlights in this area of grazing marshes with many small ponds were a juvenile Baikal Teal, a flock of 7 adult White-naped Cranes, and a well-showing Eurasian Bittern. We spotted also several Siberian Marmots and two Corsac Foxes. Later on we visited the “larger” lakes (they are not really “large”: Lake Ikh Gun covers c. 60 hectares only), but we covered this area much better the next day. A Tolai Hare was at the ger camp. 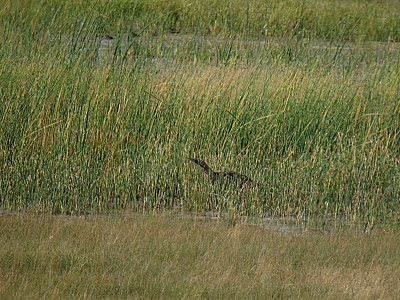 5 September 2011 was another nice day, with a maximum temperature of 18°C (64°F). An early morning walk through the camp near the river with its few planted bushes produced 1 Yellow-browed and 11 Dusky Warblers, 1 Taiga Flycatcher, 1 Brown Shrike and a Black-faced Bunting. After breakfast we visited the lakes, where we found as absolute highlight for the trip two Siberian Cranes near Lake Ayaga. We identified them as adult. However, see Abu’s recent post (with good photos of the cranes!) were he explains why these very birds (seen already on 22 August) are not fully adult.

A nice bonus was a large (diameter including legs c. 7 cm) spider on the steppe between the lakes: 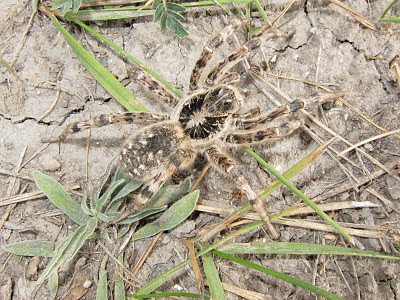 Over 400 Demoiselle Cranes were on the move in the area, and in addition we found both Bar-headed and Swan Geese and a host of waders and wildfowl. These included 5 Little Curlews, Stejneger’s Scoter and a Eastern Spot-billed Duck amongst the large number of wildfowl present. 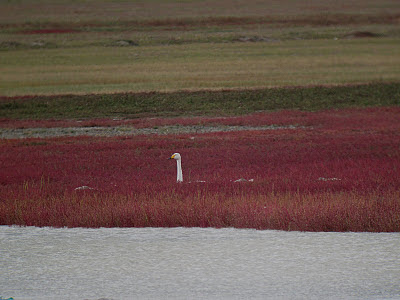 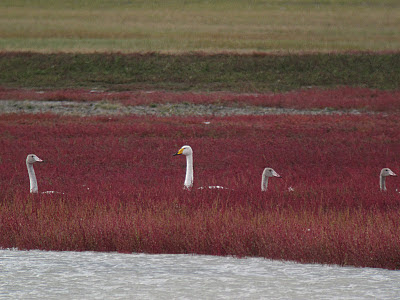 In the late afternoon a thunderstorm moved in, with rain, and freshening-up winds (Beaufort 5–6, max. 11 m/s).

The lakes held a similar array of birds but there was no sign of the previous days Siberian Cranes. A new bird was a Northern Hobby. So we headed on to our next and final camp at Jalman Meadows. On the way (still very close to Gun Galuut) one can see the large coal mines of Baga Nuur, which provide fuel for Ulaanbaatar’s power plants (see previous post on air pollution in UB). 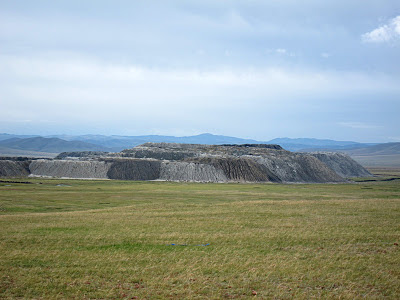 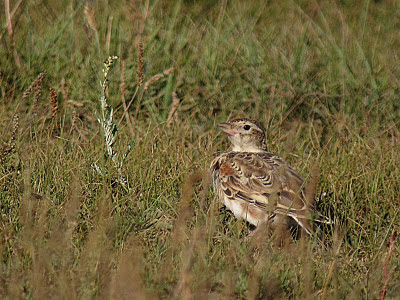 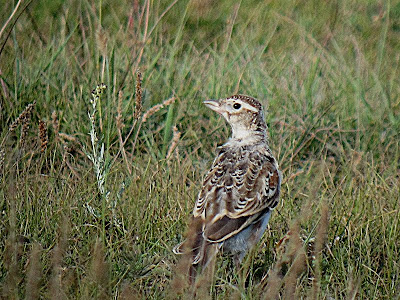 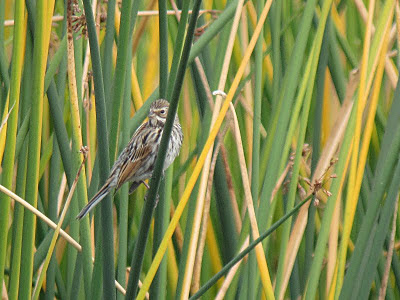 Note: all photos above were digiscoped (hand-held) with a Canon Powershot S95 connected by a self-made adapter to a Swarowski ATS 80 HD scope with the zoom lens (20–60x) set at 30x. 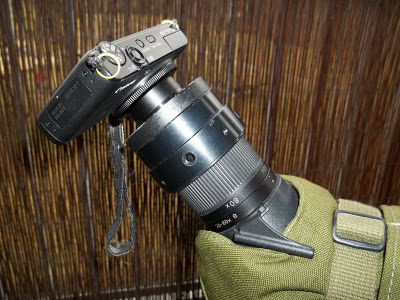 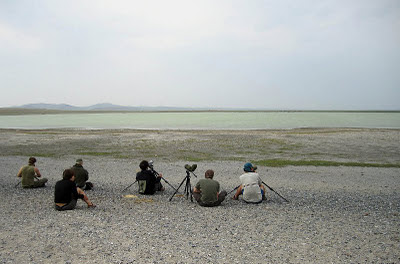 >>Western Marsh Harrier – A juvenile hunted the marshes on the 5th providing a comparison with the following species. The plumage was a uniform dark brown with contrasting cream wing-covert patches.

-- may be dark Eastern MH. I have seen such fledglings in the Selenga River delta.

Your blog is wonderful ! I would like to ask you something. Recently while travelling through the gobi desert I saw hundreds, if not thousands of small birds flying in flocks over the Gobi very low over the ground (1 -5 m). They would rise up from the snow as our vehicle approached them, fly in swarms for soe distance and then again settle down. I wondered what birds these are. Can you give me some idea?
Thanks in advance.

@ Igor: Thanks for commenting. Is there a way of separating such dark eastern juvs from western juvs?

@ Indranil: Thanks for your nice words! About your very numerous small birds in the Gobi: There are three species which could be involved: Lapland Bunting (Calcarius lapponicus), Horned Lark (Eremophila alpestris), and Asian Short-toed Lark (Calandrella cheleensis). The bunting can occur in rather large groups, but probably not in thousands. Horned Lark can form very large flocks (soemtimes 1000s), and Asian Short-toed Lark forms often flocks of 1000s of birds. Also mixed flocks can occur.

Axel,
there are some good approaches:
- young Eastern MH has a well-present pale field at base halfs of five inner primaries (to look from below!), while young Western MH has other light pattern in that part of wing (by words of Bill Clark, it is very good feature for ID);
- head pattern: young Eastern MH has dark "ear-spot" doing not contact with an eye, while Western has dark "eye-band" prolonging to forward to the eye or before it;
- if the bird is definitely young and if it has a lighter rump it is exactly Eastern MH (but if it does nit have it this feature is unusable);
- if the bird is young and if it has good light pectoral band going to shoulders and back it is Eastern MH. Western have either no one or week or no expanded to the back.

However, these methods do not work in the next situations:
(a) if you deal with a hybrid Western x Eastern MH. In this case, only the head pattern can work well, and perhaps the form of the head patterns can identify hybrids (while four other approaches seem to do not);
and (b) if the bird has atypical coloration (for example, some chicks of Eastern MH have a wholly light head, and indeed no chance to use a head pattern; Western MHs can have the same feature; also completely dark chicks occur rarely in both the species).

PS: There was some discussion about a strange marsh-harrier seen in Korea: http://www.birdskorea.org/Birds/Identification/ID_Notes/BK-ID-Marsh-Harriers.shtml There is something more there.

Thanks for your comments Igor!