In August I decided at very short notice to spend all of September in Mongolia. Right after my arrival I joined Amarkhuu and Bolormunkh of the Wildlife Science and Conservation Center of Mongolia (WSCC) on a brief (14:40–16:40 h) visit to the “famous” UB Ponds on 3 September 2011. Thanks guys for transport and company!

Abu mentioned in one of his recent posts “...UB-Ponds where wefound 3 singing Yellow-breasted Buntings. Apart from a maraudingstray-dog, ... we did not see anything else noteworthy.” But even when there are no “exceptional” birds around: I found that these ponds are always worth a brief visit (at least 2 hrs at the site needed), especially since they are very easily reached from downtown UB (in less than one hour)! 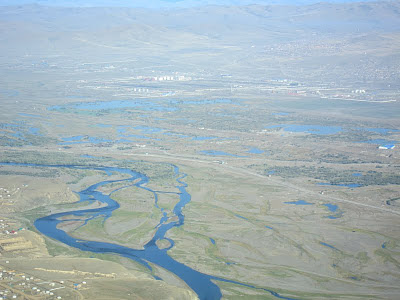 After checking the ponds (highlights: Swan Geese, Baillon’s Crake) we stopped briefly at the foot of Songino Khairkhan Uul, bordering the Tuul River. Impressive were at least 600 (and probably more!) Black-eared Kites gathering in the area over the mountain and the floodplain, apparently heading to roost in the gallery forest of the Tuul River. The largest concentration of this species I’ve ever seen in the UB area!

In total we logged 42 species during 2 hours of birding: