13 MAR 2007, Khovd
Some snow in the afternoon - quite rare here in Khovd, where we get c.120 mm annual precipitation only.

11 MAR 2007, Khovd - A. & K. Braunlich
The first two Ruddy Shelducks of the year, flying over the completely frozen Buyant gol.

10 MAR 2007, Khovd - A. Braunlich
One very early Red-throated Thrush near the stadium.

28 FEB 2007, Khovd - A. Braunlich
A flock of c.375 Twites was almost 10 times the maximum I had for this species here in Khovd in 2006. First signs of spring migration were 1 Black-throated Thrush and 10 Fieldfares. Other birds included 1 Merlin near the (frozen) river and local winter visitors as Meadow Bunting (c.20) and Long-tailed Rosefinch (10).

20 FEB 2007, Khovd
After a very “warm” winter, with temperatures almost never dropping below minus 30˚C the maximum day temperatures reached impressive +3˚C (night -8) today, and we had the first dust storm of the year – unusually early! 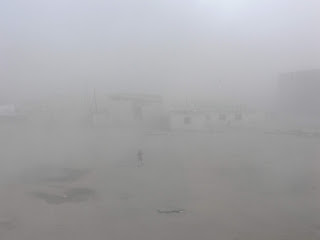 View from my kitchen window during dust storm - no birds...

28 JAN 2007, Manzshir Khiid (monastery) - A. Braunlich
c.18 km SE of Ulaanbaatar, southern side of Bogd Uul (mountain with forest steppe). Black Vulture 5 (some wintering in Mongolia), Chaffinch one male (rare in winter), Red Crossbill many, Two-barred Crossbill >10. A good selection of woodpeckers, with Black, Lesser Spotted, Great Spotted and Grey Woodpecker all seen within c.50 m of each other! 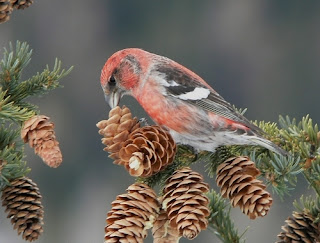 08 JAN 2007, Ulaanbaatar - A. Braunlich
1 Black-throated Thrush in the garden of the Japanese Embassy. A rare winter record.

01 JAN 2007, Khovd - A. Braunlich
1 Rough-legged Buzzard hunting in a plantation. My first observation of this species in Khovd ever (though it is a regular winter visitor in the region), and species no. 193 for Khovd since late October 2005.