Year of the Iron Tiger

On the occasion of the new lunar year I would like to wish you a roaring year with success, peace, health, love and prosperity. Ta buhendee sar shiniin mend hurgeye. Saihan shinelcgeegeerei. Happy Tsagaan Sar!

However, although this is a happy occasion, many Mongolians are suffering right now through an unusually terrible dzud this winter. Please read the post by my friend, the American monk Konchog: click here. May be you can help. 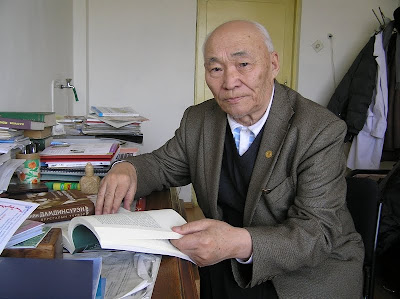 We are deeply saddened to announce that Academician, Professor Osor Shagdarsuren passed away on Tuesday, 2 February 2010, at the age of 81. He was highly respected biologist, ornithologist, educator, and father of three. The Mongolian scientific community has lost a prominent scientist and educator.
Professor O.Shargdarsuren was born in 1929 to a herder family in Matad Sum, Dornod Aimag. As with many Mongols of his generation, he spent his childhood time on the vast grassland steppes in eastern Mongolia herding sheep and goats. He graduated from the Matad Sum Middle School in 1948, and subsequently entered the Chemistry and Biological Department of the National University of Mongolia. In 1955, he graduated from the University and returned to his home town as a teacher. Following his dreams he returned to Ulaanbaatar. At that time, Mongolia was at early stages of exploring its wildlife and biological resources with the cooperation of Russian scientists. Soon his talent shone. Professor Shagdarsuren garnered a recommendation to go to Moscow to study biological sciences where he studied the ecology of birds of prey in central and southern Mongolia for his PhD degree under the supervision of renowned Professor G. P. Dementiev at Lomonosov Moscow State University from 1961-1964. After successfully completing his study in Russia, he returned home as the first ornithologist in his country. At that time, he was much-needed because Mongolia contained very few educated people in the natural sciences. Having graduated from one of the top universities in the world, he continued his work and expanded his research to mammals, animal husbandry, and ecology and evolutionary biology, at same time he undertook several positions of responsibility at the University and the Academy of Sciences. For many years, he studied game animals and pastoral livestock husbandry in Mongolia. Later he earned his Doctor of Sciences degree, again from the Lomonosov Moscow State University in 1972.
Professor O. Shargdarsuren was an active creator, developer, and supporter of the leading scientific and higher educational institutes in the country. He served as the Director of the Institute of Biology at the Mongolian Academy of Sciences from 1964-1982, and continued as the Science Secretary from 1982-1983. Afterward, he worked as President of the National University of Mongolia for six years until 1989. Until his final days he remained an honored professor at the National University of Mongolia and continued teaching in the Department of Zoology.
He was elected as a Corresponding Member of the Mongolian Academy of Sciences in 1982 and became an Academician (full member) in 1991, and also received his Professor title in 1984. He was honored by his scholarly colleagues at the National University of Mongolia and the Mongolian Academy of Sciences for his lifetime efforts and accomplishments for developing and creating these important scientific institutes.
Professor O. Shargdarsuren was the lead researcher of Mongolian scientists working in the Joint Soviet-Mongolian biological expedition of the Russian Academy of Sciences and Mongolian Academy of Sciences and also the Joint Mongolian-German Biological Expedition until 1990. He was chief editor and lead author for many scientific publications resulting from these two significant international expeditions. He also served as chairman of the Scientific Committee for Doctorate Degrees in Biological Sciences for many years.
He wrote over 200 papers and publications including some 20 milestone monographs such as “Raptors of Central and Southern Mongolia and their practical importance,” “Rare mammals of the Mongolian People’s Republic,” “Contributions to the study of mammals in the Khangai Mountains,” “Issues in the conservation and management of mammals of Mongolia”, “Game animals and their conservation in Mongolia,” “Natural selection and nomadic livestock husbandry,” “Pastoral livestock husbandry and related issues in theoretical biology,” and “Pastoral livestock husbandry in Mongolia.” Several species discovered new to science bear his name. Furthermore, based on his own research results and eagerness to transfer his knowledge and experiences from the formal halls of the university to practice in real life, he led several wildlife management projects that were never before practiced in Mongolia, such as the introduction and translocation of Musk Rats to Khar Us Lake and Mongolian Gazelle to the Khomiin Steppes in western Mongolia.
O. Shagdarsuren was an inspirational teacher and mentor for many young researchers, and a renowned professor of the National University of Mongolia. During his years of teaching in the largest university in Mongolia, he mentored countless excellent students and supervised over 20 Ph.D. and Doctorate candidates, and offered advice and guidance to many more. He also authored many textbooks on biology and ecology subjects including “Zoology I,” Zoology II,” “Pastoral livestock husbandry and its theoretical foundation,” and “Essentials of Ecology”, and published numerous articles and essays in mainstream newspapers, magazines, and journals. It is said that every biologist in Mongolia met with him and was taught by him. 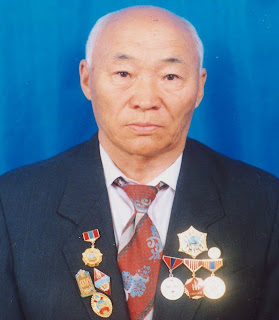 Professor O. Shagdarsuren was not only an educator and good scientist, he was an important political and social activist too. Several times he was appointed as a Representative to the People’s Great Congress, elected as honorary Mongolian consul to the Biophysics Center of the Council for Mutual Economic Assistance Organization (the largest international economic organization for cooperation during the Soviet era), Chairman of the Mongolian Union, and Director General of the Mongolia and India Friendship Union. Finally, he was actively involved in various governmental committees on science, technology and higher education.
The Government of Mongolia praised his many years of productive service for the country and decorated him with several high ranking medals and honors, such as the Mongolian State Honorable Teacher, Order of North Star, Honorary Credential of the Government of Mongolia, anniversary medals of the People’s Revolution of Mongolia, and Best Employee titles from educational, science, agriculture, and environmental sectors.
Professor O. Shagdarsuren was very kind man and a true scholar, committed to and passionate about his work until the end of his life. His deep and broad knowledge, teaching skills, and friendship will be sorely missed by his family, relatives, colleagues, friends, and thousands of his students around the country.
Ministry of Education, Culture and Science of Mongolia