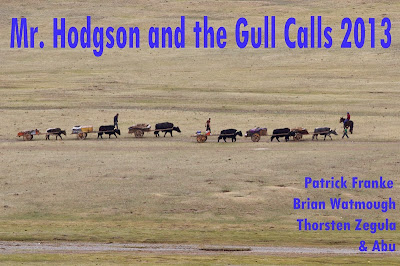 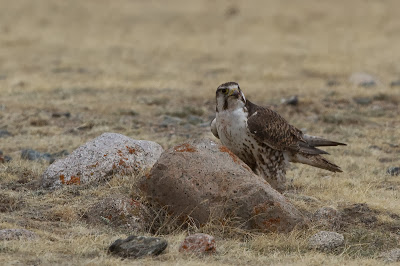 Adult Saker Falcon, near Khukh Nuur,
Bayankhongor, May 2013, © A. Buchheim 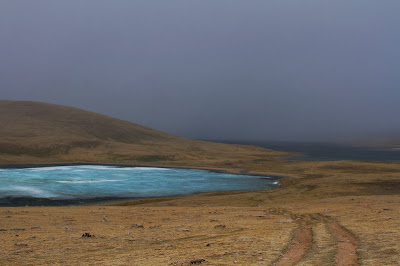 Khukh Nuur during/in/behind a snow shower,
Bayankhongor, May 2013, © A. Buchheim

Our arrival at Khukh Nuur in Bayakhongor aimag (province) was graced with another Saker Falcon on 31 May. Very soon after we were in the centre of a heavy snow shower which showed us that we were high up in the mountains. Several other showers followed until nightfall but the snow melted away very quickly. We chose to camp at exactly the same spot near the gull colony as the Mountainbirds 2012 Group did last year (see here). 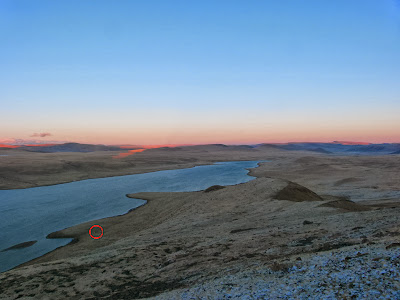 Despite the many approaching snow showers I climbed up half of the slope to see what was around and with ease I found several Asian Rosy Finches (sushkini) and then even a pair of Hodgson’s Bushchat, the latter not far from our camp. In fact, later we found that there were even two pairs around. Because hard winds were driving the snow I hadn’t taken my camera (anyway the light was fading already) and I had to take shelter every now and then. Nevertheless, it was a kind of relief to see the aforementioned species, ready to be bagged by my friends the next day.

Indeed, the next morning everybody was out for the bushcats, the rosy finches and also for Altai Snowcocks. For me that meant I had to wait for my companions to return before we could start to catch the gulls. From the camp I saw that Patrick was very close to a group of six snowcocks which I could hear from the distance (about 1 km away). The rosy finches came down to the lake shore where they took advantage of the mass emergence of flies (as did other birds like Citrine Wagtail, Brown Accentor and Northern Wheatear). While sitting in our camp, with a cup of tea in my hand, I managed to see all three target species (the bushchats were at the same spot still and were also spotted from the camp). 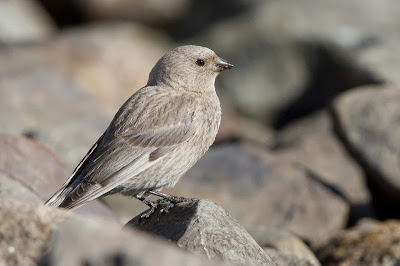 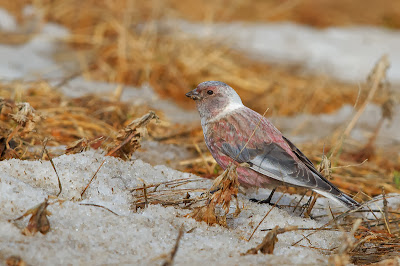 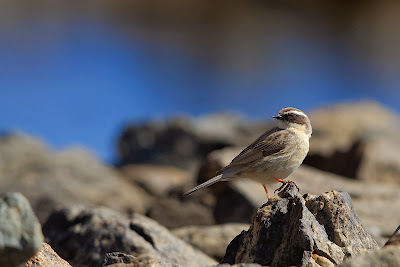 58 adult Mongolian Gulls were captured and processed which kept us busy for two days. With 115 gulls tagged this year the grand total stands now at almost 950 (tagged in 10 colonies across Mongolia plus in one colony at Lake Baikal, Russia), so watch out! See also here for reporting wing-tagged gulls. We invested two more days to explore this pristine alpine region and by doing so we found a third pair of bushchat. Unfortunately, last year’s territory was not occupied and all the chats we saw were not bearing rings until we caught and ringed one of the males that resided above our camp on 4 June, the day we left the lake. 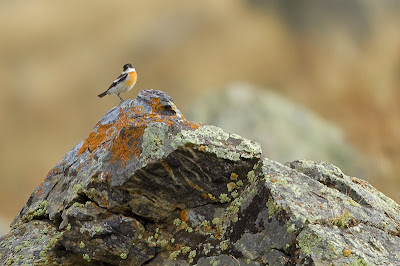 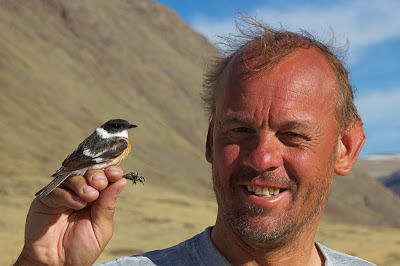 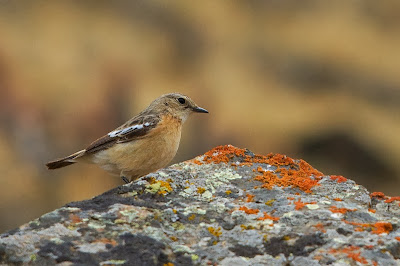 The resident species performed well but we also found some migrants: there was a Common Coot on the lake on 31 May, a small flock of Ortolan Buntings, 7 migrating (?) Demoiselle Cranes on 1 June, 1 adult and a 2cy Black-crowned Night Heron (a rare migrant and exceptional breeder in Mongolia) were flushed from the bushes on 2 June, a single Dunlin was near the camp the same day, about 10 very elusive Pallas’s Grasshopper Warblers successfully avoided being photographed on 3 June when we also logged a pair of Red-crested Pochard, 5 Pied Avocets, 1 Siberian Chiffchaff and a Two-barred Greenish Warbler. On 4 June we had 3 Common and a single White-winged Tern. Another noteworthy bird was the singing Common Nightjar on 2 June. 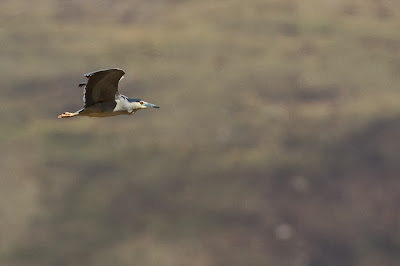 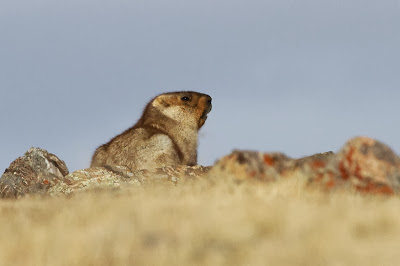 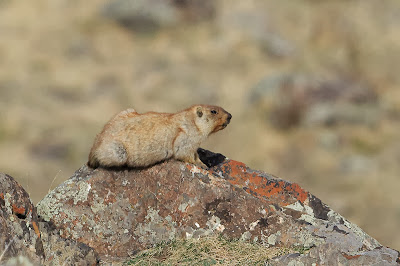 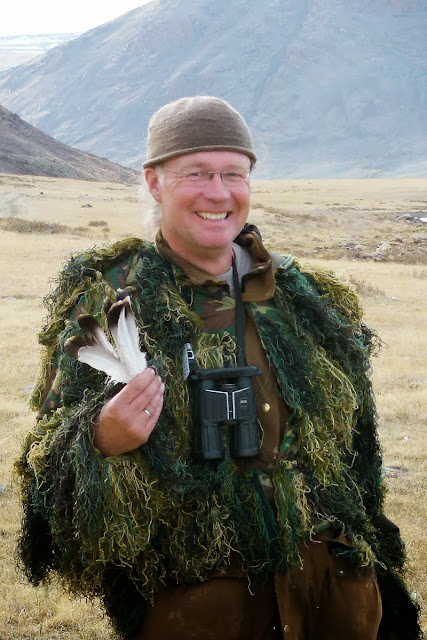 The Altai Snowcocks were recorded daily in the rocky parts of the slope not far from the camp but occasionally they ventured out into the more grassy areas. Patrick was taking a lot of sound recordings and while he was leaning against a larger rock one morning, a snowcock came around the corner and he could literally have caught it with his hand. He was too baffled to do this, unfortunately. Presumably, the snowcock was at least as baffled as he was! 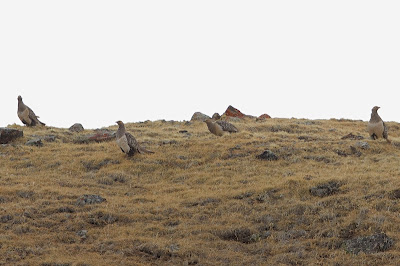 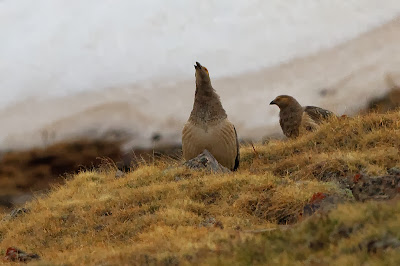 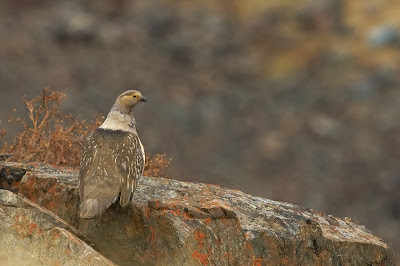 This Altai Snowcock landed on the rock below me,
Khukh Nuur, Bayankhongor, Jun 2013, © A. Buchheim 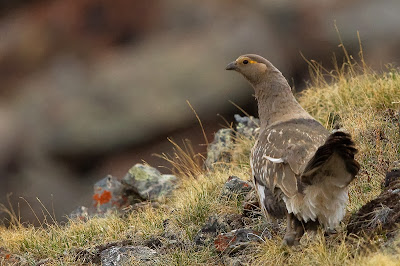 Although both species of Mongolian Lagopus occur at Khukh Nuur it again proved impossible to get Willow Grouse photographed. They always flew off too early and landed well out of sight in “their” bushland. In contrast to that, the Rock Ptarmigans could only try to hide behind rocks and this made it easier to follow and photograph them. While the females were already wearing the summer dress all males were still in complete winter plumage. 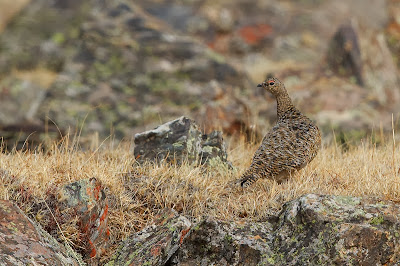 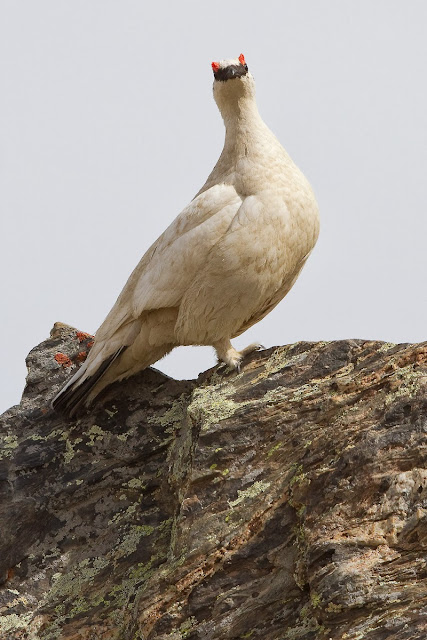 Several pairs of Stejneger’s Stonechats were found, some even within the territories of the bushchat and telling the females apart is not always straightforward. Of the three species of redstarts that breed around the lake we failed to find Eversmann’s. The other two species, Black and Güldenstädt’s Redstarts were even recorded near our camp. 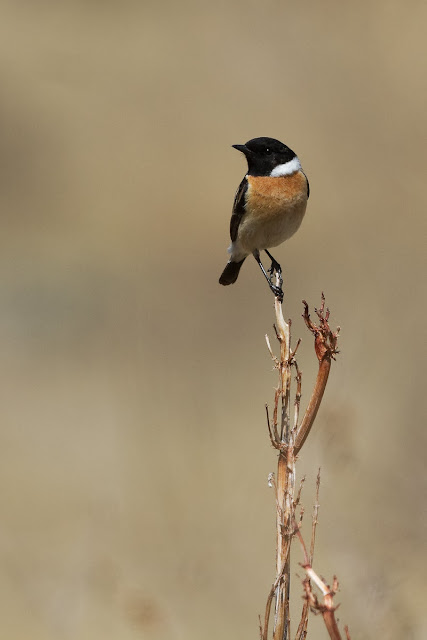 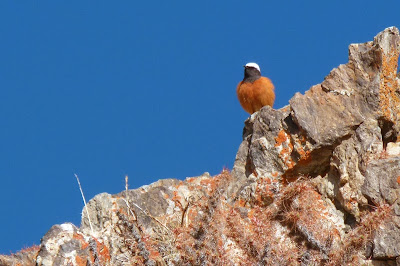 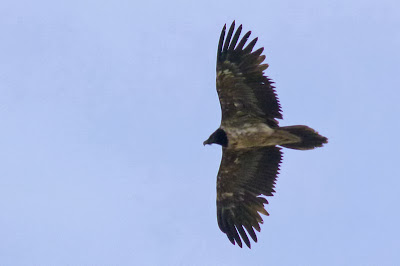 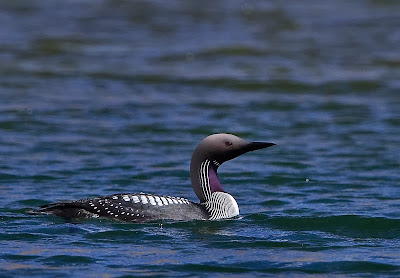 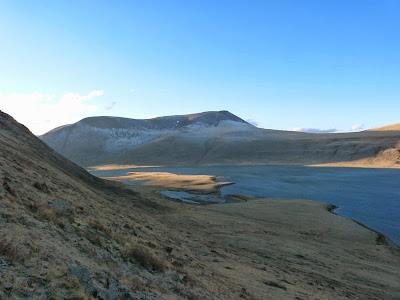