The following is the first part of a text Marshaling the Winds of Mongolia by Dylan Walsh, published on 22 Feb 2012 in: The New York Times, Green, a blog about energy and the environment

“Mongolia’s first wind installation is a $120 million project that will provide 5 percent of the country’s electricity demand. Transmission lines were installed last year, while turbine construction waited out the fierce Mongolian winter. It is scheduled to begin in March.” Read more here. 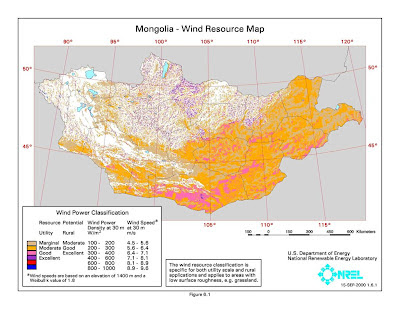 A PDF “Environmental and social impact assessment of the Salkhit Uul wind park, 30 November 2008” can be downloaded here.
No comments: 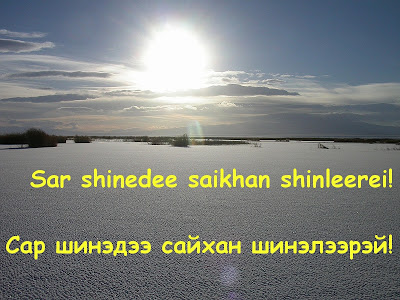 One pollution less
and a rushed twitch

In the morning of 12 February 2012, Huyagaa and Amarkhuu, both members of the Mongolian Birdwatching Club picked me up. We were joined by Megaa a little later and then went to the south side of Bogd Khaan Uul to pay the famous Manzshir Monastery a visit. This has been productive several times before (for example: click here) and we hoped to see some nice forest species there.

As we left the car 5 Eurasian Black Vultures crossed the valley and near the parking-lot some corvids hoped for something to feed upon. 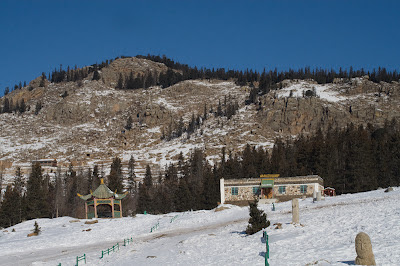 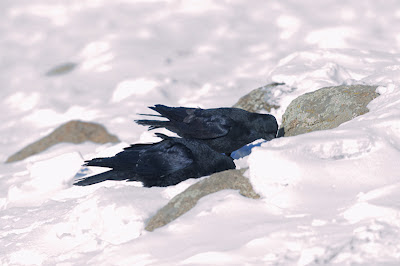 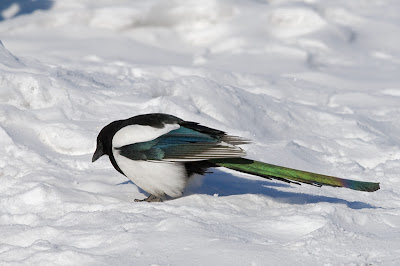 Further up in the forest there were several flocks of Eurasian Tree Sparrows loosely joined by Eurasian Siskins and a few Common Crossbills. Some of the crossbills were in full song already. Food supply for them is huge this winter and we saw several groups of crossbills during our visit. 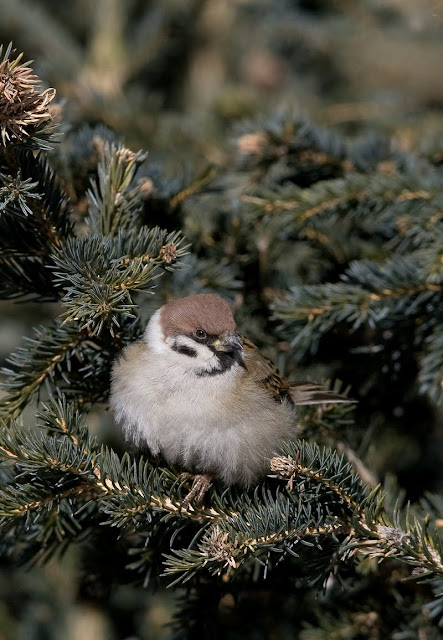 Today I understood why they are called
Eurasian TREE Sparrows, Manzshir Monastery, Feb 2012 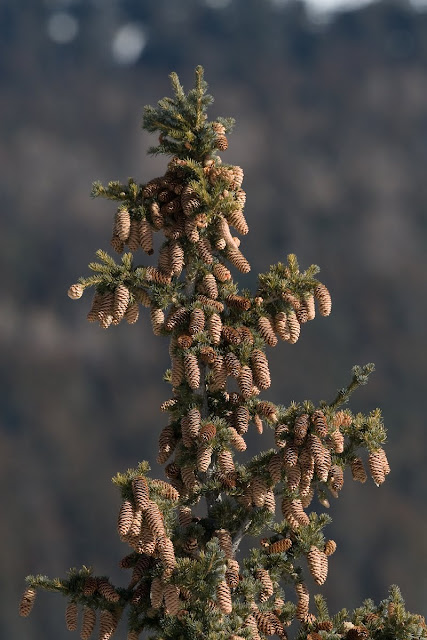 A lot of cones were available this winter,
Manzshir Monastery, Feb 2012 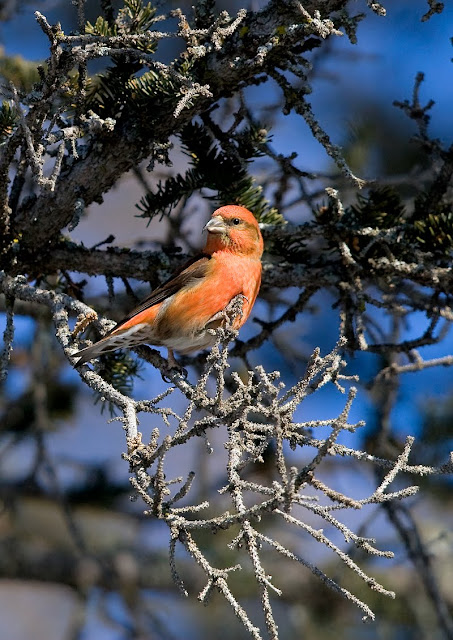 Coal Tits were also singing everywhere but the many Willow Tits we saw did only give their subsongs. Spotted Nutcrackers also showed kind of territorial behavior already and we saw a group of 8 birds and another group of 3 birds while walking through the forest. In contrast to this we encountered only one Eurasian Jay. 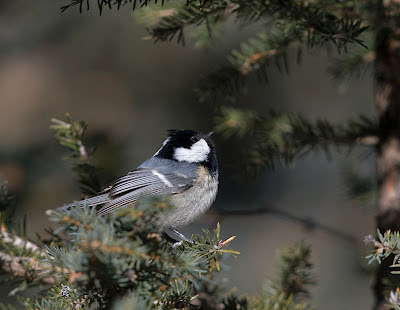 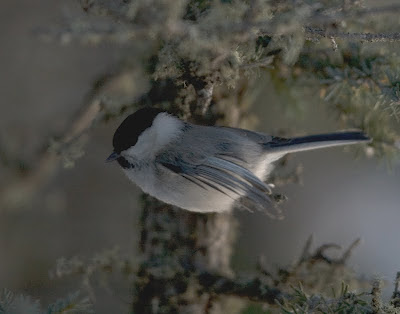 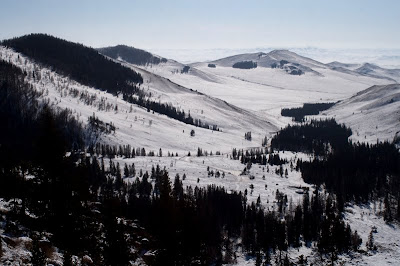 The valley viewed from the top of the rocks
(cf. first pic of this post), Manzshir Monastery, Feb 2012

After we found another big flock of Eurasian Siskins which was loosely joined by 4 Siberian Accentors we went back to the parking lot. On the way a Lesser Spotted Woodpecker—the only woodpecker we saw there on this trip—crossed our path.

Striking was the complete lack of redpolls of any kind. These had been one of the most common birds around Ulaanbaatar during previous winters. We saw them even in the steppe of Khustai Nuruu NP in huge flocks, so huge that we joked about the big “redpollution”. But this winter, despite many days out at different sites not a single redpoll was recorded—thus there was one pollution less for the area.

As there was some time left we decided to see whether the European Greenfinches (see here: click) would be around and Amarkhuu offered to check for the Common Coot which was found during the waterfowl-count a week before (members of the Mongolian Birdwatching Club counted among other birds: Mallard 63, Common Goldeneye 13, Ruddy Shelduck 223, Goosander 7, and impressively Bohemian Waxwing over 1000).

At the UB Ponds we quickly relocated the coot among the Mallards, Common Goldeneyes, Goosanders and Ruddy Shelducks and went back home after a very nice day of birding. Thanx guys for your enjoyable companionship! 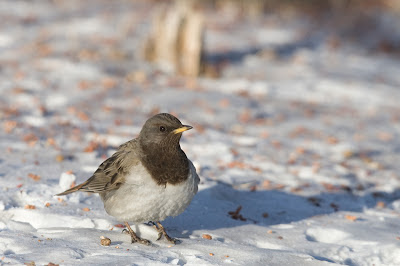 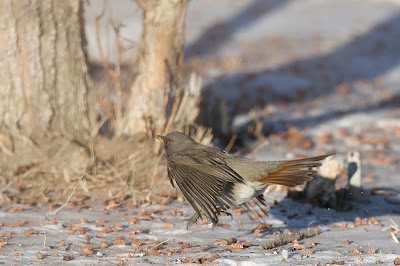 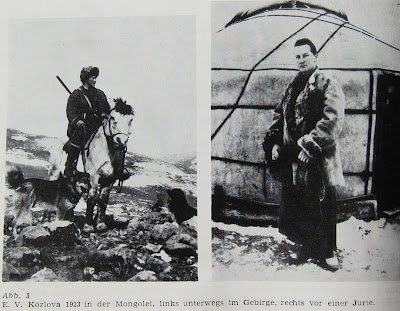 January 2012 has been colder than average here in central Mongolia. Only during a few nights—early in the month—the temperature did not fall below minus 30°C (-22°F), but even the “warmest” night was minus 27°C (-16.6°F) cold. At the end of the month temperatures dropped even below minus 40°C (-40°F), making birding an unpleasant affair unless done from your flat or from a car. I did the latter on 31 January and went to the area below Songino Khairkhan Uul to check whether the European Greenfinches (see previous post) were still around and whether I could take some more pictures. 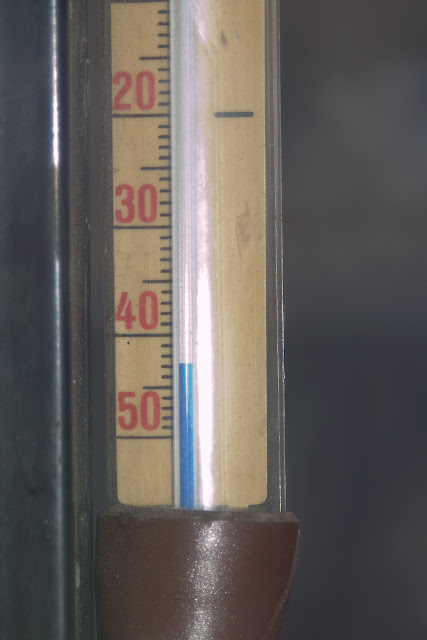 I arrived at 10 a.m. and soon re-found the flock of European Greenfinches, but they were immediately spooked by a guy and his (?) cows, not to be found again that day. Birding was hard as birds were few but being out of the smog was good enough for me. 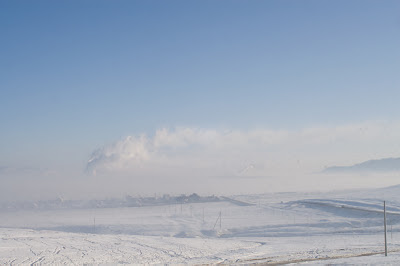 Ulaanbaatar under a thick layer of smog, Jan 2012

As I waited for the greenfinches to return to their favoured spot a (the?) male Güldenstädt’s Redstart (see previous post) moved along but was too far away and disappeared to somewhere. The redstart’s berry-bush was totally covered by frost and if there had been some berries left they most probably were now inaccessible. The sewage stream had become a very narrow one, usually about 4 to 6 m wide it was now only 60 cm wide and a lot of ice was floating on it. 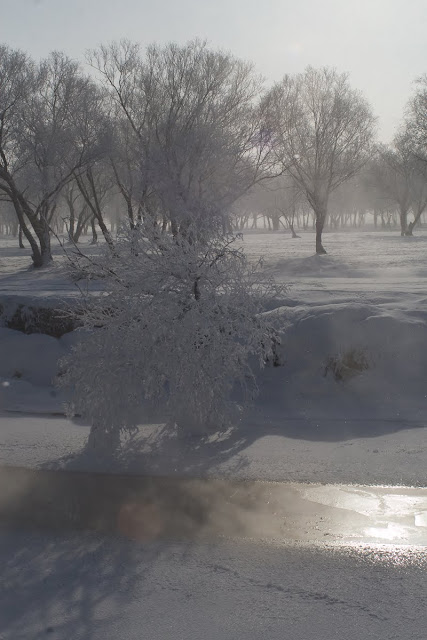 The redstart’s bush on the banks of the almost totally frozen
over sewage stream, below Songino Khaikhan Uul, Jan 2012

No less than 27 Azure-winged Magpies were taking their toll on the berries but somehow the managed always to keep their distance, thus, again, I was unable to get close enough to take some acceptable shots. 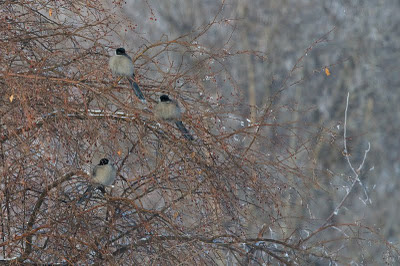 Azure-winged Magpies taking a nap in a tree,
below Songino Khaikhan Uul, Jan 2012

In general, photographing was difficult, not only because of the freezing temperature but also because it was sunny and I was trying to take pictures from inside the car. Most pictures I took showed the impact of “frost-haze”: the sun warmed up the car and the warm air (what do I write?—it was not warm, just warmer than the outside air but still so cold that the snow I had brought in with my boots did show no signs of melting!) caused the haze directly in front of the window where it met the cold air, not very funny if you go out for almost nothing. As Axel had asked me to take some habitat-pictures I left the car several times and tried to accomplish this. 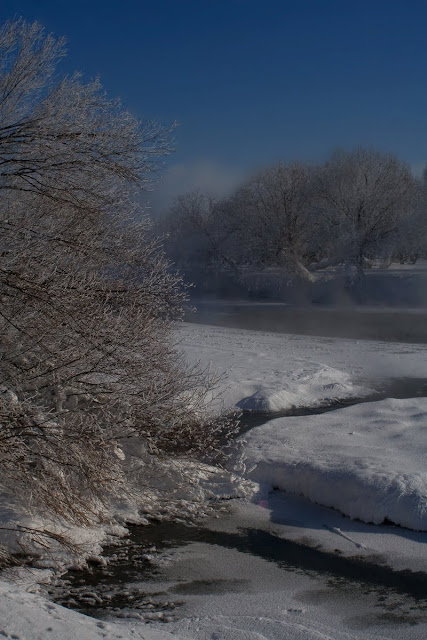 Bushes and the sewage stream,
below Songino Khaikhan Uul, Jan 2012 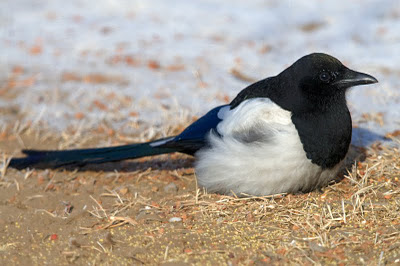 I had put out some seeds for the greenfinches but the corvids were quick in discovering this and ate most. The only remaining turdids were all Red-throated Thrushes and they were quite keen in keeping away conspecifics from their respective territories. 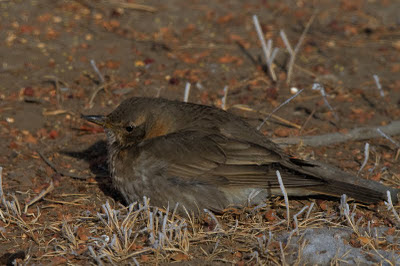 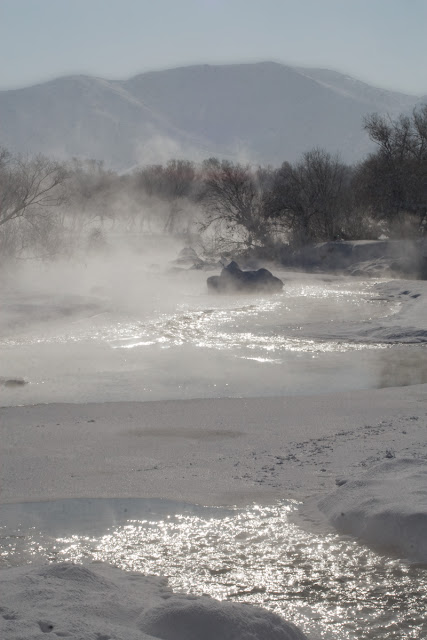 A more open stretch of the sewage stream,
below Songino Khaikhan Uul, Jan 2012

Bohemian Waxwing I saw about 150 today and a few Great Tits as well as few Azure Tits searched for food in the trees. At 12:45 p.m. an Eurasian Black Vulture crossed the valley to land on Songino Khaikhan Uul, may be it had fed on Ulaanbaatar’s rubbish tip. A lonely (?) Ruddy Shelduck flew upstream and the coming weekend will tell how many of them are overwintering in Ulaanbaatar this winter. I returned after 4 hours and boy—I had very cold feet!
1 comment: