On 7 July 2009 I recorded a wild cat at the Kherlen gol (gol=river), about 50 km west from the city of Choibalsan in eastern Mongolia. The geographical coordinates of the observation site are N 48°03’, E 113°44’. The habitat consists of long-grass steppe with single exposed rocks and boulders. About 600 m from the observation site a narrow “gallery bush forest” grows along the Kherlen River and its small side arms. 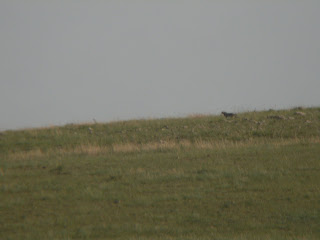 I observed the animal from about one kilometre distance for c. 30–40 minutes. The weather and viewing conditions were good. A slight heat haze had a marginal impact on the observation only. 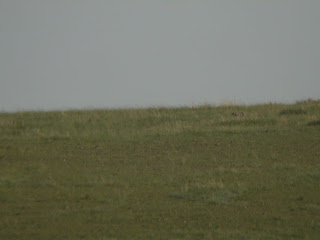 A few photos with a digital camera were taken through a telescope. Due to the great distance the photos came out quite poor, but they show the key features rather well. 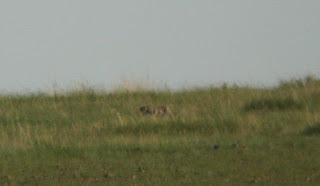 I am absolutely sure that the animal was a cat! The pelage colour was a washed grey without any conspicuous pattern (great distance!). The tip of the tail was black. The key ID feature was certainly the structure of the cat: Firstly, the cat had a very long tail which was held bent upward. And the animal showed strong, powerful shoulders. These features gave the cat an irbis-like or even leopard-like appearance. 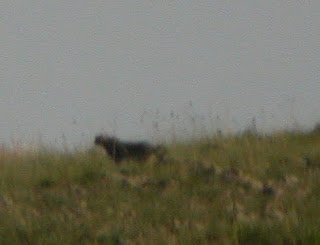 During the observation period the cat was slowly moving through the grassland on top of a hill, probably searching for food, though no hunting behaviour could be observed. It was presumably laying down several times (when it disappeared from my view). In dimension the animal appeared bigger than a normal domestic cat. Not far from it we discovered a family of Corsac Foxes later. Although we couldn't compare the two species directly, we had an indirect comparison of a canid and a felid. The cat showed typical movements of a cat. A confusion with a canid (occurring in the area: Corsac and Red Fox, Grey Wolf) can be excluded. 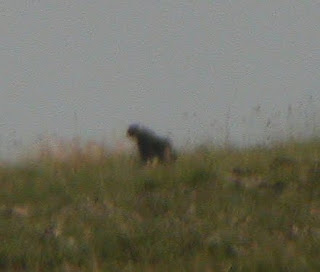 The only larger cat occurring in the wider area is the Leopard Cat Prionailurus bengalensis. This polytypic species is widely distributed from the northern Indian Subcontinent, northern China and south-eastern Russia to South-East Asia. The subspecies P. b. euptilurus, which is sometimes considered specifically distinct, is called Amur Leopard Cat. It occurs in the Manchurian region, Korea and Russian Far East. 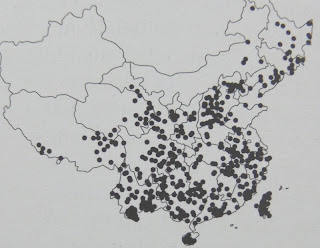 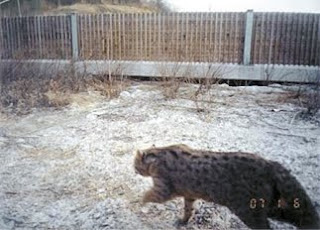 This photo of a wild Amur Leopard Cat in South Korea
shows the powerful shoulder area of this subspecies
quite well. From an article in JoongAng Daily. 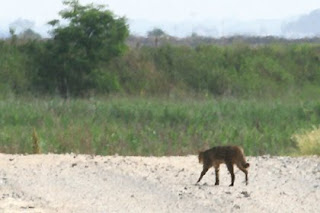 The species occurs mainly in forests, but “also in shrub forests, but not in grassland or steppe (except marginal areas and riparian ecosystems)” (Smith & Yan Xie 2008), though Wilson & Mittermeier (2009) write that they are also found – though rarely – in cold steppe grasslands. 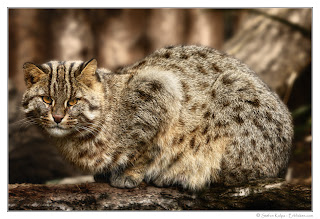 Leopard Cat has not been recorded from Mongolia and thus the observation described here would constitute the first record.

Tim Edelsten has commented as follows:

Just my thoughts based on my personal sightings/ impressions:

Although the images are not clear, it appears to have a thick greyish-brown coat with contrastingly paler chin and belly, and thick tail, which are typical for Amur Leopard Cat, (although which can also be shared with Feral Cat).

Structure-wise however, to me it shows the athletic build, strong and high shoulder, and proportionately longer body and sloping back of Amur Leopard Cat that would distinguish it from Feral Cat in my experience.

So without being sure, I would lean towards an identification of Amur Leopard Cat.

More comments on this observation are welcome!

Acknowledgments. My thanks go to Tim Edelsten for letting me use his photo of an Amur Leopard Cat from Korea and for commenting the observation. Stefan Kulpa kindly allowed to include his excellent photo of a Leopard Cat. Axel Braunlich did some background research and helped to write this contribution.

Resighting of Bar-headed Goose in India

Atanu Mondal recorded a collared Bar-headed Goose in a tank at Kamalapura, Hampi, Karnataka, southern India along with 11 other birds on 22 November 2009. (In India, an irrigation tank or tank is an artificial reservoir of any size). 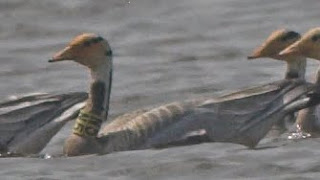 Martin Gilbert from the Wildlife Conservation Society has commented as follows:

Thank you for sending your report. The bird that you observed (yellow collar N9), is a female and was captured during our work in the Darkhad Valley, northern Mongolia on 17 July 2008. The approximate location of the bird’s capture was N: 99.41078; E: 51.19736. Interestingly, we have also received reports over the last few days of two other birds that we caught in Darkhad on the same evening, who have also just arrived in southern India and are currently at Magadi tank, in Gadag district, Karnataka.

Thank you again for sending in this information. I would be very interested to receive any further details of resightings of collared birds that you observe.

Best of luck, and good birding!