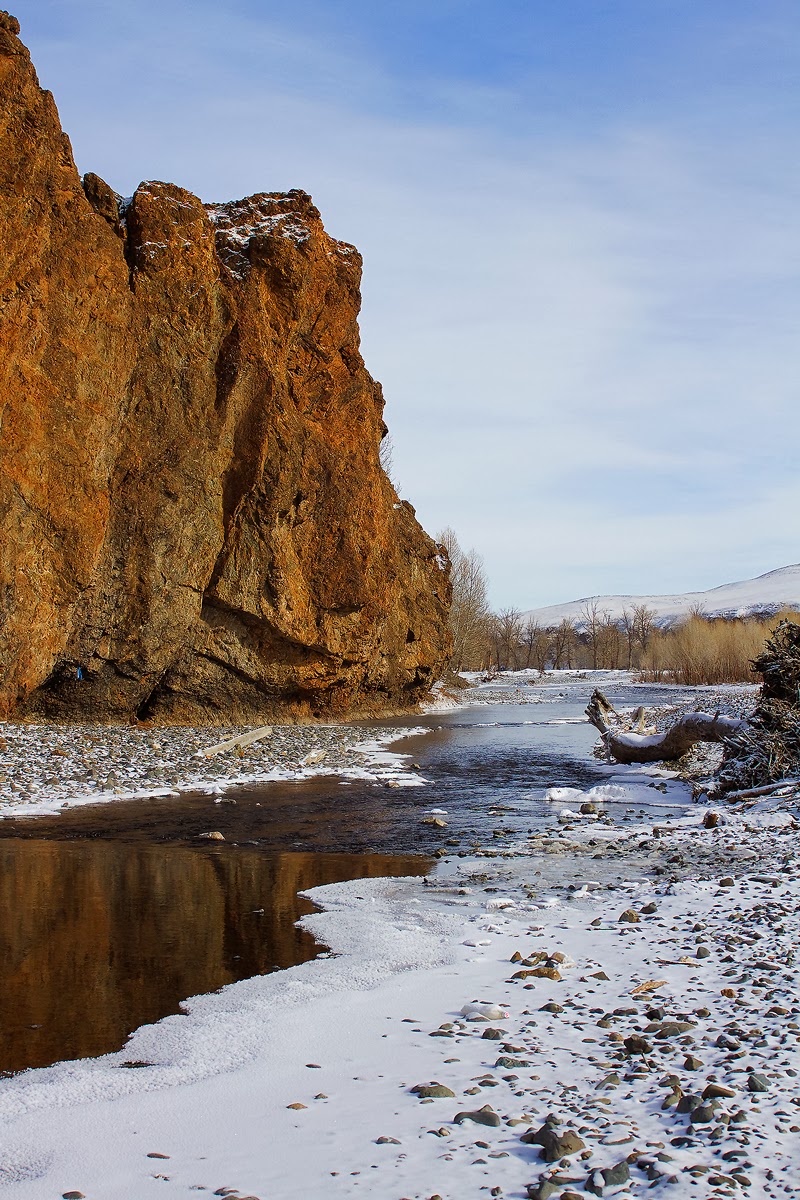 Solitary Snipe has always been on my “find it!” list. Not just because I have seen it once before only (in Japan), but mainly for my desire to get some good photographs of this species. The bird I had seen in Japan was feeding at the unreachable side of a small stream which I couldn’t cross. So whenever I was out during wintertime, especially when I was birding along the sewage stream in UB, I kept looking out for it, alas I never found one. The winter 2013/2014 was a mild one, given Mongolian standards: when I arrived at the end of November, the Tuul River here in UB still had open stretches. Temperatures had been rising to above zero (32°F) even in January and the nights had been “warmer” than they had been during previous winters. Only from 30 January to mid-February the night temperatures had fallen below minus 30°C (-22°F).

Temperature is one factor, water flow is another. The summers of 2012 and 2013 can be considered as wet summers, especially that of 2013. In summer, the water level of the Tuul River was too high to allow me to walk my standard transect along it. If this held true for other regions of Mongolia, then the combined factors made the winter of 2013/2014 an ideal one for finding a Solitary Snipe. Yet it was up to me to check out the right stretch of the right river.

Of course I started nearby at the Tuul River: Nothing, not even a White-throated Dipper (another species which I have been waiting for here in UB since a while).

Then the sewage stream: Nothing.

The only other chance that arose was on 9 February during the winter birding trip with other members of the Birdwatching Club of Mongolia. On that day I finally found one quietly feeding at the Urd Tamir River, just 2 km south of the city of Tsetserleg. Bingo! Tsaaa!

I approached the snipe in slow motion, but as the ground was covered with snow it was impossible to do so silently. Always when I started to move forward, the snipe stopped foraging and did not move a feather. This clearly was a sign of discomfort. I stopped and did not move a muscle (thanks to the lack of feathers I had to adopt a slightly modified strategy). After a few seconds it was apparently convinced that I would not pose any harm, and feeding in the shallows continued. Now it was up to me to move in closer and so I did. The snipe interrupted foraging again. And I stood still again until it was feeding again. The distance between me and the bird was still too big to get good pictures. The game between the snipe and me went on for long until I finally got almost close enough, I thought. That was a bit too close for the snipe. It stretched one wing and then performed a double wing flap. This behavior is shown by many species of wader just when they intend to take flight. But that was the last thing I wanted to happen. Time for my retreat! I did so as slow as I had moved in. As soon as the snipe was feeding again I started closing the gap step by step again. It took maybe five or six more times to freeze until I was only 15 m from the bird. Every now and then, when I watched it motionless, I had fired series of shots. Now I was close enough but had not enough light anymore. 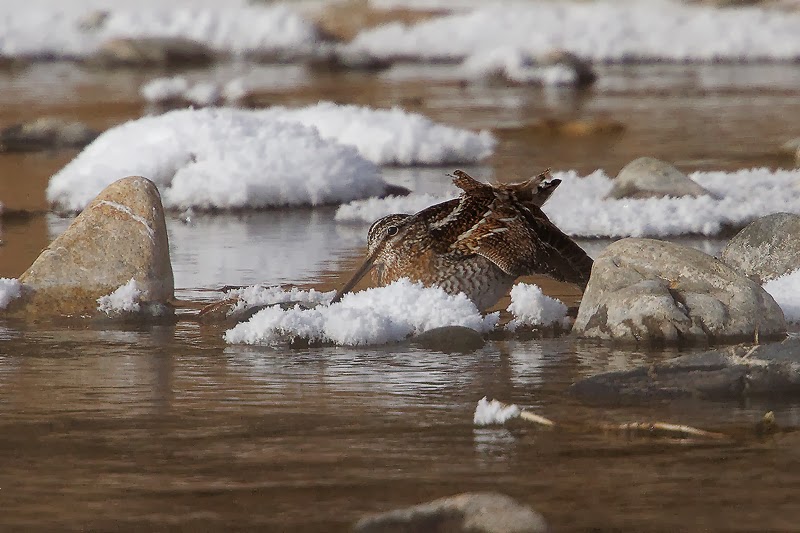 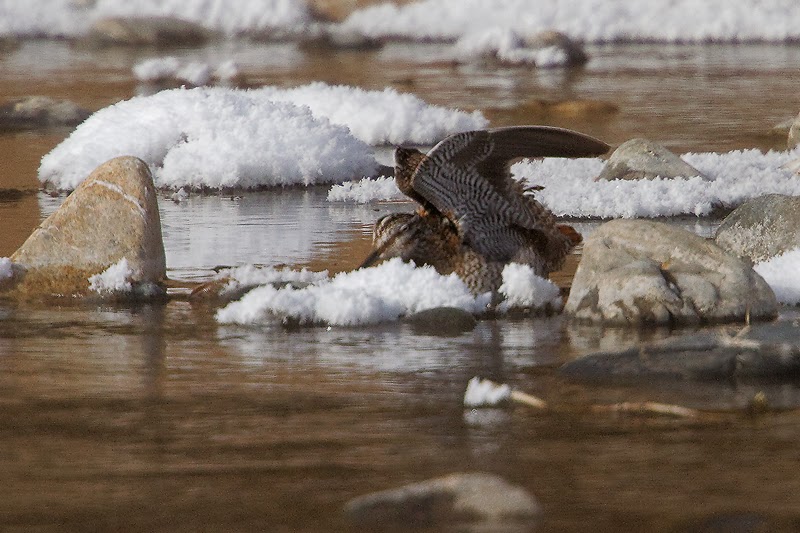 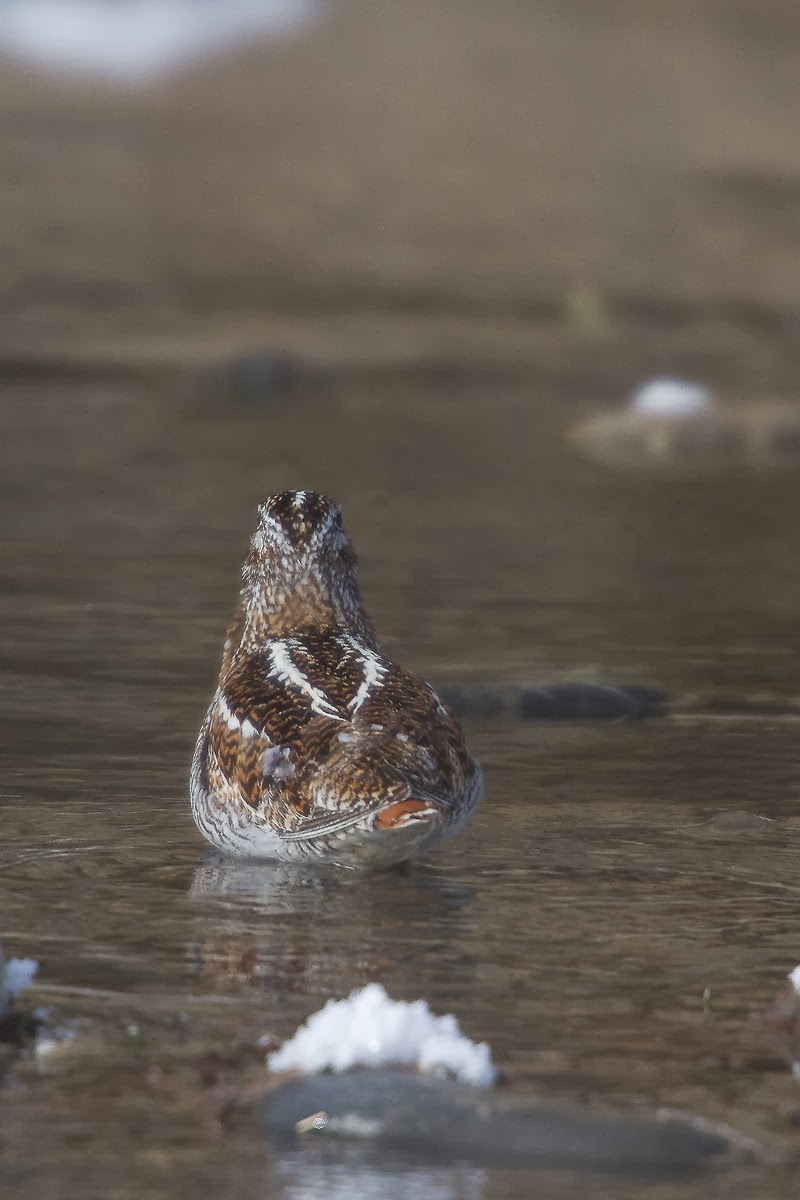 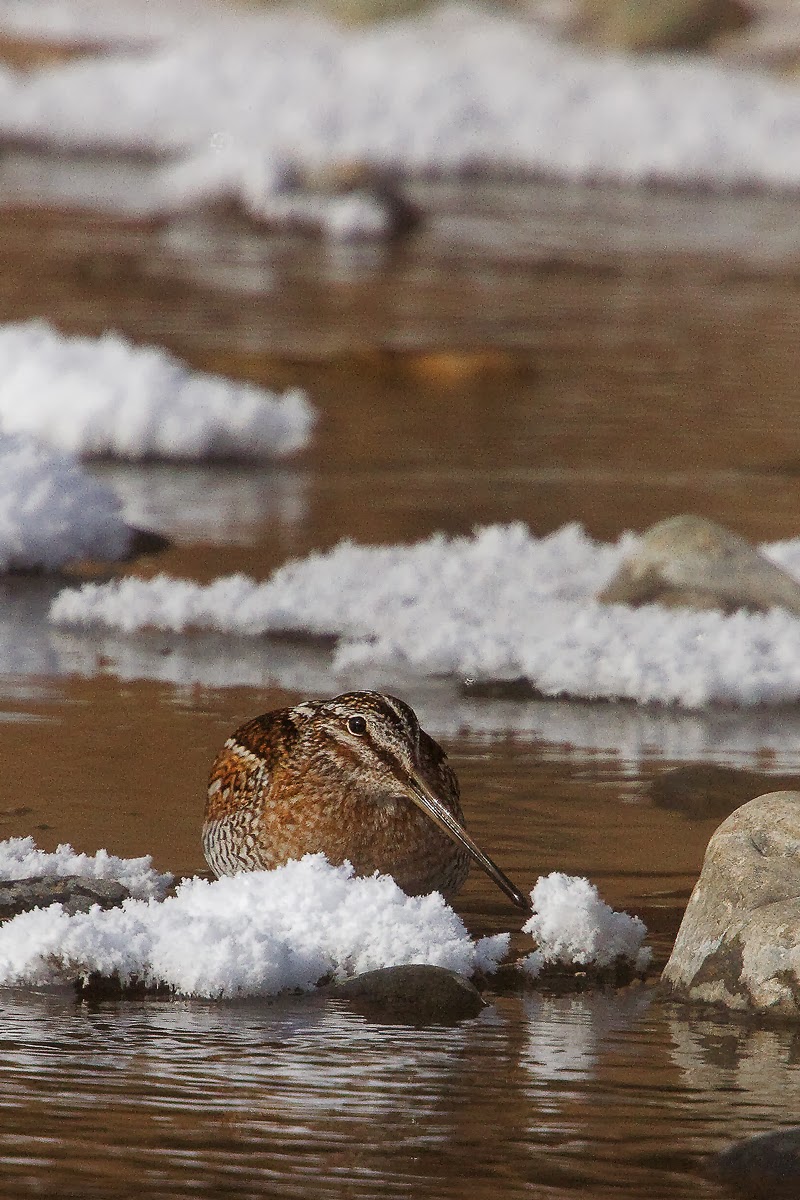 At times the snipe got alert and then moved a bit before it started feeding again. I could not figure out what it actually caught. Luckily I am not working on this species’ diet… 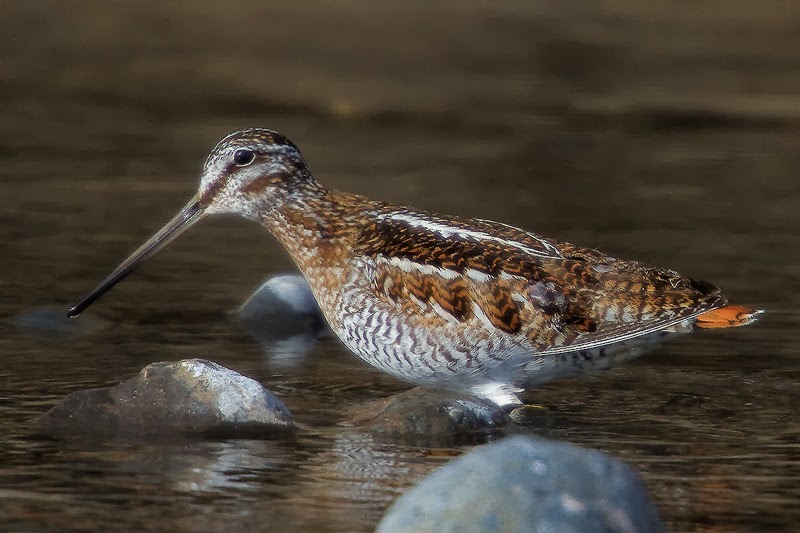 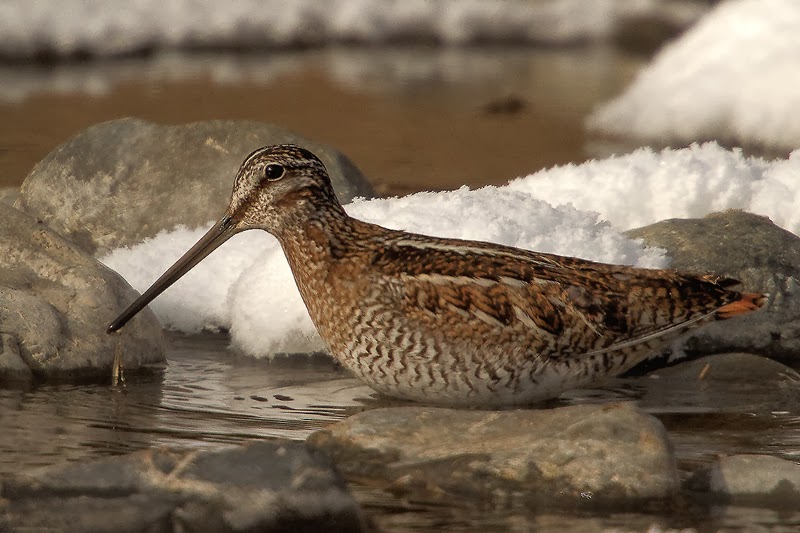 As I had been birdwatching on my own I went back to the car to show my find to Amarkhuu. Then we went back to Tsetserleg for a beer.

Note: Solitary Snipe has once been featured at Birding Mongolia before, with photos from the Khangai Mts and Khovd, and some more general information on the species in Mongolia: click here. 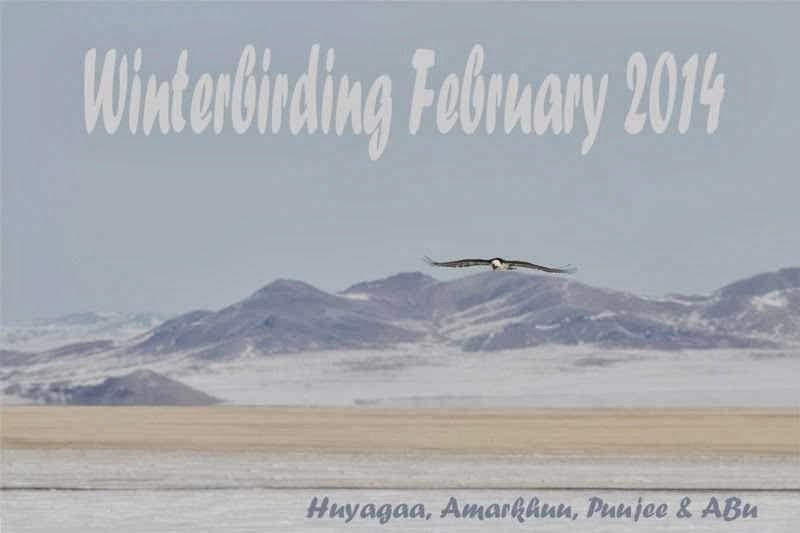 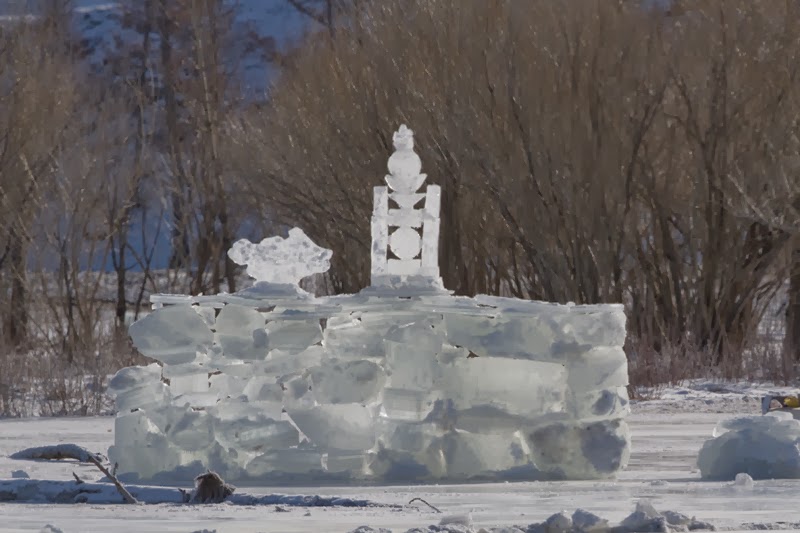 Unfortunately Huyagaa and Puujee had to leave in the morning of 9 February, so Amarkhuu and I were on our own then. We decided to try our luck on Solitary Snipe and drove c. 25 km to Tsenkher Hot Springs. Here we hoped to find it along the stream created by the spring. As we crossed the Urd Tamir River we saw that there was open water, but during our very brief stop the only bird we could add to our list was a singing Eastern Marsh Tit. The hot spring itself was disappointing. The open stream was only 100 m long before everything was frozen over—and there was no Solitary Snipe. To compensate our frustration we did some birding in the adjacent forest for an hour or so. The forest looked quite good, but despite the promising habitat we saw only a single bird: Eurasian Nuthatch. Even more frustrated we drove back to the Urd Tamir River. Not long after we had left the car we found a nice but shy White-throated Dipper. Ahhh, that was a relief! We continued and in the end we had seen even two dippers and a male Güldenstädt’s Redstart as well. Luckily, and finally, we found our Solitary Snipe which was feeding almost invisibly between some rocks! 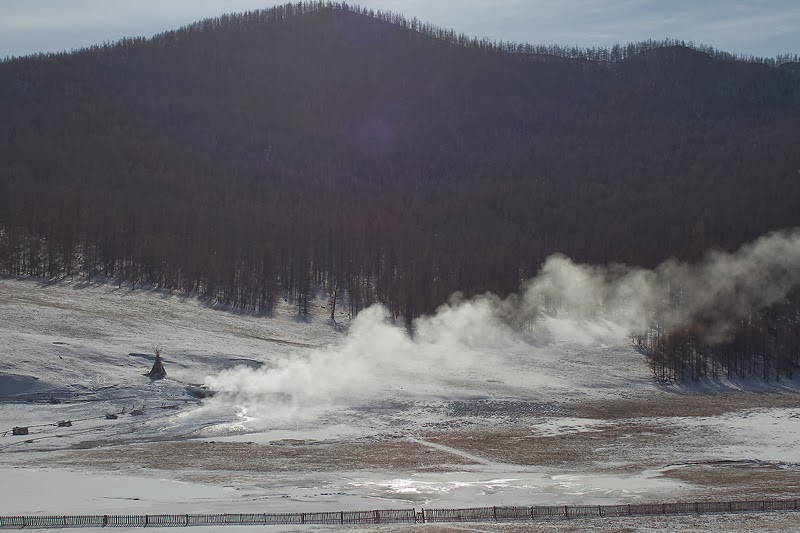 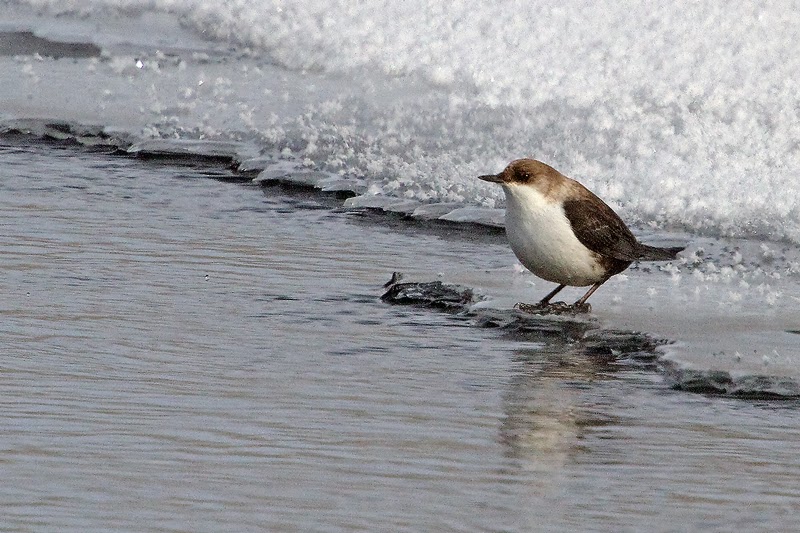 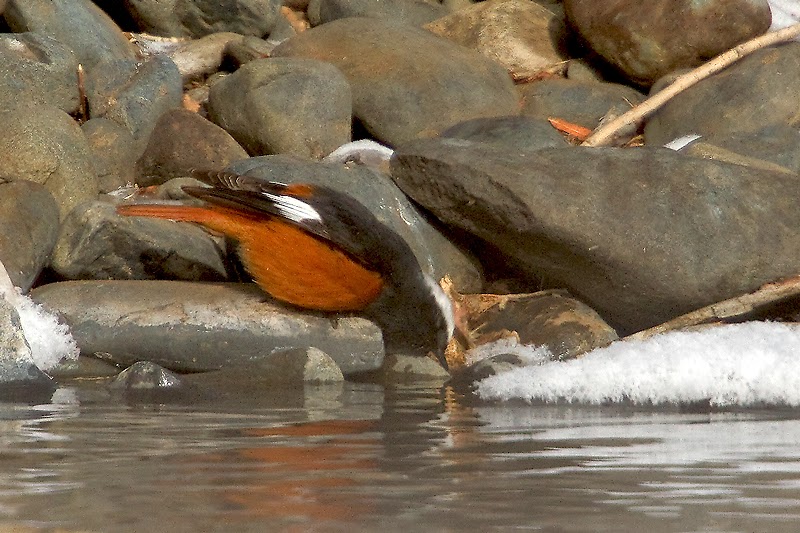 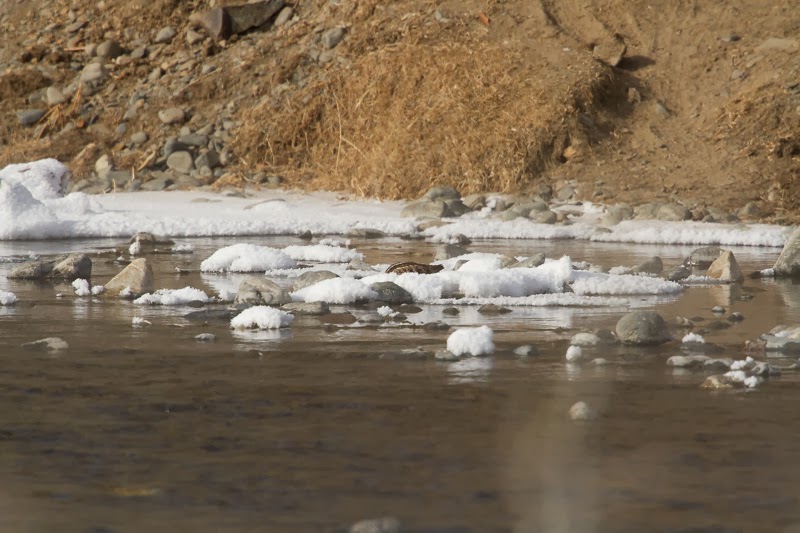 The rising steam from the open water, although not much, made it almost impossible to get good photographs of the snipe and the redstart. It was a shady stretch of the river as well, and it took me more than one hour to get what I wanted. Better pictures of the snipe will be posted separately next. Two happy guys returned to Tsetserleg that evening.

After a good and much needed rest we were out searching for our target species again the next morning, on 10 February. During the morning we passed Tsenkher village and an almost bird-free steppe until we reached Ogij village in the Orchon valley near Ogij Nuur.

On our drive along the eastern banks of the river we found lots of Upland Buzzards, just as we did before. We saw more than 40 Corsac Foxes that day and this, together with the presence of so many buzzards, was a good indicator for rodent abundance. Just before we entered Kharkhorin on our way to Erdenesant village we came across a Rough-legged Buzzard, the only one during the entire trip. 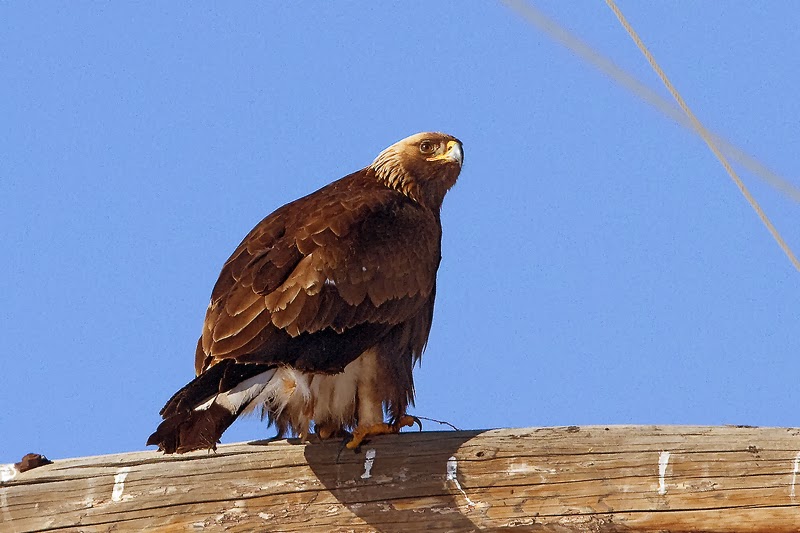 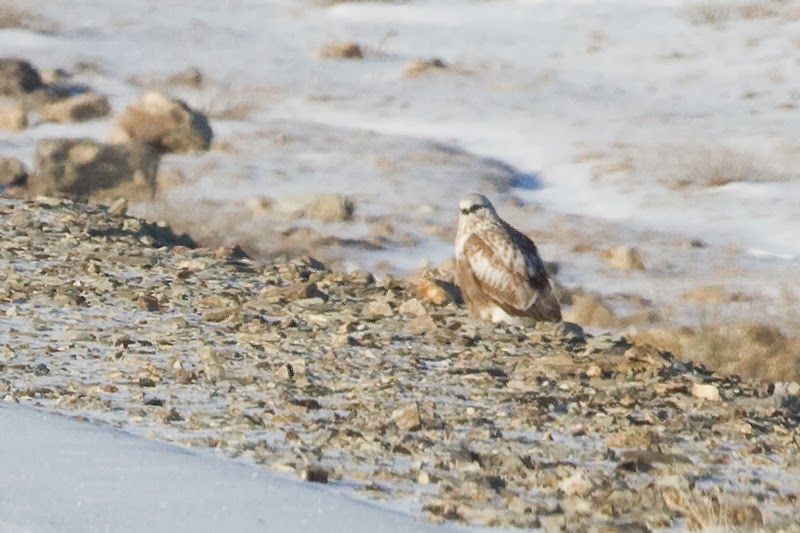 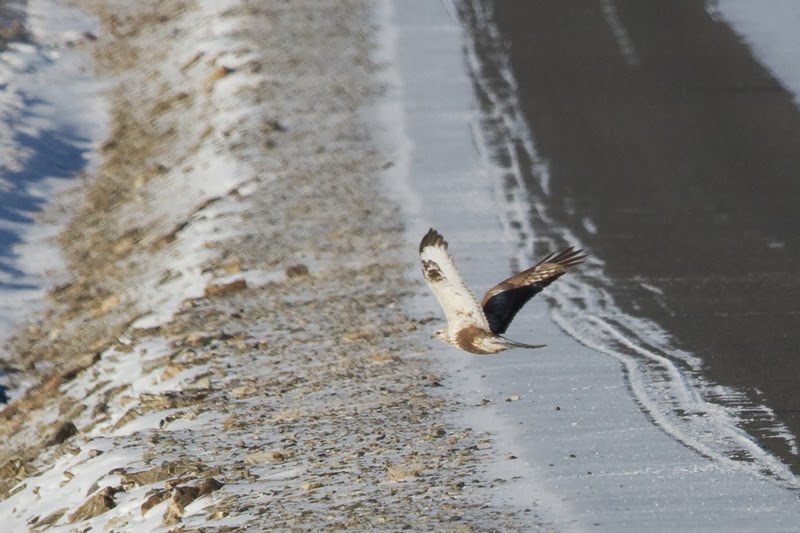 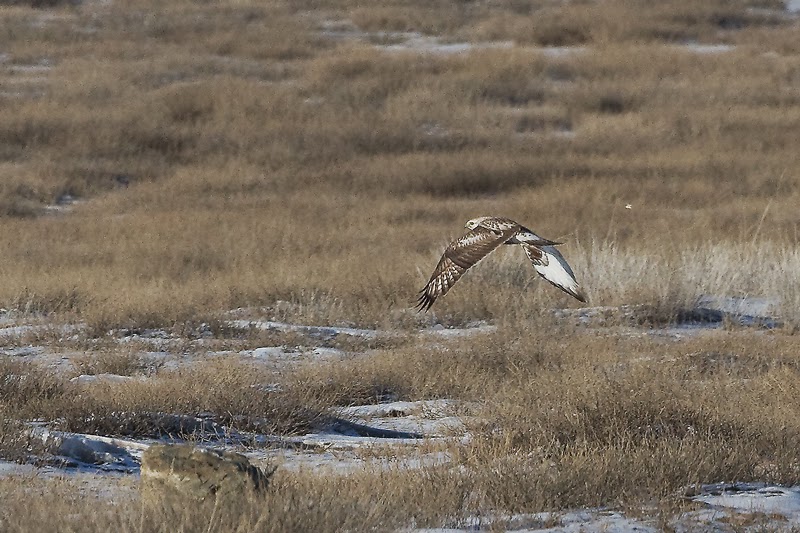 On 11 February we went to Erdenesant Mountain, but got stuck in the snow just before we reached the site. With the help of a shovel we finally made it and saw Brown Accentors, Daurian Partridges, Eurasian Black Vultures and about 200 Bohemian Waxwings. There were also a few Red-throated Thrushes around but it was impossible to get even near-acceptable shots. 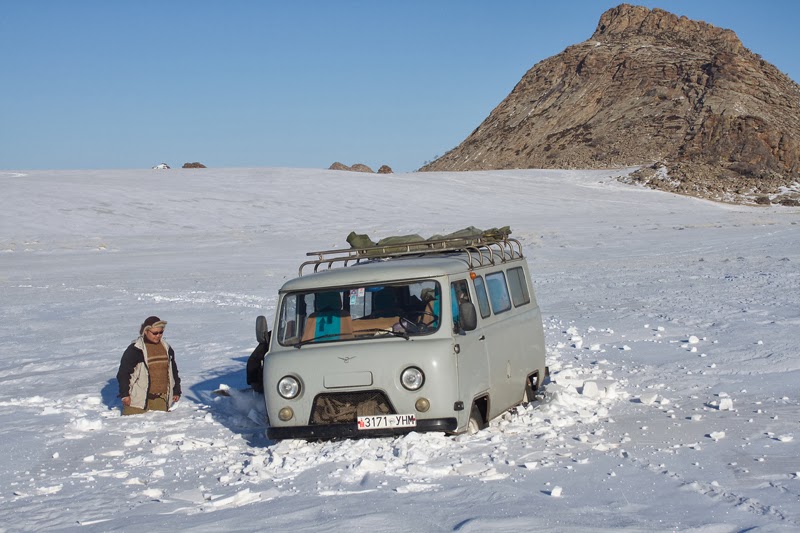 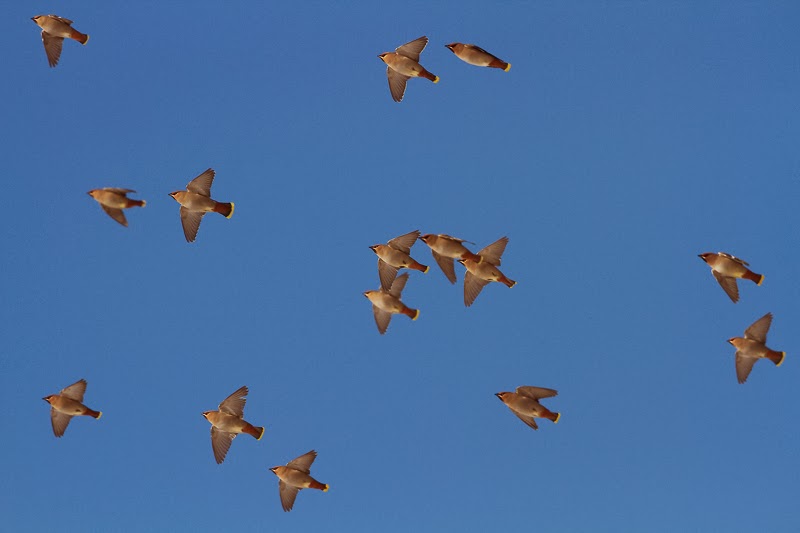 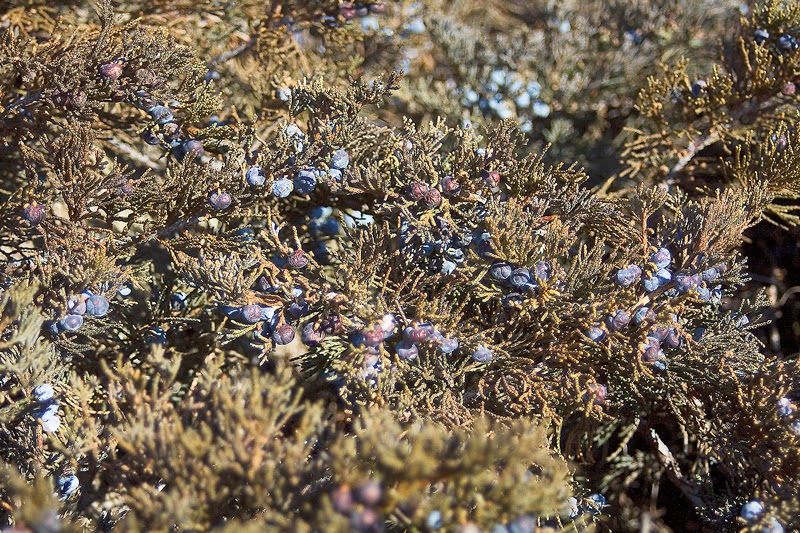 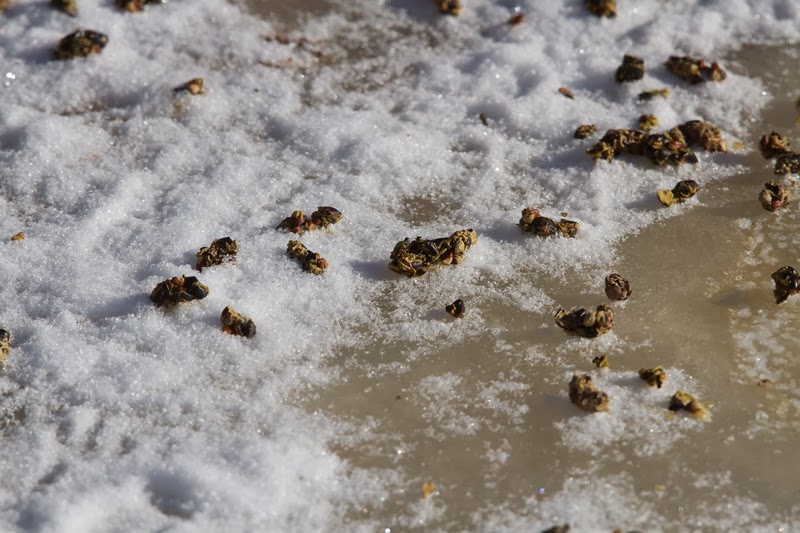 After lunch we went on to Dashinchilen Bayan Nuur aka Tsagaan Nuur. Not far from Erdenesant village we encountered a Bearded Vulture. One reason to check out the reeds of Bayan Nuur was a recent sighting of Bearded Tit from UB Ponds in December 2013. Although we scrutinized the reeds for almost two hours we could not find any Bearded Tit, only a single Azure Tit was around. Under the bridge we found a strangulated Barn Swallow. It is risky to use horse tail hair, apparently. At 16:00h we called it a day and went back to UB. 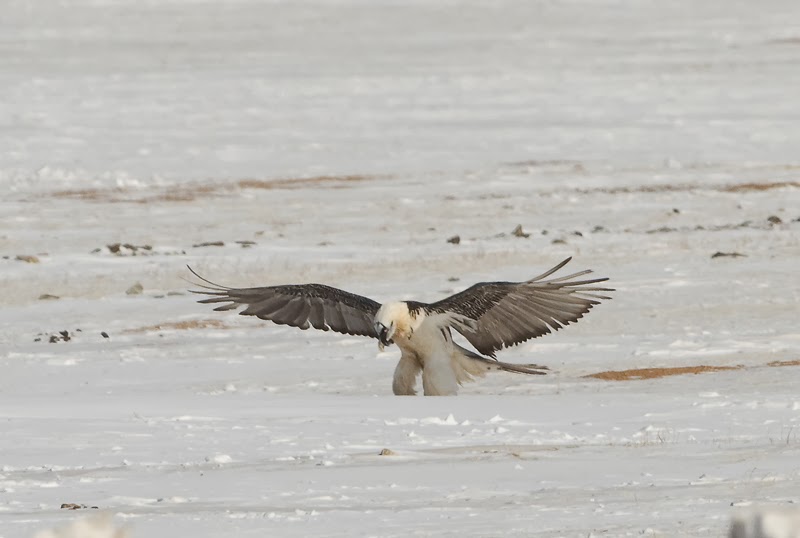 Common Goldeneye: one at Urd Tamir River
Goosander: two at Urd Tamir River
Bearded Vulture: few seen
Eurasian Black Vulture: up to nine, seen daily
Upland Buzzard: very common in the Orchon Valley, rare at all other sites, some pairs already attending nests, one pair was mating on a nest
Rough-legged Buzzard: a single near Kharkhorin was the only one
Golden Eagle: four seen
Common Kestrel: three seen
Merlin: seen daily, but never more than one per day
Saker: surprisingly few encountered, only one in the Orchon valley despite the mass abundance of rodents 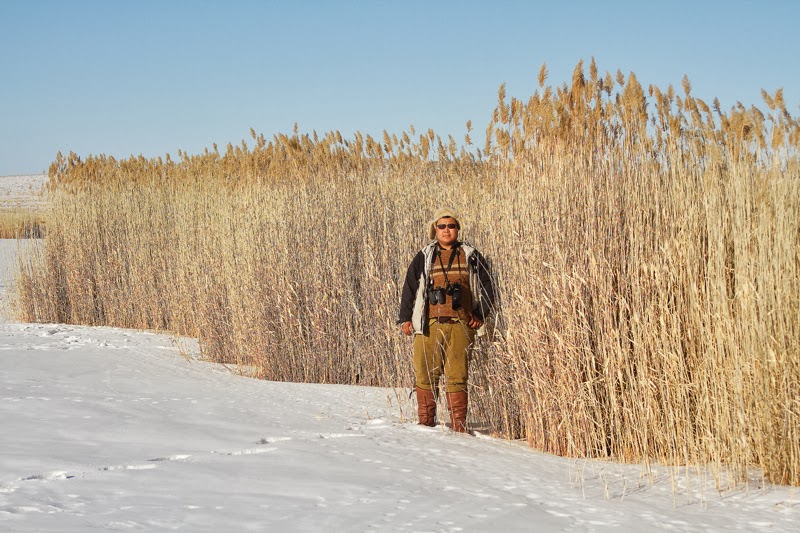 Amarkhuu and the mature reeds
at Bayan Nuur, Feb 2014 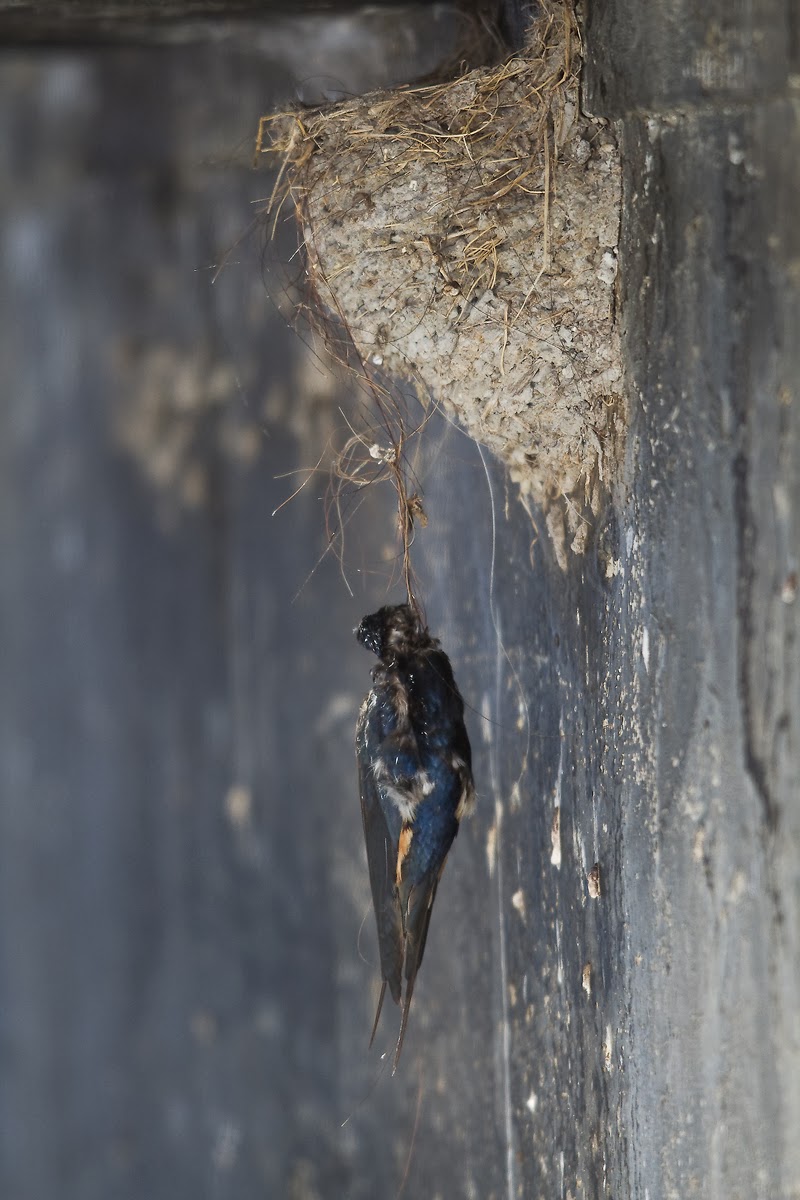 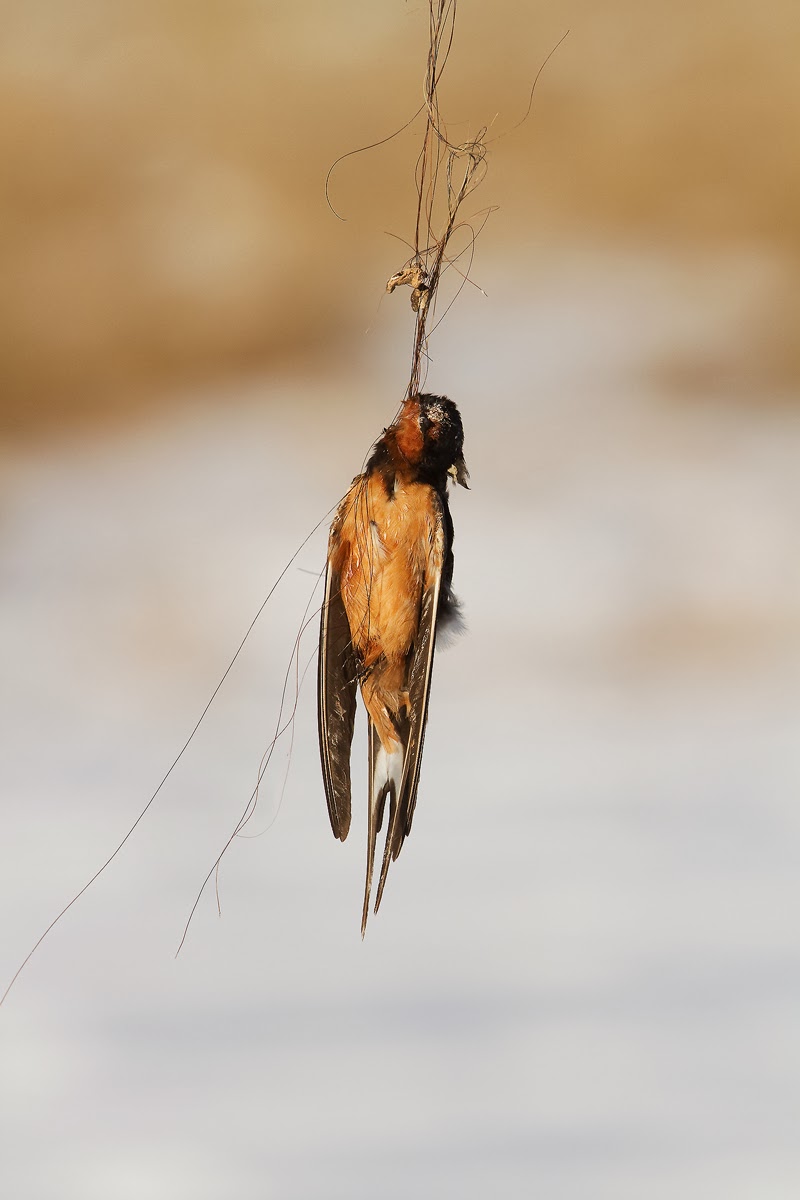 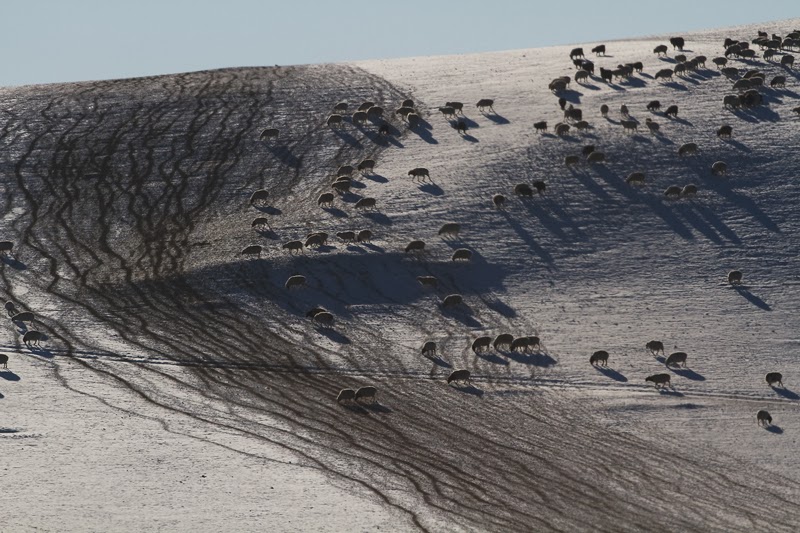