Gobi / Shinejinst update, 20 APR - 6 MAY - D. Mantle
The 20th of April was an exciting day for me. I saw my first Pallas’s Sandgrouse. I was actually a little surprised that it had taken me almost two months to see one but I guess they find slightly more hospitable areas during the winter. Our basin is very open to the cold westerly winds and has been snow covered as often as not till now. Today there was a really violent dust storm and it was as the winds were dying down that two Pallas’s Sandgrouse raced over the camp. The typical sandgrouse bubbling call was what alerted me to look up. Five minutes later the first Dark-throated Thrush of the spring (a first winter ruficollis) sought shelter behind some cabins. Small numbers of both ruficollis and atrogularis where seen until the end of the month (none so far in May). I have subsequently seen sandgrouse every few days in our valley and they were common in less grazed habitat an hour to the north. 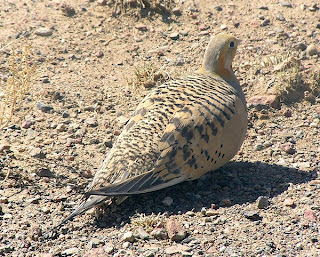 Further migrants included an unexpected Chaffinch which hung around for three days (21-24th April), Water Pipit (daily from the 21st), continued arrivals and breeding of the four local wheatears, Black Redstart (phoenicuroides - resident from the 28th April), Demoiselle Crane (9 circled north on the 1st May), the second Citrine Wagtail of the spring at the exact same water sump as the first (5th May) and finally my first Mongolian hirundines – Barn Swallow (3rd May) and Sand Martin (6th May). The 6th also provided a major highlight in the form of a fine Hodgsons (White-throated) Bushchat and two Ruddy Shelducks on a metre square patch of ice melt. 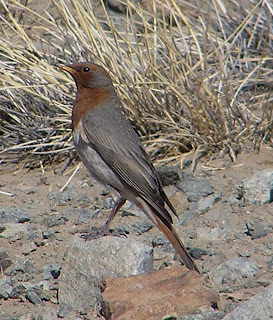 Red-throated Thrush. Photo © D. Mantle
Other recent area ticks included two Daurian Jackdaws that saw out yet another sand storm around camp on the 27th April and several Mongolian Finches.