http://www.worldmigratorybirdday.org, which see for more information)

Every year in spring and autumn, we can see and hear them: huge flocks of cranes, geese, storks and other migrating birds. Announced by their calls and the whirring of their wings, they appear in the sky, floating majestically and forming V-shapes. They are on a journey of several thousands of kilometres, facing numerous barriers: the hostile weather, the wideness of the seas, the red-hot desert or huge mountains. During the last decades, human-induced habitat destruction and degradation, artificial barriers such as wind farms and power lines pose further threats that contribute to the decline of many bird species.

To raise awareness, to highlight the need to protect migratory birds and their habitats, and to inspire people to take action, the African-Eurasian Migratory Waterbird Agreement (UNEP/AEWA) and the Convention on Migratory Species (UNEP/CMS ) started World Migratory Bird Day (WMBD) in 2006.

The first World Migratory Bird Day was launched on the weekend of 8-9 April 2006 with a festive outdoor event called ‘WINGS’, on the edge of the Great Rift Valley in Kenya. The artistic show was inspired by the phenomenon of bird migration and was hosted by Ms Kuki Gallmann , a famous writer and conservationist living in Kenya.

At the same time, dedicated individuals, national authorities and NGOs around the world organised public events like bird festivals, bird education programmes and bird watching excursions to help celebrate and support World Migratory Bird Day 2006. A total of 68 activities in over 46 countries were part of the celebration of WMBD 2006, stretching from Norway to Antarctica and India to Peru.

This year (2007), World Migratory Bird Day will try to focus world attention on the impact of climate change on migratory birds. Increasing temperatures, altered rainfall and vacillating weather conditions caused by climate change have various impacts on the nomads of the skies. The ecological character of the habitats of migratory birds is rapidly changing, which may lead to their decline. Moreover, climate change causes a displacement of migration pattern, egg laying and breeding. Some birds even stop migrating altogether.

There will be no central WMBD event this year. Instead we strongly encourage bird enthusiasts all around the world to celebrate World Migratory Bird Day through local bird educational activities. By joining us on 12-13 May 2007 you will help give migratory birds a voice! Show the world that you care about migratory birds in a changing climate! The AEWA and CMS Secretariats – the joint organisers of the global WMBD initiative - are looking forward to a successful WMBD 2007 with you!
______________________________

To celebrate the World Migratory Bird Day I organised a 2-day field trip to Ayrag Lake, a shallow wetland in the Great Lakes Basin in Uvs province, western Mongolia. Participants of the trip were one German language teacher and one biology teacher, and 10 biology students, all from Khovd State University. The activity was sponsored by the project "Support of HUN Club’s conservation and public awareness activities in western Mongolia" which is supported by WWF Hong Kong’s Asian Waterbird Conservation Fund (see below).

We met in front of the WWF Altai-Sayan Field Office (where I work as an International Adviser) in the morning of May, 12th. After a brief stop just outside of town, where we collected water for the trip from a holy spring, we continued north, towards Ayrag Lake. Just the first 35 (out of c.200) km of the way was surfaced road, the remaining part we had to drive off the beaten track. Road-signs are virtually absent in Mongolia, and we lost our way twice (and got stuck in sand once…). Asking for directions is difficult too; during the 200-km ride we met two other cars only... (Khovd province has a population density of 1.1 people/square kilometre!). However, we managed to reach the lake in early evening (after 8 hours of driving!) and pitched tens at the shore. After some birdwatching we prepared food at a campfire and went to our tents early. Most of our observations listed below were done between early morning and noon of May, 13th. Observations had to stop in the afternoon due to one of the all-to-common sand-and-dust storms. But we managed to see a good selection of species, although we covered only a small part of the wetland. Despite the continuing strong wind we were able to observe a Golden Eagle, a Long-eared Owl and an Osprey on the way back to Khovd. 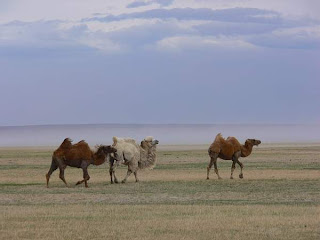 Huge flock of cormorants, gulls, and 3 pelicans -
(sorry, behind the dust storm which is visible behind the camels…)


This World Migratory Bird Day 2007-activity was sponsored by the

The Asian Waterbird Conservation Fund was established in July 2005 to provide financial support for projects at sites of importance for migratory waterbirds in the East Asian-Australasian Flyway. Cathay Pacific made an initial donation of HK$500,000 (approx. US$65,000) into the Fund. The Fund is administered by WWF Hong Kong. Further donations are being sought actively from other sources to increase the amount in the Fund, so that a greater number of worthwhile projects can be supported in future. Each year, up to 25% of the amount in the Fund will be earmarked for disbursement to support approved projects. At present, the maximum amount that can be applied for each project will not exceed US$4,000.

and by WWF Mongolia