I would be very grateful if anyone could help me with the following:

Booted Eagle Hieraaetus pennatus has occasionally been turning up in SE Asia as far south as Bali. Initially it appeared that these observations referred just to vagrants. Recent observations, however, by Robert Decandido and others in Thailand and Francesco Germi in Bali suggest from the numbers of Booted Eagles they have observed that although small their presence may not be as vagrants but as regular migrants. If so it begs the question where do they come from? It appears the most likely candidate is the breeding population identified in Ferguson-Lees & Christie (2001) located "separately from the Russian Altai eastward through Tuvinskaya and north Mongolia to western Lake Baikal, Transbaikalia and western Manchuria." However, I have been unable to locate any records of migrants of this species between the above breeding distribution and SE Asia. Similarly there appear to be no records from Japan or Taiwan (regular migration watch sites), very few if any records from southern China, none from Vietnam and Cambodia and very few from Laos. There are slightly more records from Burma and northern Thailand but that is the sum total until Chumphon in southern Thailand where Candido and others made their migration observations.

I would be grateful for anyone's thoughts on this question and any records of migrant or wintering Booted Eagles recorded between the above breeding range and South-east Asia and within South-east Asia. If anyone could also provide finer details of the breeding distribution in China, Mongolia and Russia that would be great.

In Thailand, Booted Eagle is a regular migrant and winter visitor in the country during winter months. Its range spreads from the north-west (Chiang Mai, confirmed with photographs) to the uppermost of southern Thailand (as south as Petchaburi province), particularly in suitable habitats, and that are harvested rice field and open agricultural fields. According to raptor surveys organized by Thai Raptor Group, the species has been sighted and confirmed (by photographs) to spend winter months in northwest, northeast, central and upper southern Thailand.

Certain individuals do migrate southward passing raptor watch sites in Chumphon and Radar Hill in Prachaub Khirikhun. The detail of the species' migration passing Radar Hill can be found here. October 2006 has been a fruitful year for the species passing through southern Thailand.

The ratio of the Booted Eagle's morphs found in 2006 in Thailand is 1 pale in 10 dark morph. This finding is based on 20 separate individuals throughout the country, both during winter and autumn migration surveys. If this holds true for the whole Eastern Palaearctic, it be quite different from the Western Palaearctic where the pale morph predominates, according to Forsman, 1999. 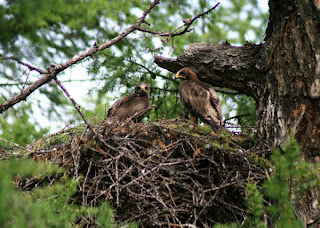 Booted Eagle is a regular passage migrant, recorded resting in irrigated poplar and willow plantations. No active migration (birds flying purposefully in one direction) could be registered. Last year it was seen on spring migration (more common) from April, 11th until May, 30th, and on autumn migration from September, 9th until September, 26th. Following colour morphs were recorded (n=56 birds; sum daily totals; so birds resting for several days were probably counted several times):

At Lake Baikal, Russia we have more part of the dark morph among migrants. Indeed, the dark morph is predominant. Data on morph ration in 2003: In total, 52 birds incl. 46 dark, 3 pale, and three intermediate (and no one rufous). So, c.1:10.

Im sorry Axel, there is a misprint again. Total bird number was 52.