I went – together with tour leader Christopher Leahy and a group from Mass Audubon (Massachusetts Audubon Society) for a two-day visit to Khar Us Nuur National Park. When we arrived at Khar Us Lake we met a family of local nomadic herders who were busy with the making of a new felt cover for their ger (Mongl. ger = yurt, the traditional felt tent of Central Asian nomads). The design of the yurts and the making of the materials have changed very little over the last centuries (though the very heavy package was dragged by a van after another layer of wool was added – it would have been to heavy for the single horse around).

The making of felt 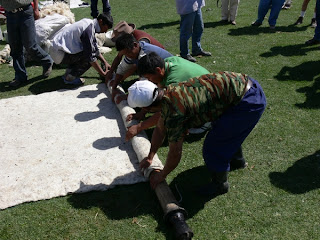 The width of felt is fixed to a wooden axle.
Photo © A. Braunlich 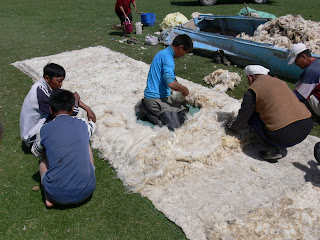 Another layer of raw wool is added.
Photo © A. Braunlich 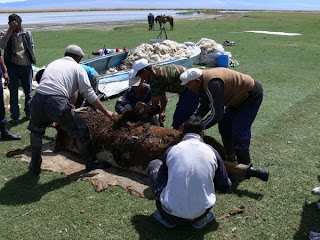 Cow hide is wrapped around the felt.
Photo © A. Braunlich 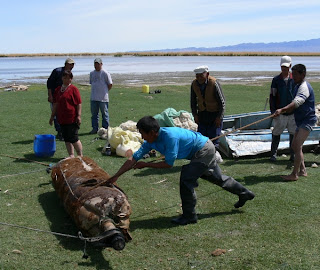 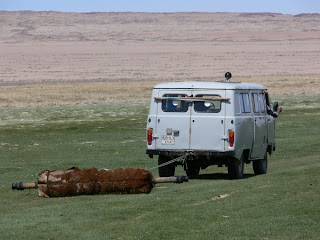 The package is dragged over the steppe.
Photos © A. Braunlich

Despite the century-old coexistence of nomads, their livestock and the natural environment, a recent increase in livestock numbers has resulted in ever-increasing pressure on Mongolia’s pasturelands, even inside protected areas. Overgrazing associated with livestock breeding practice exceeding rangeland carrying capacity degrades natural habitat, and is forcing wildlife to migrate further in search for better habitats, thus increasing risk of exposure to human-wildlife conflicts. To address the underlying causes WWF Mongolia is working to safeguard the Mongolian grasslands by improving the livelihoods of nomadic herders and supporting a more sustainable use of natural resources. For more information read about WWF’s program on Pasture management and rural development.

Here are some bird highlights (the final tally of the two-day trip was 101 species):
The low water level of Khar Us Lake resulted in quite a lot of muddy shoreline exposed – good habitat for waders. Apart from the common breeding species Northern Lapwing, Common Redshank, Kentish Plover, Little Ringed Plover, Marsh Sandpiper and Avocet, we found a good selection of migrant waders, including 35 Grey Plovers, 2 Little Stints, dozens of Temminck’s Stints, 1+14 Asian Dowitchers (probably breeding in the park), >40 Ruddy Turnstones and c.50 Greater Sand Plovers. Large numbers of White-winged and Common Terns were feeding in a nearby shallow lagoon. A small group of Eurasian Spoonbills and some Greater Cormorants rested in the mixed colony of Pallas's and Mongolian Gulls.

Waterfowl was present in good numbers, with many Greylag Geese having young by now. Globally threatened species observed include a few Swan Geese and over 30 White-headed Ducks.

Common breeding species encountered in the reed beds included Bluethroats (red-spotted), Great Reed Warblers, Paddyfield Warblers, and at the edge of the reeds Citrine Wagtails. The small belt of green pasture between the lake and the surrounding desert steppe provides habitat for Western Yellow Wagtails (of the white-headed spp. M. f. leucocephala), Eurasian Skylarks, Lesser Short-toed Larks, Masked Wagtails, and Richard’s Pipits. The desert-steppe between the meadows and the mountain are inhabited by Horned Larks, Desert, Isabelline and Northern Wheatears, Pallas’s Sandgrouse, and Isabelline Shrikes, all of which could be observed.

We stayed for a night in a yurt camp near the lake, run by a local herder’s community (supported by WWF) since a couple of years. Interestingly a pair of Barn Swallows was building a nest on a support beam inside a ger (without a chimney) – hopefully they’ll manage to raise their brood before the herders have to move up the mountain later the year, in order to escape the super abundant mosquitoes near the lake shore. 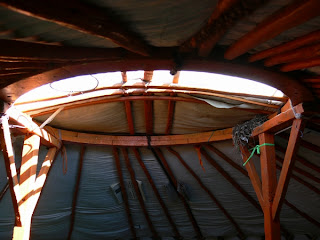 Barn Swallow nest inside a ger.
Photo © A. Braunlich 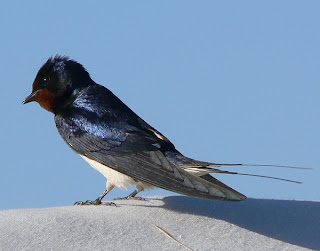 Barn Swallow on the ger above her nest.
Photo © A. Braunlich 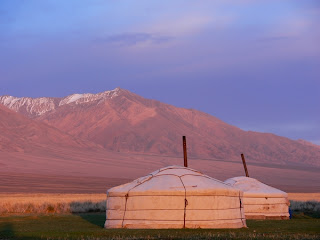 Yurts in Khar Us Nuur National Park. In the background
Jargalant Khajrkhan Mountain. Photo © A. Braunlich