The CD-MP3 Birdsounds of Northern Siberia has just been published. Several species featured on that CD occur as migrants in Mongolia or even breed. For a full species list and ordering information click here.

More information: Over a period of seven years, between 1995 and 2002, Cristoph Zöckler has visited some of the most remote places in the Palaearctic: Northern Siberia and took sound recordings of Arctic birds. Hardly any birdsound-recordings from Siberia have been made available to the public, this CD aims to illustrate the sounds of most species in Arctic Siberia. Many of the introduced species‘ vocalisations are only known from the non-breeding areas, while their song and breeding display are hardly known. 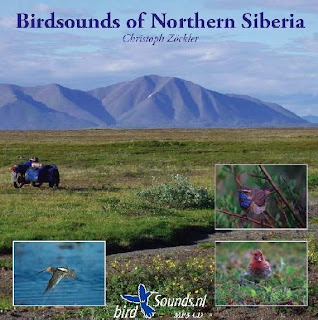 In total this CD covers 97 species, almost all typical species of the region in 196 different recordings, supplemented by four soundscapes of typical North Siberian landscapes. The prime habitats include typical and mountain tundra, coastal areas as well as the forest tundra and the northern taiga. A few recordings have been included from the more southern central taiga. Sound recordings contain predominantly the breeding display and alarm calls and sometimes the calls of chicks during the brood rearing period. For many, but not all species there are several different sound recordings capturing different regional types or other variations in the display songs and calls, as well as other calls from the breeding area. Display and alarm calls sometimes match or have elements of the calls we can hear on migration outside Siberia.

Siberia is still surrounded by a veil of mystery. The vast area is still little explored in terms of birds, yet home of rare waders and thrushes, vagrant warblers and the dazzling Siberian Rubythroat. The recordings were made from Taimyr (1995) in the West, Yakutia (1996-1999) to Chukotka (2000, 2002) in the East of Siberia. For many years the region was inaccessible and still today it creates huge logistic challenges to visit most of the areas. In the harsh Arctic environment the birds are only present from late May to early August and even then severe weather conditions often obstruct the recording.

“This was the true Siberian tundra, brilliant with flowers, swarming with mosquitoes, and full of birds.” • Henry Seebohm, The Birds of Siberia, 1884

(sorry for the error in his name)

Some my colleagues have noted it's a pity there is no sound of Charadrius mongolus at this CD, characteristic species in NE Asia.