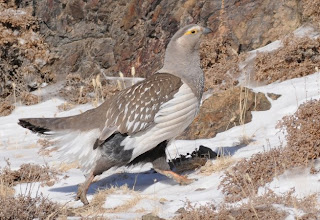 These remarkable photographs were taken by Tumendelger Humbaa in the Zuun saikhan mountains of Gobi Gurvan Saikhan National Park in Mongolia’s South Gobi Province on 23 December 2008. Tumen wrote to Birding Mongolia: “It was very cold and the mountain Takhilga is pretty high. This mountain is 2815 meter above see level. There were 15 Snowcocks altogether. I could approach 4 of them. My camera is a Nikon D-300 with a 300-mm lens.” 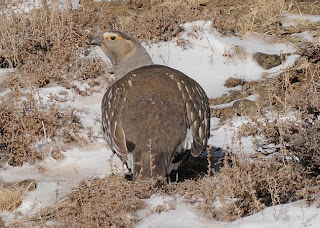 These are probably the best photographs of this species ever taken! Considering the circumstances (winter temperatures in Mongolia can drop well below minus 30 degrees Celsius in winter!) Tumen can only be congratulated for his superb photos!

The Altai Snowcock Tetraogallus altaicus has a rather limited global range. It breeds mainly in Russia in southern Siberia (mountains near Abakan, Sayan Mts, Tannu Ola Mts) and in Mongolia (Mongolian Altai, Gobi Altai, Khangai, mountains east of lake Khuvsgul). It is not globally threatened, but it has a rather small total population, estimated at 50,000 – 100,000 individuals.

Your blog keeps getting better and better! Your older articles are not as good as newer ones you have a lot more creativity and originality now keep it up!

Wonderful bird. I like those grouses. I never forget my time with them in the Caucasus in Georgia. :)
Nice images.