Black Drongos in Mongolia
During a birdwatching trip, organized by Hugues Dufourny in collaboration with the Mongolian Ornithological Society through Mongolia in May/June 2010 eight (!) Black Drongos Dicrurus macrocercus of the subspecies D. m. cathoecus were recorded in Mongolia’s South Gobi province. Here’s the story, by Hugues (translated from French; all photos © Patrick de Harenne):

Probably the biggest surprise of the trip! The discovery of a single Black Drongo upon our arrival at the oasis of Bayan Bergat in the evening of June, 6th was already amazing, but even more surprising were 7 Black Drongos in the wooded area of Dalanzadgad on June, 8th. 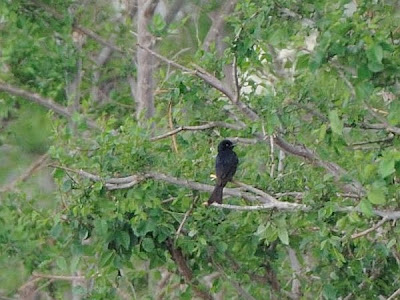 The total of 8 individuals is obviously very difficult to comment for a species that is considered extremely rare in Mongolia. The observations demonstrate the lack of observers in this country more than the actual scarcity of the species! 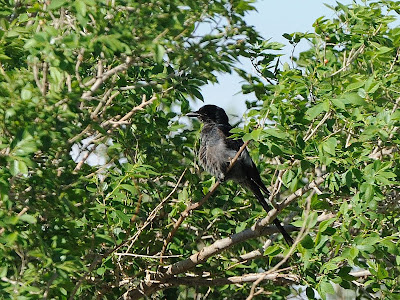 The first bird was extremely shy and mobile and it was a real challenge to get some photos, which was finally achieved by Amra and Patrick on the morning of June, 7th. The seven birds in Dalanzadgad were more cooperative until six of them very suddenly decide to leave the site, rising into the sky and flying east! A few minutes later two of them came back, probably stopped in their migration by dark clouds on the horizon. Finally, a single bird, less adventurous than the others, posed obligingly and remained prominently visible for our enjoyment, so that Patrick was able to make good shots. 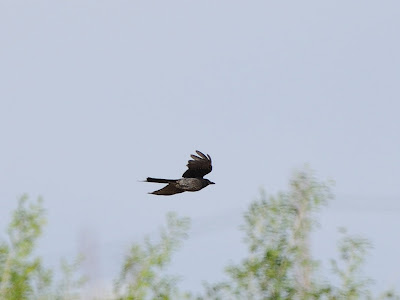 All individuals were seen well enough to appreciate that they were in first summer plumage. They showed a black breast and belly but a dark grey under tail. The white dot at the corners of the beak, the diagnostic criteria of Black Drongo was detected during the best observations. 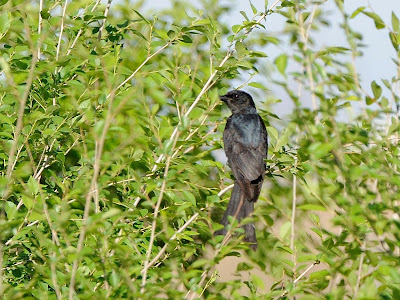 Comment by Axel:
Certainly a most exciting observation! Mongolia’s first Black Drongos (one adult and one immature) were seen in the Juulchin Gobi tourist camp 1 near the town of Dalanzadgad on 14 June 2000, a day after a fierce storm blowing from the south-east (observers Alfred Hovorka, Hans-Georg Folz, Dashnamjiliyn Batdelger, Werner Rathmayer). After that, an unidentified drongo was seen, again at the Juulchin camp, on 13 June 2007 by James Lidster and a Sunbird tour group.

Northern populations of Black Drongo (breeding to northern China and the southern Russian Far East) are migratory, and all these observations probably refer to the phenomenon called “spring overshoot”, which means that spring migrants are flying past their destinations, turning up further north than intended.