A trip to the west and back via the northern route 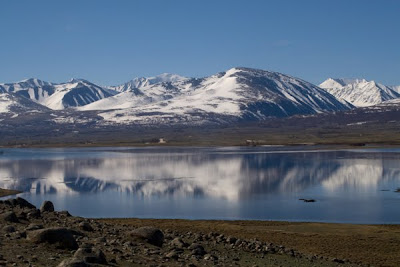 Altai Mountains in May 2010. A. Buchheim

Part 2 (for part 1 click here)
The morning of May, 20th brought us a gale-force storm at Khyargas Nuur and besides observing the local birds like Desert Warbler, Desert Wheatear and a few Pallas’s Sandgrouse we could not check again for wing-tagged gulls. So we left earlier than planned for Olgij Nuur where we just counted the gulls. Only on the small island there were breeding Mongolian Gulls (220 nests) while the fallen water-level had turned the larger island into a peninsular, hence no gulls were breeding there anymore. West of Khovd village (not to be confused with Khovd town) we saw a Henderson’s Ground-Jay, and finally we camped near the Khovd Gol (gol = river). Apparently the storm had driven birds down from the hills or migration had stopped because many birds were seeking shelter in the half-destroyed riparian forest along the shores of the river. Among others we saw a Booted Warbler and three Willow Warblers and a flock of 30 Masked Wagtails Motacilla (alba) personata. 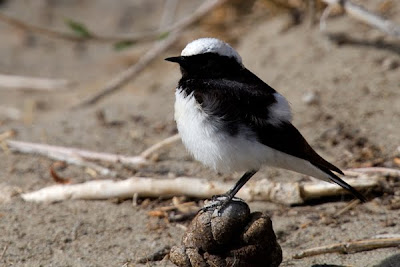 Another day (21st) – still the same storm, but now even blowing harder, and we drove against the sand just to see a Ground-Jay again but almost nothing else. Before we found shelter at the village of Ulaan Khus a roosting Red-throated Pipit made us smile a bit.

On May, 22nd the storm was over and our minibus carried us along the Khovd Gol all the way west into Altai Tavan Bogd National Park in the Mongolian Altai Mountains. 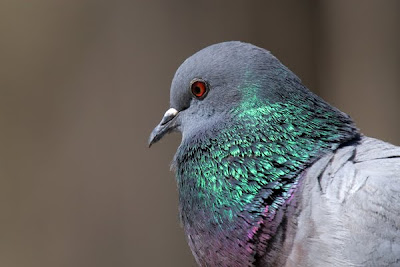 Hill Pigeon, cooing on the bridge at the entrance to
Altain Tavan Bogd NP, May 2010. A. Buchheim

During our lunch break we had some time for bird watching: singing Sulphur-bellied Warblers and Brown Accentor gave a mountaineer-feeling as did the sole Golden Eagle. At the river there were Great Cormorants and Goosanders foraging. At Khoton Nuur (still frozen) we did our “job” and counted the gulls in the colonies (350 nests on 4 islands, some other islands not occupied by gulls) but also we added other birds to the day-list. Here – in the forests – Western Jackdaw is a common breeder and gives an almost European feel, but here it is accompanied by the eastern form of Rook Corvus frugilegus pastinator. A dark morph buzzard illustrated that their ID is very complicated in the Altai as both Upland and Long-legged Buzzards and their hybrids occur. As we did not see whether the tarsi of the bird we saw were partly feathered (Upland) or totally unfeathered (Long-legged) we could not identify it. After several crossings of rivers with a lot of ice we eventually got stuck in the forest at Khorgon Nuur. So we pitched our tents at the spot for four nights. The slope was very wet and as soon as nightfall set, many Pin-tailed Snipes started their breathtaking display-flights with the strange but unmistakable sound.

Sunday morning (23rd) we explored the forest and adjacent areas. A flock of ca. 200 Plain Mountain Finches was feeding between the larches, Black-throated Thrushes were singing, and the pale Altai Twites (of the subspecies Carduelis flavirostris altaica) were busy in building their nests. 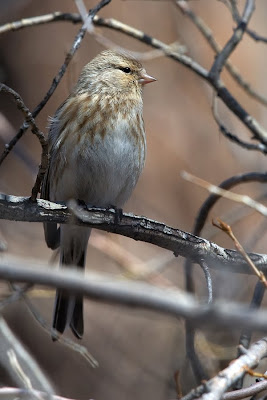 The forest was much degraded just as if it wasn’t in a National Park. Willow bushes in the wetter areas held several Bluethroats and migrant leaf warblers but in parts the willows had been grazed down to a height of a few centimetres. Big trees had been cut and even the National Park people were collecting firewood – thus it seems that the only difference between a Mongolian NP and the unprotected regions surrounding the park is that foreigners must pay an entrance fee. Also we saw some people gold panning.

The next day started with a first for Mongolia: Red-backed Shrike Lanius collurio, a first summer female. It is not easy to identify them here in a zone where they are recorded to hybridize with either Brown or Isabelline Shrikes (hybrids had been recorded in Mongolia before) but the wing formula of our bird was clearly in favour of Red-backed as well as the general coloration and the tail-shape (more details will be posted later at this site!). Groups of Ortolan Bunting and Common Rosefinch were waiting for better weather conditions. We also saw one of the smaller forms of Lesser Whitethroat. 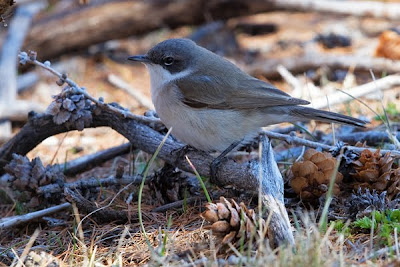 Lesser Whitethroat (ssp?). Still much research has to be done to clarify which forms of this Sylvia species (complex) occur in which part of Mongolia, Altai Tavan Bogd NP, May 2010. A. Buchheim

Quite far to the west and thus well in the range of personata was a White Wagtail of the taxon ocularis which we picked from a flock of migrant Masked Wagtails.

Oriental Cuckoo arrived on May, 25th, as had an Arctic Warbler. With a lot of white in its wings the Great Grey Shrike near the camp was identified as belonging to the taxon Lanius excubitor leucopterus. Otherwise the day was boring.

On May, 26th we left the “paper-national park” and met up with a Great Cormorant which was carried by a Golden Eagle on the shores of Khovd Gol. 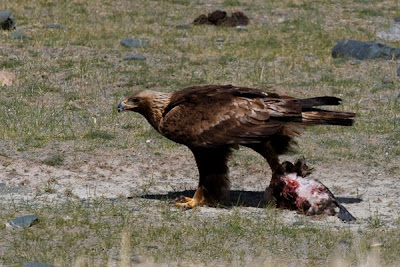 In Tsengel village a female-type Golden Oriole quickly disappeared in a tree not to be seen again. Back in Ulaan Khus village where we had lunch a group of three Griffon Vultures was joined by a Black Stork and a first summer Eastern Imperial Eagle making it an interesting mixed species flock. In the evening we arrived at Tolbo Nuur where we pitched our tents.