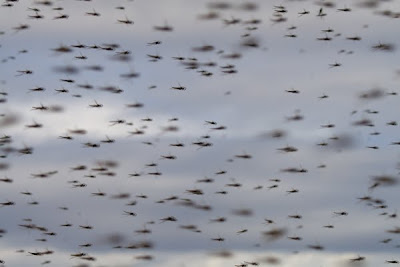 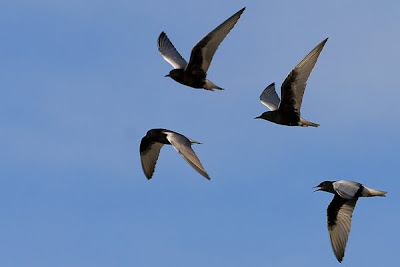 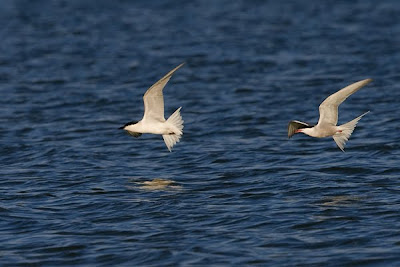 Gull-billed Tern & Common Tern, Oigon Nuur, June 2010.
It rained all night from June, 2nd to June, 3rd and we left Oigon Nuur after having been unnerved by its flies and after having checked the small lake again. Then we drove via Tosontsengel to our campsite at Ider Gol but this time we erected our tents on the southern shore of the river. Soon after our arrival we saw an adult Bearded Vulture flying around but the only nest we could find on the mountain was occupied by Black Vulture and contained an almost fledged young. The continued presence of an adult Bearded Vulture makes breeding in this area likely. Several Ortolan Bunting, Blyth’s Pipit, Common Redstart and Pine Bunting were singing as was a grey morph Eurasian Scops Owl. 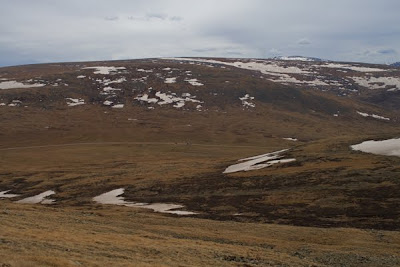 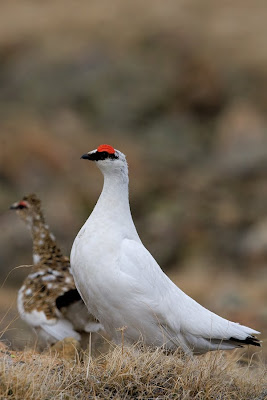 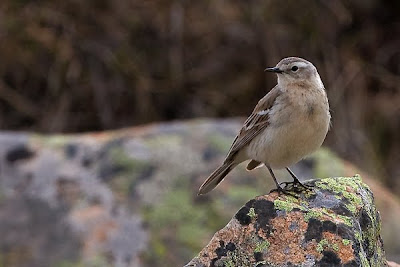 Water Pipit (blakistoni), Solongt Pass, June 2010.
On 4th our main target was Hodgson’s Bushchat and we spread out over the mountain tops at Solongt Pass for strenuous 4 hours in search for it, but in vain. Instead we logged 15 territories of Water Pipit (blakistoni), 2 territories of Eastern Stonechat, 1 territory of Altai Accentor, only two pairs of Shore Lark (brandti), 2 pairs of Willow Grouse and also 2 pairs of Rock Ptarmigan. A single Golden Eagle, a dark morph (what else?) Booted Eagle, 2 Black-eared Kite and a Common Kestrel were the only other birds seen. 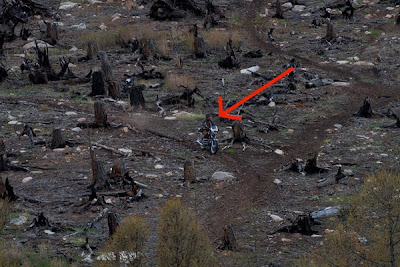 Logging burnt forest below Solongt Pass. The arrow indicates the wood-cutter on his motorbike pulling down one log, Tarvagatai nuuru National Park, 4 June 2010.
200 m below and south of the pass we camped. The forest here burnt down 5 years ago and now people were allowed to log the dead trunks with the aid of chainsaw and motorbike despite all is protected in this national park. By doing so they shortmindedly change the micro-climate to a dryer one, take out the main nutrition source for the next generation of trees and draw erosion-tracks onto the slopes.

The next stop (on 5th) was in the forest south of Terchin Tsagaan Nuur which looked quite promising from a distance but actually was a bit disappointing because it was heavily grazed and a lot of timber had been cut. Of course this area is part of yet another Mongolian national park! Most noteworthy were several Pallas’s Rosefinch and a female Ural Owl which flew close over our heads after sunset. The male was not as brave though it called repeatedly but remained unseen. 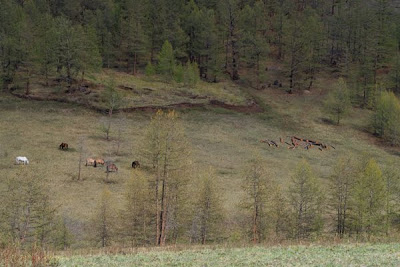 Two main reasons for degraded forests and shrinking forest-coverage in Mongolia: grazing (here by horses) and freshly cut firewood/timber in Khorgo Terkhiin Tsagaan Nuur NP, 5 June 2010.
We drove to the valley above Tsetserleg again and stayed there from 6th to 8th. Not long after our arrival it started to rain. During the first night the rain turned into snow and it snowed all day on 7th leaving us laying in our tents and sleeping like Polar Bears. Certainly this kind of heavy snowfall had a great impact on the breeding passerines: Hume’s Leaf Warbler, Rufous-tailed Rock Thrush and Pied Wheatear left the upper valley and gave up their clutches. After the snow had stopped falling we measured 21 cm of snow-cover and we were happy to leave this cold and wet place on 8th. 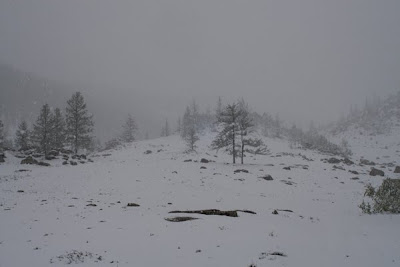 Snow in the rocky valley above Tsetserleg, 7 June 2010. 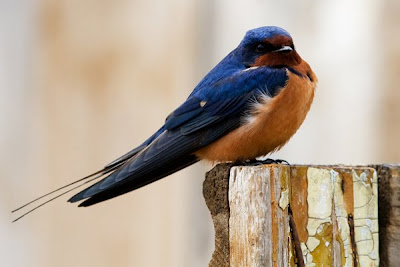 Barn Swallow, male tytleri, Ogij Sum, June 2010.
En route to Bayan Nuur we checked several nests of Upland Buzzard on 8th. None contained more than 3 nestlings and they were about 3 weeks behind their schedule (thus still very small). At Bayan Nuur 4 Red-necked Phalaropes were spinning while about 10 pairs of Black-winged Stilt were breeding. A single Ruff plus a male eastern Black-tailed Godwit (melanuroides) were found in the wet meadow. This is probably one of the very few sites in Mongolia where the water level had risen during the last years and the formerly white lake (see part one) had become a blue lake as it was filled by water. 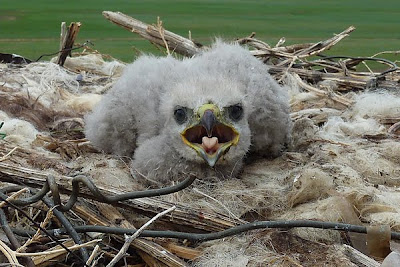 Upland Buzzard, the lonely chick. Bulgan Aimag, June 2010. © T. Zegula
Despite the above written the gull colony which had more than 1000 pairs at the beginning of the century had almost completely been abandoned and we counted a mere 15 breeding pairs of Mongolian Gull on June, 9th. Bird of the day was a Grey-headed Lapwing (quite far to the west) and second best bird was a first summer Brown-headed Gull (quite far north) both of which we saw well. Other goodies were a drake Falcated Duck, an Eastern Spot-billed Duck and a neck-banded Bar-headed Goose. There were about 48 of the latter species plus two family-parties which 6 and 4 goslings respectively. In the evening 3 first summer Black Stork arrived. 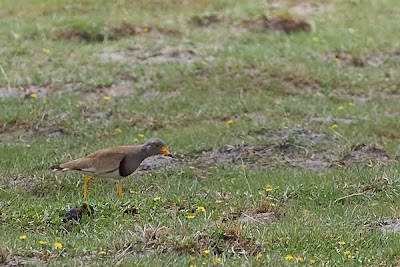 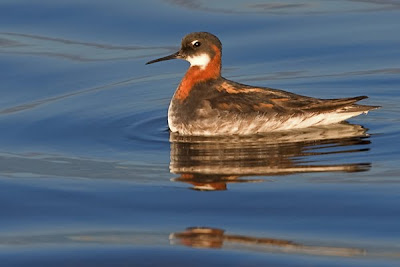 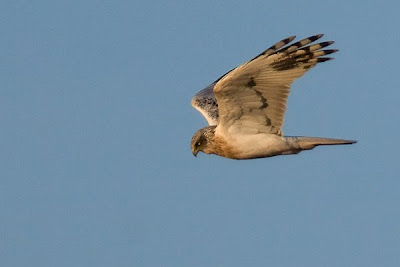 Eastern Marsh Harrier, a rather pale male with typically barred primaries.
There are 4 pairs of these harriers at the lake and one very contrasting male can be confused (and was!) with Pied Harrier, so be careful. Daschinschiling Bayan Nuur, June, 8th 2010. 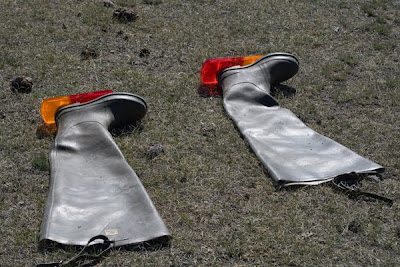 These strange waders in our camp remained unidentified
(tentatively we called them either back-lite or blinking waders, though).
On 10th we realized that there were 2 pairs of White-naped Crane this year but only one was breeding. The Asian Short-toed Lark were also about three weeks later this year. Instead of freshly fledged young we recorded that egg-laying had just started (or they had complete lost their first clutch and were producing a second one). Under the bridge 5 occupied nests of red-bellied Barn Swallow (tytleri) were found and we also had some Pallas’s Grasshopper Warbler but nothing else.

We arrived back at our flat in Ulaanbaatar on 11th without having noted any other interesting bird that day. 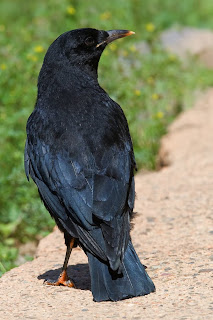 Freshly fledged Red-billed Chough, Lun Khot, June 2010.
On 12th we flew back to Europe with a tally of 238 birds seen. This is quite OK but we dipped on several of the commoner species, such as Daurian Partridge, both quails, Oriental Turtle Dove (both subspecies had been possible on range), Crested Honey Buzzard, Japanese Sparrowhawk, Amur Falcon, Broad-billed Sandpiper, Little Gull, Eurasian Eagle Owl, Black, Three-toed and Grey-headed Woodpecker, Alpine Accentor and even Azure Tit, just to mention a few. Nevertheless the trip was great despite the sometimes horrible weather! 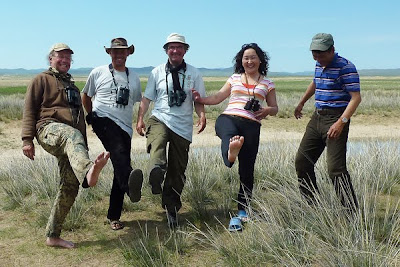 Great report! I did most of your itinary this summer in august coming from Olgii towards UB, but I'm affraid i didn't see as many great species as you guys. You're very right questioning the general lack of management of the environment in MGL. I've been birdwatching MGL the past six years and frankly the quality of many habitats has dropped seriously during this short period. Still we must hope that things will change for the good in years to come...

Dear Rik,
It would be nicde to get into contact. Please e-mail me using the contact/e-mail Birding Mongolia button on the sidebar of my blog.
Many greetings,
Axel