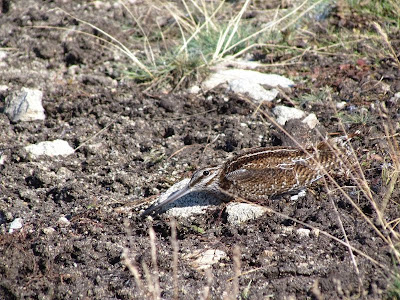 Recently I received a very good photograph of a Solitary Snipe, taken in the Khangai Mountains of Mongolia. The photographer, Els Harinck, wrote:

Naiman Nuur lies in the Hangayn (Hangai) mountains. The snipe was photographed Sept 16th, 2011 in the valley, out of the Naiman Nuur, between Shiireet Davaa and Uyanga. The early snow of the days before started smelting, little streams started to flow between icy banks. And there it was, secretly flown from somewhere and landed behind my back. Due to a miracle I noticed and was close enough to photograph it. During my three-year stay in western Mongolia I recorded Solitary Snipe three times only:

2) One resting behind the stadium in Khovd on 14 September 2006. About this second bird: I was on a late afternoon walk through one of the plantations at the edge of Khovd town when I noticed some movement in the high grass. I saw a bird walking away from me and managed to take one photo before it disappeared in the dense vegetation. I was only able to tell that it was a snipe, but which one? Then came the owner of the plantation (who had generously granted me permission to enter his land), and I was distracted. After a chat it was becoming too dark to continue birding. When I checked the (very poor) photo at home I was very surprised to find out that the bird in the plantation was a Solitary Snipe, the third species of snipe I had seen at this site (Common and Swinhoe’s Snipe seen before; and later Pintail Snipe and Eurasian Woodcock found there, too). 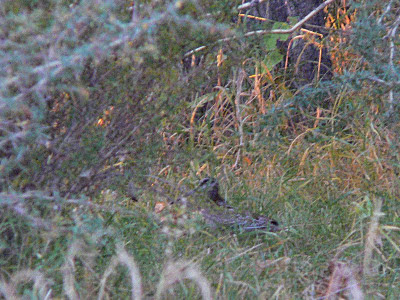 3) One flushed from a vegetation-free gravel spit (quite unusual habitat for the species) at Airag nuur on13 May 2007.

“The breeding distribution of Solitary Snipe is still insufficiently known. The core area is situated in the high-altitude mountains [breeding sites at 1350–2600 m] of southern Siberia and runs from the Russian Altai to the Sayan chains, to Lake Baikal and to Sochondo Mt. in the Chita area of Buryatia. ... In Mongolia, where breeding of the Solitary Snipe was recorded only once on Munku-Sardyk in the eastern Sayans [N of Lake Khövsgöl], further breeding localities are to be supposed in the Tarbagatai, Khangai and Khentei Mts. ... most of the birds are believed to migrate to distant winter quarters. Individuals from the western populations (G. s. solitaria) fly ... southwards into Mongolia and to W China ... The birds roost and hibernate singly (thus the name) or in small groups of two to three individuals at small, not freezing water courses (often these are hot springs) in the foothills as well as in protected high-altitude valleys...”

The Russian ornithologist Kozlova (1932–1933. The Birds of South-West Transbaikalia, Northern Mongolia and Central Gobi. Ibis 13) wrote “In winter (from September up to the middle of May) it is very common in the Tola [Tuul] River valley, keeping to places with open water.”

This is today probably not the case any more, since the species hasn’t been seen on several winter trips (see for example here) to open areas of the Tuul gol in recent winters.