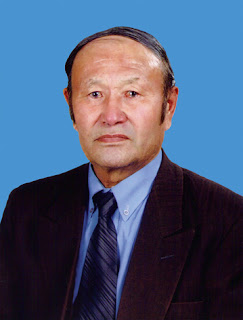 We are deeply saddened to announce that Professor Damdin Sumiya passed away due to apoplexy on 27 April, 2012 at the age of 72. He was one of the most respected ornithologists, biologists, teachers, sport men, and educators in Mongolia. The Mongolian scientific community has lost one of its greatest members who was also one of the pioneering ornithologists in the country.


Sumiya was born in Damdin’s family at Tumen soum of Gobi-Altai province in 1941 and spent his childhood with his parents. He graduated from Primary and Secondary Schools at Altai City in 1956 and Teachers College at Ulaanbaatar city in 1960. He worked as a teacher at the Secondary School at Bayangobi and Galuut Soums of Bayankhongor province in 1690-1964. From 1964 to 1967, he was an elementary class teacher and headmaster at the Secondary School of the Bayankhongor City. In 1967-1972, he studied at the National University of Mongolia and graduated from the University having specialized in Biology Teaching and Zoology. Since that time, he has offered his services at the University as Lecturer, Head of Zoology Department, and Consulting Professor over the last 40 years.


Professor D.Sumiya worked extensively in joint expeditions on Natural Condition and Biological Resources of Khuvsgul Lake and Selenge River Basin, and a re-introduction programme of River Beaver in Western Mongolia together with scientists from Russia, Germany, and Czech.


Professor D.Sumiya is the author of many books and monographs such as “Birds of Khuvsgul”, “Natural Condition and Biological Resources of Khuvsgul Lake”, “Dictionary of the Mongolian Vertebrates”, “Khuvsgul Lake Atlas”, “Guide Book to Mongolian Birds and Mammals”, “Biology”, “Microevolution”, “Mongolian Red Book”, and “Mongolian Red List of Birds” and wrote more than 150 scientific papers and edited more than 10 books.


He had been successfully working on Research and Conservation of Steppe Raptors, particularly Saker Falcon, as the national team leader from 1998 to 2006. Professor D.Sumiya co-founded the Mongolian Ornithological Society with his students and had worked as the Director of the Society until 2009. He supervised many under graduate, post-graduate, and doctorate academic works at the University.


The Mongolian Government decorated him with several high ranking medals and honours, such as the National Medal of North Star, Honour Certificate of Mongolian Government (twice), 60 and 70 years Anniversary Medals of the People’s Revolution of Mongolia, Medal of Teachers Honour, and Medal and Honour of Best Employee of Education and Nature and Environment.


He had actively and efficiently worked for his country and spent his life organizing educational activities and scientific works to train biologists, particularly ornithologists of many generations, to improve educational materials and facilities, to develop public physical training, to write educational and scientific books, and to investigate fauna of the country over many years. Professor D. Sumiya was truly a talented organizer, great educator, respected sportsman, and famous scientist.


Professor D. Sumiya was one of the most sincere and friendly men in the scientific community, both a father to his family, and respected teacher among his many students. All the staff of the National University of Mongolia, all members of the Mongolian Ornithological Society, friends and numerous students will forever remember his deep knowledge of science, his talent in education, and honest and humble character in our hearts.


This obituary was first published on the MOS website, and is repeated here with kind permission.

It was a much pity to get know that Prof. Sumiya has passed away. My former chief has worked with him at Lake Khubsugul.