Terry Townshend is a British birder and conservationist who has been living and working in Beijing since August 2010. See his great blog Birding Beijing. His article about the ongoing Oriental Stork poisoning incident at Beidagang Reservoir, Tianjin (just 30 minutes from Beijing by train) and how it could mark a turning point in China, is now online at Birding Frontiers: click here. 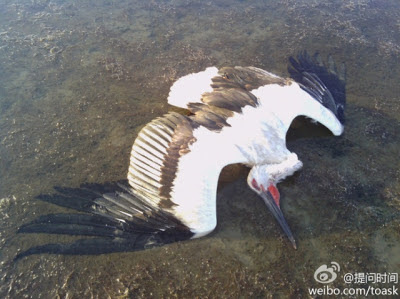 Tragic: An globally Endangered Oriental Stork poisoned by poachers at Beidagang. The population of these majestic birds is estimated to be fewer than 2,500 individuals.

In addition, there’s a podcast where he’s talking with Charlie Moores of Talking Naturally about his involvement in a campaign to draw attention to the widespread use of illegal mist nets in China (millions of birds are estimated to be caught every year) and the campaign being led by Chinese activists to stamp out their use: click here.

Read more here, and please leave a message of support for the wonderful work of the many volunteers involved. Thanks!: click