Birding the Khentii Aimag in winter 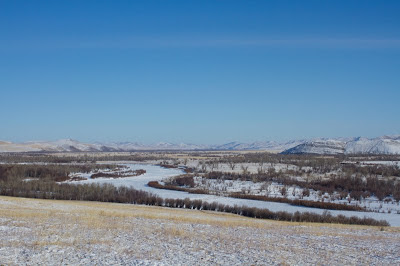 Winter birding in Mongolia’s countryside requires special care as it s gets freezing cold during the night. Early planning will help to overcome the different obstacles. Thus the guys of the Mongolian Birdwatching Club, namely Huyagaa, Amarkhuu and Tuvshin and I had met already in October for a thorough planning. 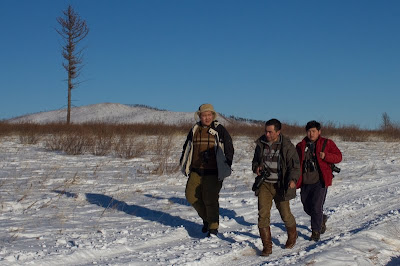 From 23 to 26 January we were out in the Khentii Aimag (Khentii province) in northern Mongolia, a region characterized by forests and large areas of steppe. During the trip night temperatures dropped down to minus 36°C (–32.8°F), but day temperatures reached “cozy” minus 15°C (5.0°F), with no wind and mostly blue skies. 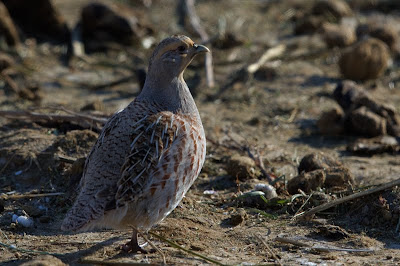 We started early on 23rd and were already 100 km east of the capital by sunrise to reach Binder village at 5 p.m. after having passed the villages of Jargaltkhaan, Ömnödelger and Bayan Ovoo. The next day we spent some time along the frozen Onon River and arrived at the village of Dadal in the evening to stay there for two nights. On 25 January our local guide Bender showed us around within Onon-Balj National Park. Most of the time we walked through the riparian forest of the Balj River in our fruitless search for waxwings. We returned to UB via the very same route. 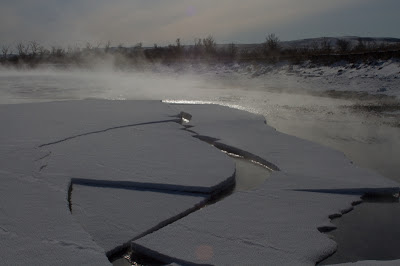 Open stretch of the Onon River in the morning, Khentii, Jan 2013 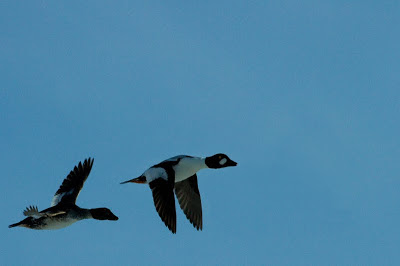 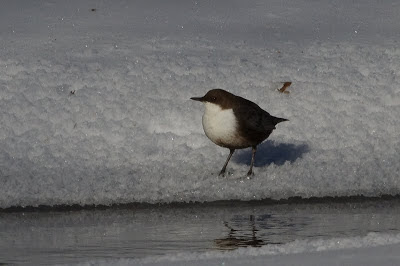 During our days in the field we did not see a single our most sought-after species, i.e. Snowy Owl, Great Grey Owl, Northern Hawk Owl, Rough-legged Buzzard and Gyr Falcon, just to name a few. This was partly due to the fact that we spent only a single day in the proper steppe and for we never went into real taiga. Nevertheless we came across 42 species and saw a new taxon for Mongolia (see full list below). Most species were extremely shy, especially when occurring in larger flocks. The Snow Buntings took already flight at a distance of ca. 250 m hence I did not take many pictures. 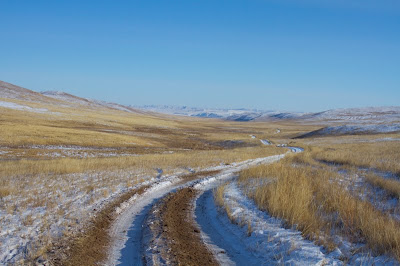 This is how the steppe should look like in winter, but most
areas of the steppe were totally covered by snow, not
because the snow was very deep: only 2 cm of snow were
enough to cover the overgrazed steppe! Khentii, Jan 2013 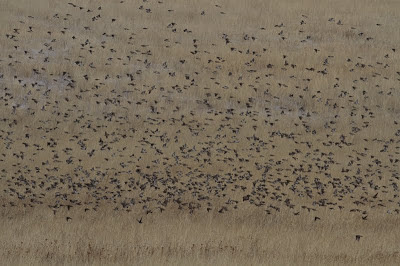 Part of the biggest flock of Lapland Bunting we saw.
There are 1506 birds in this picture! Khentii, Jan 2013

Common Goldeneye We found a group of 9 at an open stretch of the Onon River.
Black Grouse 277 plus about 50 in Onon-Balj NP.
Daurian Partridge Many groups along the Onon River, the largest holding 27 birds.
Eurasian Black Vulture A group of 8 at a carcass in Onon-Balj NP plus several twos and singles.
Golden Eagle two singles, one near the above mentioned carcass and another one sitting on a pole of a power line
Upland Buzzard 4 near Jargaltkhaan was the only “concentration”
Hen Harrier a male and a female (presumably a pair, as the female was following the male rather closely) north of Binder village
Saker Every now and then single birds seen, in total only less than 10.
Hill Pigeon 20 in Binder village plus the occasional bird elsewhere
Rock/Feral Pigeon It is always hard to tell “which is which” but we saw about 5 smaller flocks of up to 15 birds with some obvious Feral Pigeons; most birds were Rock Pigeon look-alikes.
Little Owl Two along the Onon River.
Great Spotted Woodpecker Few along the Balj River.
Grey-headed Woodpecker One at the Balj River.
Asian Short-toed Lark Only seen within the large flock of Père David’s Snowfinches, probably less than 20 birds.
Horned Lark We saw only birds of the local subspecies brandti with the largest group consisting of 80 birds.
Mongolian Lark Only very few birds seen, in total less than 10!
White-throated Dipper One pale morph bird of the polymorphic subspecies baicalensis at an open stretch of a small tributary of the Balj River.
Red-throated Thrush A single bird at the Balj River was the only thrush we saw.
Great Tit Several in the villages, some of them heavily stained with soot.
Azure Tit The only one we saw was near Binder village.
Eastern Marsh Tit Only two seen at the Balj River.
Willow Tit We saw only a small group of about 5 along the Onon River and a further two at the Balj River.
Long-tailed Tit About 15 at the Onon River were the only ones we came across.
Eurasian Nuthatch Only two birds seen, one at the Onon River and one along the Balj River.
Northern Grey Shrike All three birds seen belonged to the subspecies sibiricus and were on their watchout in the Onon-Balj NP.
Azure-winged Magpie A group of 30 was roaming through the riparian forest along the Balj River.
Common Magpie (leucoptera) Seen in every village and at the carcass in the NP.
Rook (pastinator) A single bird along the main road c. 120 km east of Ulaanbaatar.
Oriental Carrion Crow Each village had several pairs of these birds.
Common Raven Pairs well spread over the entire area we covered with a larger concentration around the carcass where about 25 were feeding.
Red-billed Chough We did not see many at all; most birds in the villages but also some in the steppe.
Eurasian Jay (brandtii) The only one we saw quickly disappeared into the forest of the NP which we were crossing by car.
House Sparrow Only few were seen per village.
Eurasian Tree Sparrow Commonly encountered in each village.
Père David’s Snowfinch (aka Small Snowfinch) A large group of about 500 along the main road near Jargaltkhaan (this flock contained also some Asian Short-toed Larks, Horned Larks and Lapland Buntings), and a second flock of 80 birds in Jargaltkhaan village.
Long-tailed Rosefinch We saw a group of 35 at the Onon River near Binder village and heard the species calling from the riparian forest along the rivers several times without seeing them.
Mealy Redpoll The largest flock was a group of 15 at the Balj River. Only three small flocks seen.

EURASIAN GOLDFINCH (frigoris) A flock of 7 at Dadal village was seen well before sunrise and they flew off soon not to be seen again. All members of this flock belonged to the black-crowned subspecies frigoris (by range; formerly also known as major). This is apparently the first observation of a Eurasian Goldfinch of the western black-crowned “nominate group” for Mongolia, so far only birds of the eastern grey-headed “caniceps group” had been recorded in the country. 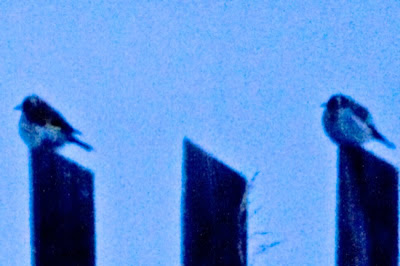 Record shot of the frigoris Eurasian Goldfinches
(I had to make up the picture a lot because it was shot
when it was still very dark, sorry for this kind of artwork),
Dadal village, Khentii, Jan 2013

Common Bullfinch We saw only 7 birds, all males belonged to the nominate subspecies.
Meadow Bunting The largest group had 60 birds and was seen near Dadal village.
Snow Bunting On the way to Ömnödelger village we saw a group of 140 birds and later another but smaller flock of about 15.
Lapland Bunting By far the most numerous birds on the entire trip with the largest group consisting of more than 3500 individuals. This species’ flocks were always very densely packed. 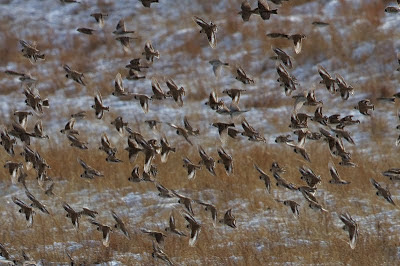 Part of the flock of more than 500 Père David’s Snowfinches,
all birds in this photo without the prominent wingbar
are Lapland Buntings, Khentii, Jan 2013 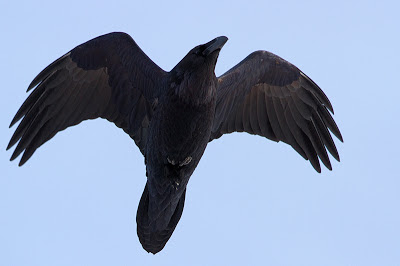 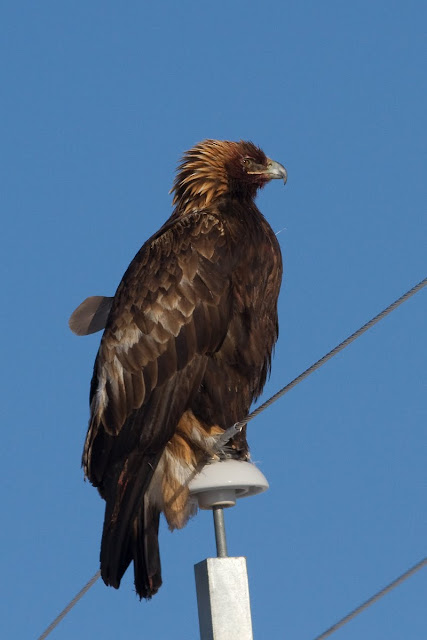 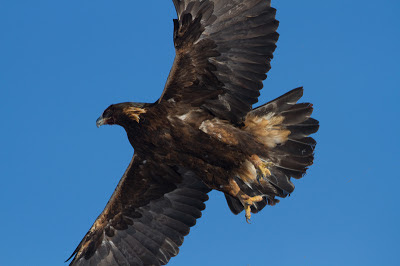 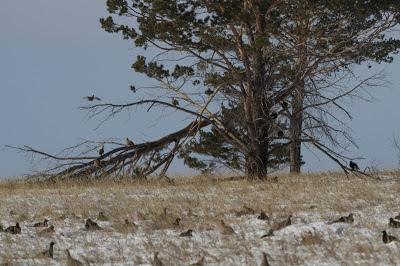 Part of the big flock of Black Grouse, Khentii, Jan 2013 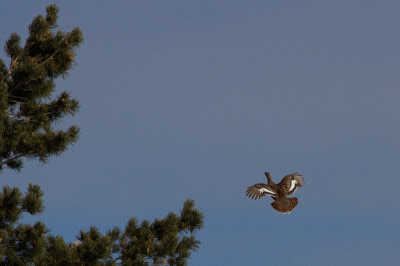 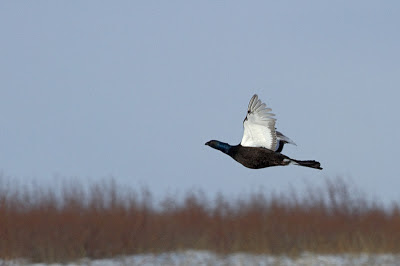 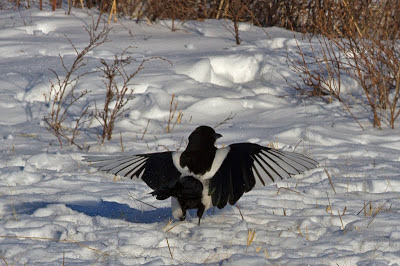 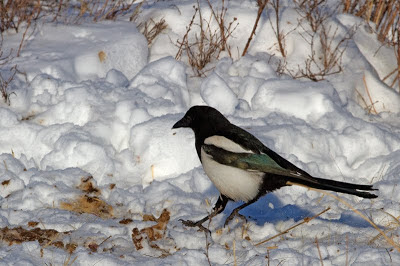 Well, very clear explanation about this topic, You did a good job and giving us such a useful information that you have shared with us. Thanks for sharing the best and useful information. I am very satisfied with your site and also with your information.
Regards
Swot Business promotions
Our strategic Top SEO services are comprehensive and aimed towards delivering a competitive edge for websites. A higher brand awareness generated by our SMO services empowers business to placement achieve a unique market.
For More Details visit : www.swotbusiness.com
We Having a lots of Satisified Customers of Our SEO Services,These following Companies are Getting SEO Services from our Company.
1) tour OperatorsPhoenix Tours & Travels
2) Maid Servicesphoenix maid service