text and photos © Paul B. Jones

From June 22 to July 14, 2012 we explored Mongolia on a trip designed and guided entirely by Axel Bräunlich of Birding Mongolia, and successfully accomplished with the expertise and services of the Ulaanbaatar-based tour company Nomadic Journeys. We had a wonderful time in this beautiful and interesting country. 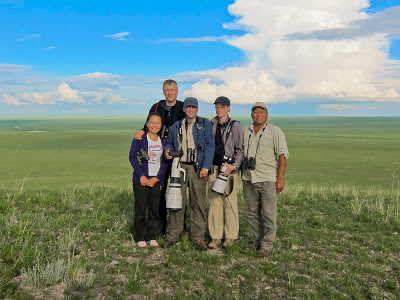 Thanks go to Axel Bräunlich whose blog “Birding Mongolia” triggered the expedition and to guide and driver Agii and Suur, our now close friends.

Thanks also to Jan Wigsten, Manda and all those behind the scenes at Nomadic Journeys HQ.

Thanks to everyone else who carried us across the steppes and mountains including our driver and support team in the northern lakes, our transfer driver out of Dalanzadgad, Batjargal, Anand and Yondon (the mobile ger camp team in the east ) and the workers at all the set ger camps along the way. Special thanks to Ranger Amar and the work of the Nature Conservancy in protecting Toson Hulstai and its spectacular population of Mongolian Gazelle. Thanks finally for the friendly hospitality from the herders and villagers we met on the journey.

The first leg of the trip led us to the Erdenesant Mountains. 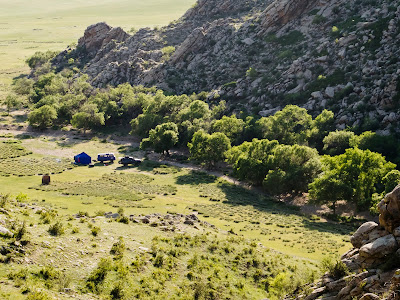 Our camp in the Erdenesant Mountains

For this part of our journey across Mongolia we stayed in temporary camps pitched each afternoon and taken down the next day. This was a particularly beautiful spot.

Unfortunately I was too focused on climbing the hill in the nice early morning light and was left with a rather blown out landscape on the way down when I finally got around to snapping a picture. 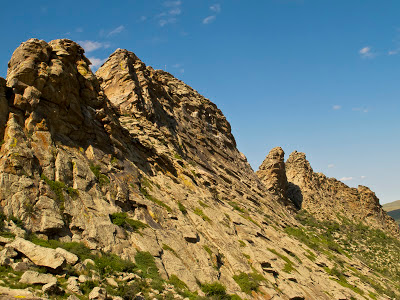 The raptor cliffs at Erdenesant

Not far from the town of Erdenesant in central Mongolia there is a range of mountainous rock outcrops that hold good numbers of vultures and other raptors. We positioned ourselves halfway up this cliff and waited for them to fly by. 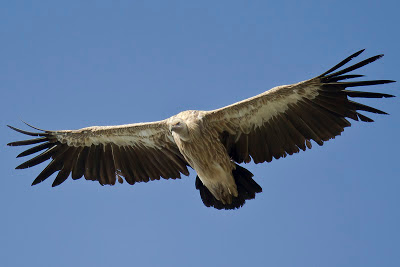 The Himalayan Vulture or Himalayan Griffon Vulture is an Old World vulture in the family Accipitridae. It is closely related to the European Griffon Vulture G. fulvus. Some uncertainty lingers over the exact status of the two species in Mongolia, although most if not all sightings are now thought to refer to himalayensis.

The photographs were taken in the mountains near Erdenesant, a small Mongolian town to the west of the capital city Ulaanbaatar. I was using a Canon combination 1DM4 camera and EF 800mm f5.6 IS USM L lens; all mounted on a Wimberley 2 gimbal head atop a Gitzo carbon fibre tripod. 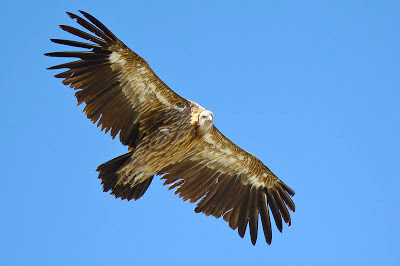 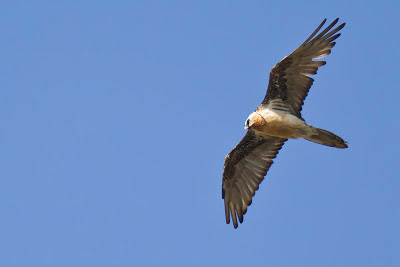 This beautiful bird of prey is also known as the Bearded Vulture and, in Mongolian, Ооч ёл or simply Ёл  (which translates as Yol). The image is heavily cropped because the bird was up fairly high but it was a great life sighting of a long coveted species. 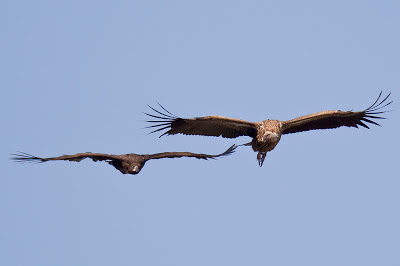 As I was tracking a Griffon in the viewfinder I noticed a Cinerous Vulture creeping up behind it. The Griffon was looking around so I assumed it knew it was being followed.

The birds were at quite a distance so the images are heavily cropped. 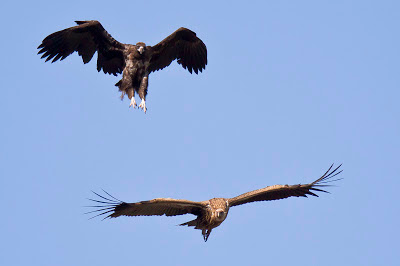 The Cinerous Vulture suddenly climbed above the Griffon.
It was now apparent the Griffon had no idea what was behind it. 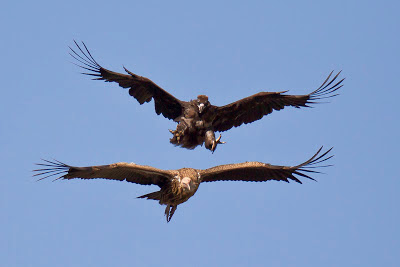 Still no clue of a big surprise. 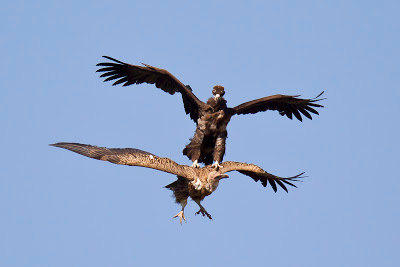 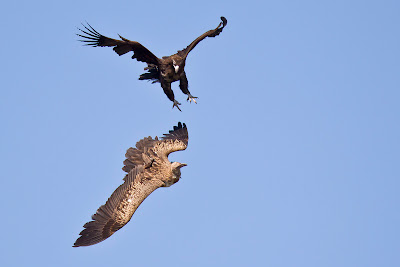 There was no burst of feathers or sign of blood and the attacker did not follow up. The two birds went their separate ways, with no apparent lasting harm.

Axel, your blog is great blog. I am a regular reader. Very nice trip reports.

Looks like one hell of good place to be birding to me guys ... love the gull and raptor pics / info and fascianting to think that eurasion goldfinches are 'twitchable' over there ... awesome! You have a new follower!