text and photos © Paul B. Jones


This is a compilation of photos of mammals taken during our trip through Mongolia, 22 June to 14 July 2012, led by Axel Bräunlich/Nomadic Journeys. The order here is not necessarily following the itinerary. 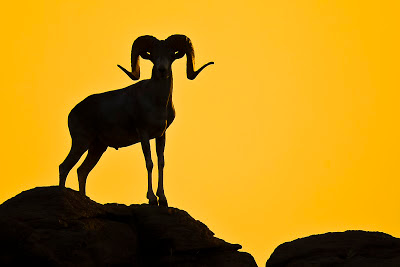 Argali in Ikh Nart at sunrise.

The Argali Ovis ammon is the largest wild sheep in the world. Originally found across the highlands of Central Asia, hunting and habitat loss from overgrazing domestic livestock have eliminated the species from much of its former range.

This silhouette was taken just as dawn broke near Nomadic Journey’s Red Rock Ger Camp in central Mongolia. The back light above the animal’s ears and below the horns creates the illusion of a pair of eyes, an interesting if somewhat eerie effect.

Argalis are doing well in the Red Rock Camp area, protected by the nearby Ikh Nart Nature Reserve. 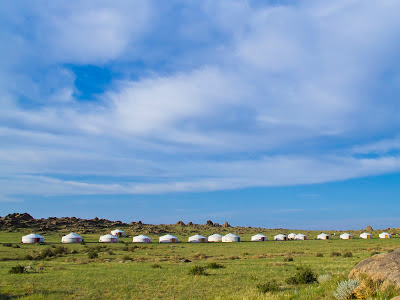 Set among the dramatic and rocky north Gobi landscape, Nomadic Journey’s Red Rock Ger Camp was the nicest accommodations of our Mongolia tour. The company has succeeded in creating an ecologically sound presence in a challenging environment that at the same time is a comfortable and friendly place to stay.

The camp borders on the Ikh Nartiin Chuluu Nature Reserve (Ikh Nart) in the Dornogobi Aimag or East Gobi Province of Mongolia. Established in 1996, Ikh Nart covers about 660 square kilometres of grassland and desert-steppe. The protected area shelters 600–700 Argali, as well as some 150 Siberian Ibex Capra sibirica. Ongoing studies of the local wildlife are being conducted by the Mongolian Academy of Sciences, Denver Zoological Foundation and other organizations.

However, the first stop after departing our arrival point Ulaanbaatar was the Khustain Nuruu National Park (aka Hustai National Park), located about 110 kilometres west of the capital city. 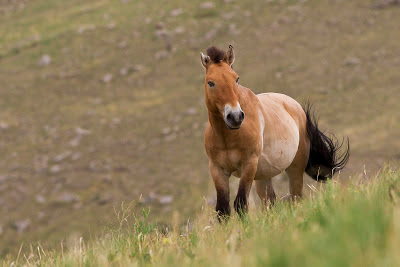 The park is known in Mongolian as Хустайн нуруу (Birch Mountains) and protects a beautiful area of rolling steppe, rocky hills and forest patches. One its key attractions is a reintroduced population of Takhi Equus (ferus) przewalskii the last truly wild horse in existence. 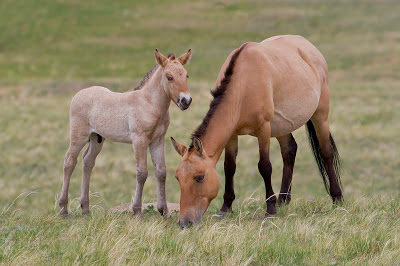 The Takhi, also known as Przewalski’s Horse (pronounced prrr-sha-VAL-skee’s), is a rare and endangered subspecies of wild horse native to the steppes of Central Asia. At one time extinct in the wild and existing only in captive populations, it has been reintroduced in Mongolia at Khustain Nuruu National Park and two other sites. 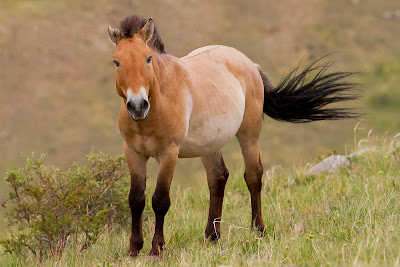 As we got a little close to the mare and foal the
stallion moved in on us. We decided to back off. 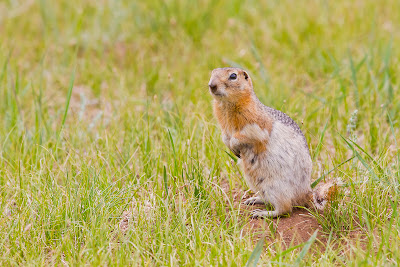 Photographed from our Toyota Land Cruiser’s window on the outskirts of Erdenesant, a small Mongolian town to the west of the capital city Ulaanbaatar. This colourfulish rodent is also known as Eversmann’s Souslik. 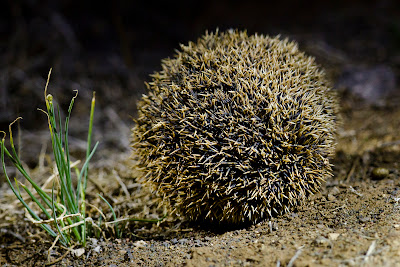 My first hedgehog sighting ever, spotted on a night walk at the Three Camel Lodge in Mongolia’s Gobi Desert. In addition to being a super neat life form, hedgehogs also occupy a huge space in popular culture. They don’t occur in the Americas and it was a big goal of the trip to see one, so this was an exciting moment.

I caught it out of the corner of my eye in the spot light and it immediately jammed itself up against a rock. When we approached closely it rolled into a perfect ball. 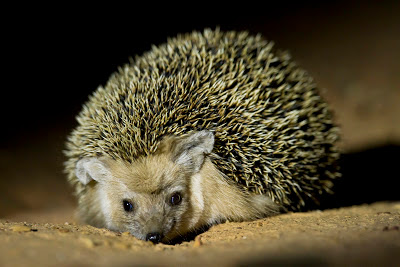 This one was photographed at the Tsagaan Suvarga (White Cliffs) Ger Camp, again on a night walk. After finding nothing on the steppe we swung by the camp’s small rubbish dump and noted movement in a discarded cardboard box. When we tipped the box’s contents this guy rolled out. Not a pristine wilderness experience but still a neat encounter with an awesome animal. 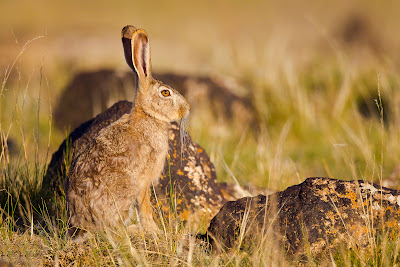 This photo of a Tolai Hare was taken at dawn at the Three Camel Lodge in Mongolia’s Gobi Desert. The animal was encountered on the low rocky outcrop beside the lodge and allowed close approach. 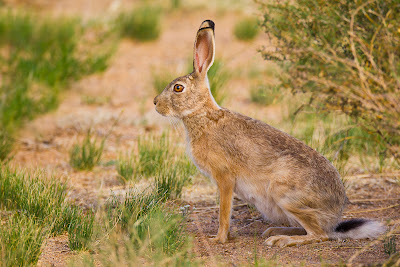 The Tolai ranges across Asia from the Caspian Sea east through Mongolia into northern and central China. It lives in semi-desert, steppe and rocky habitats, occupying a similar niche to North America’s Jack Rabbits.

We encountered good numbers of this pleasant species throughout our trip; they would often allow close approach. 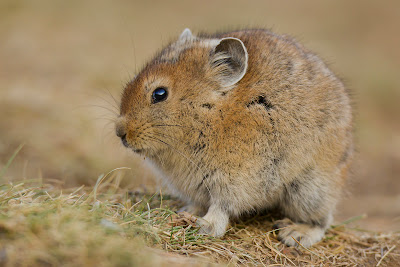 These animals were incredibly abundant at Yolyn Am in the Gobi Altai Mountains. As we entered the valley at first it was “Wow, a pika.” Quickly it turned to “Wow, a whole family”, then “Okay, there are at least a dozen of them over there” until finally “This is a bit creepy, hundreds of them are staring at us from the hills.” 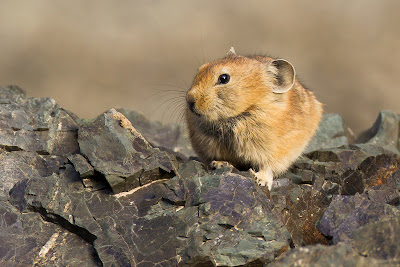 An adult surveying the land at Yolyn Am, Valley of the Lammergeier. You could spend a few days in the area just working on getting the ultimate pika image. 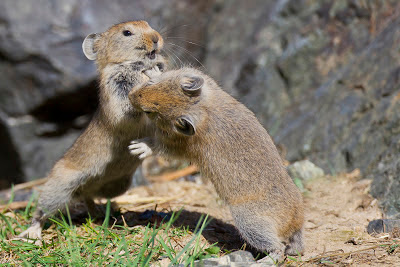 The extraordinary abundance of pikas in Yolyn Am seems to cause a fair bit of conflict within the population. These two young ones were engaged in a mild tussle but we saw adults really battling away - rolling down slopes, jaws locked on each other’s faces. 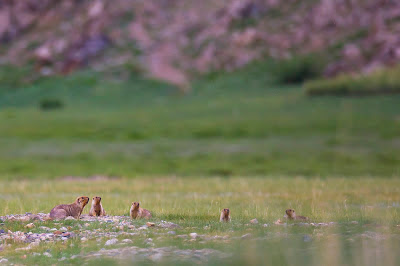 In early 1990 Mongolia underwent a revolution resulting in a multi-party political system and the transition to a market economy. But with the end of communism the great Mongolian Marmot Massacre began. Newly liberated entrepreneurs took advantage of the de-regulated environment and systematically shot millions of these large rodents for sale on the commercial meat market ($45 a carcass).

Marmots are now gone from most of their former range and have been declared an endangered species. The landscape is dotted with their abandoned burrow mounds, a sad reminder of the marmot’s importance as a soil aerator, prey species for larger predators such as eagles and wolves, and a shelterer of smaller animals and birds who also utilize their burrows.

Fortunately small pockets of this keystone species in the steppe ecosystem survived the onslaught. As the state re-asserts regulatory authority they are commencing a comeback. This particular marmot family, a sign of hope perhaps, was photographed at Gun Galuut Nature Reserve. They would not allow me to approach for a close up picture, a wariness of humans warranted by history.

You can’t really judge size by this photo but the marmots (also known as Mongolian Marmot or Tarbagan Marmot) are very large. When a Corsac Fox trotted by the big one on the left charged at it and chased the smaller animal away. 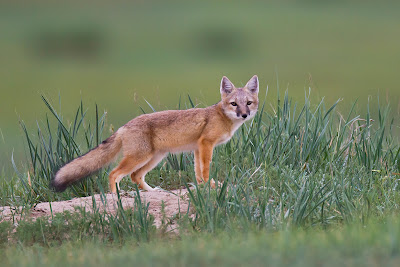 The Corsac Fox is a medium-sized canid found throughout the central steppes of Asia, including Mongolia. This one was photographed at sun set in the Gun Galuut Nature Reserve approximately 100 km east of Ulaanbaatar.

My plan was to obtain images of Siberian Marmot by lying low in the grass beside one of their burrows. Unfortunately the large rodents would not cooperate and mostly stayed out of sight. To my surprise, however, one of these beautiful foxes popped up fairly close by. It was a little bit nervous and would occasionally drop back underground. When it did that I would rush forward five metres or so and reposition my camera. When the fox reappeared and eyed me suspiciously I would quietly say “What? What? I haven't moved!” Eventually I was able to get close enough to take some photos.

Patience in photography is something I had to learn. Until recently I would give an animal or bird a minute or so and if it didn't pose I would move on. Now in certain situations I am willing to invest some time and wait for opportunities to arise. 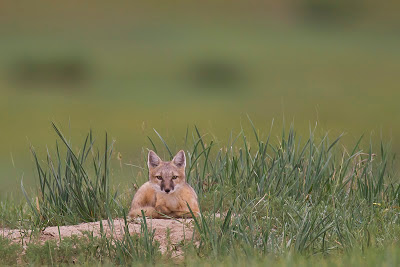 This beautiful Central Asian fox can be distinguished from the superficially similar Red Fox by its smaller size, slighter build and black (not white) tip to the tail.

We had three Corsac sightings during our three weeks in Mongolia. One ran quickly across the road near Erdenesant west of Ulaanbaatar. Two other family groups were seen amongst the marmot colonies at the Gun Galuut Nature Reserve, including this one pictured above that was photographed at dusk with a tripod mounted Canon 1D Mark IV/800mm f5.6 lens combo. 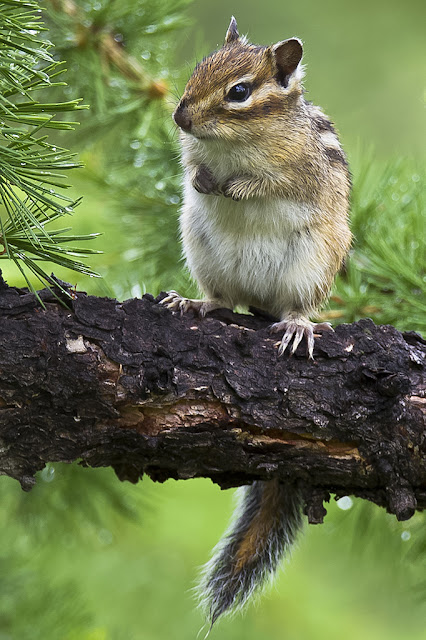 The Siberian Chipmunk occurs across northern Asia from central Russia to Japan and is the only chipmunk found outside North America. This one was photographed in larch forest in north-eastern Mongolia.

Woow, you've posted a marvelous series of picutres, I've enjoyed all of them. Excellent post
Thanks for sharing

I really loved your post and the visual you have shared with us. I just fell in love with these tour sites. I got good idea and information regarding beautiful nature and mongolian4seasons tour. Thank you so much.thank you for share this post.
Best places in Mongolia
mongolian best travel agency
terelj National park tour