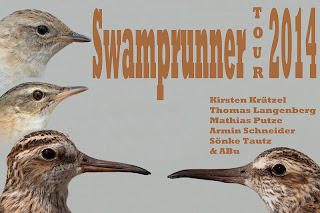 
Regular reader s of BIRDING MONGOLIA will be quite familiar with the participants of this year’s expedition to Mongolia’s Far East. All of them had been here previously at least once. In particular, Thomas Langenberg and Mathias Putze had contributed lots of excellent pictures (see here: Mountainbirds and here: Some Eastern Specialities and More). Travelling with those two guys was amazing: they alone took more than 25,000 frames during the trip! Only a very small fraction of them can and will be featured on Birding Mongolia.

Our trip started on 27 May 2014 and we hoped to see some of the late migrants like the different species of grasshopper warbler (Locustella including the former Bradypterus species) or flycatchers of the genus Muscicapa. We also intended to try our luck on waders. After a slow start at the Tuul River in UB, where not a single Phyllosc was seen, we drove to Choibalsan and spent the night at the Kherlen River, but our first real stop was at the famous Buir Nuur.

Here the situation had completely changed. Thanks to the wet summers of 2012 and 2013 the water level had risen by more than a meter. That meant that we had to alter our plans. The 2011 campsite was flooded and we had to choose an alternative site. Lots of lagoons in the south-western part of the lake did not only support a large number of waders, there was a rather unpleasant consequence as well: MOSQUITOS. Millions of them!

Mongolia’s Far East is feared for its strong population of mosquitoes and during our entire stay in the east we were awaited by millions of female gnats wherever we were. After a while, those parts of the skin, which were permanently exposed, did not show any reaction anymore. Unfortunately those parts which were exposed only few times or less per day could not adapt to the presence of the mossies—hence we frequently caught itching at the most uncomfortable body sites. 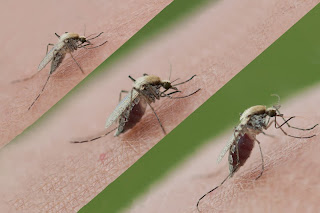 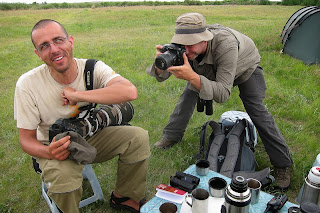 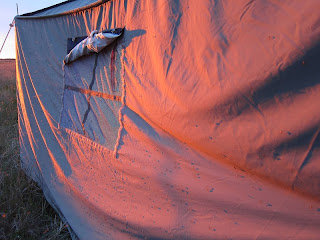 There is, of course, protective clothing like head nets or our “mossie stopper” gloves. But taking out a Bearded Tit from a mistnet is very difficult with gloves and it is not at all nice without them, especially during a mosquito storm. Every evening we were happily crawling into our tents to get rid of the attacks and only after we had left the east there was an obvious relief. 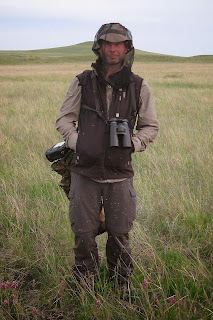 Proper clothing was much helpful to be able
to concentrate on photographing.
Eastern Mongolia, Jun 2014 © K. Krätzel 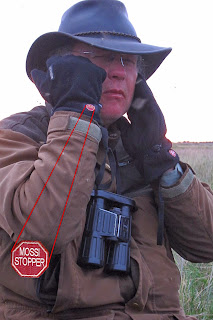 My grim face could not deter the mosquitoes
so I had to rely on my “mossie stopper” gloves.
Eastern Mongolia, Jun 2014 © K. Krätzel & T. Langenberg

Wherever we came, the water levels had been distinctly higher than three years ago and there were hundreds of oxbow lakes creating wetlands and swamps. Access to several sites was only possible by walking through damp areas. Sometimes the water level was even too high. This was not the only reason to call this trip “Swamprunner Tour 2014”. One of the few wader species we caught was Broad-billed Sandpiper which is called “Sumpfläufer” in German and which could be literally translated into “swamprunner”. As it is not that often seen in Germany we were much delighted to find more than 40 foraging at Buir Nuur. The subspecies here is sibirica and we will soon publish a larger series of photos of this more colourful subspecies (more colourful than the nominate occurring in Europe). And there will be much more on show: we had a first for Mongolia, several second records, the first breeding record of… for Mongolia, achieved the first in-field pictures of… and lots of fantastic photographs…

…so watch out! We do the same! 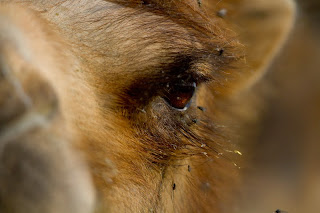 Aps abt moskitos. In 2010, we went to the ARRCN meeting from Irkutsk to Ulaanbaatar via car. In the evening, we stopped to spend night at the bank of Haraa Gol something south of Darkhan and to get Ulaanbaatar tomorrow morning as there was nothung to do in Ulanbaatar in the night. A weather was good, sunny with some wind, Larks and Mongolian Buntings sang. But just when the sun sat down such lots of moskitos appeared like in the best areas of Siberia that we took our tent in one minute, sat in our car, and went forward at once. Then we stopped to sleep inside the car somewhere before Ulaanbaatar close to the road, with gers, cows, and manure around, but without gnats, too.
Best,
Igor