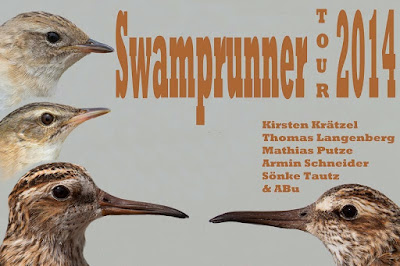 I had always dreamt to visit the famous and still almost totally unexplored Nömrög SPA in Mongolia’s Far East. No surprise that I was very disappointed when access was denied because of the high fire-risk in 2011 (see here). Meanwhile, I had heard about a program to support tourism in this particular region and hence I was very optimistic when we left for the east again in 2014.

Long time before we headed towards Choibalsan, Abu had worked hard for getting our permits. Nevertheless this was only made possible with the help of Jan Wigsten of Nomadic Journeys and our guide Bolormunkh of WSCC. As usual, there had been loads of paperwork to be done, something that contradicts the idea of improving tourism! A visit to this SPA is still way too complicated!

On 6 June, with our permits in the bag, we visited the headquarters of the SPA and showed our permits. Of course, a new obstacle turned up: we had to get new permits PLUS the head wanted us to hand-over ALL our memory cards after our visit. Ridiculous! Because of language problems (the head didn’t speak sufficient English and Abu’s Mongolian was also not good enough) the local English teacher had to come to the office. For us this meant: wait. We used this “incubation time” to go birdwatching in the vicinity. It turned out that the English teacher was of only little help in regards of translating/interpreting as she spoke almost no English (!), so everything was discussed via “fone” with the help of Abu’s wife. After a while our access was granted and the head just wanted a short report about our visit from us. So we set off to the southeast. Almost.

There was yet another visit to be done: the barracks of the border police. Here we had to show our documents and could use this new and second “incubation time” for shopping and for having lunch. So we did and then, after several hours, we finally could leave Sumber for NÖMRÖG. Nömrög, here we come! Yeah!!!! 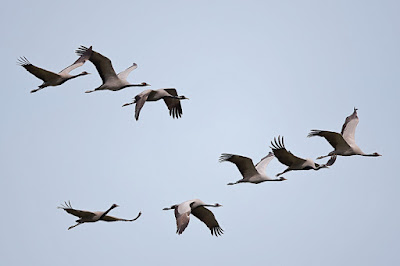 A kilometre south of Sumber, at a shallow lake, we could do the first proper birding, alas, only commoner species were seen: a group of 250 Demoiselle Cranes, 30 Common Cranes, quite a lot of Eurasian Wigeons mixed with as many Northern Shovelers, about 70 Black-winged Stilts and 110 Pied Avocets, some of the latter with chicks and a single Eastern Black-tailed Godwit. Not the best start, indeed.

Despite of our time loss in Sumber, we intended to venture as far as possible into the nature reserve. Even for Mongolian standards the tracks were quite bad and we slowly bumped ourselves through rich meadows with abundant flowers and even the occasional bird. The sandy soil hosted clumps of pine forest which nestled between the dunes. There were even bogs and small ponds fringed with willow thickets. Fantastic scenery and then: a really big bird took flight not far from the car. This was a male Great Bustard but else we did not see much until we came across our first beautiful adult male Pied Harrier. Fantastic! 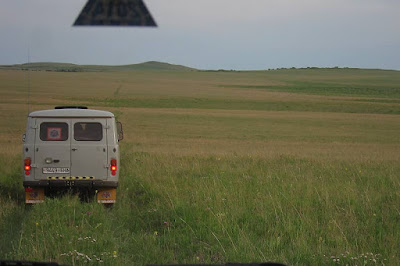 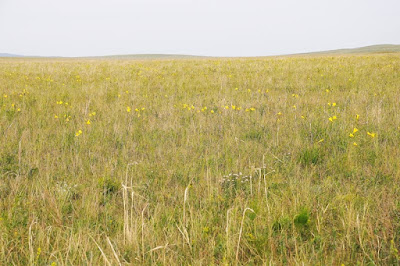 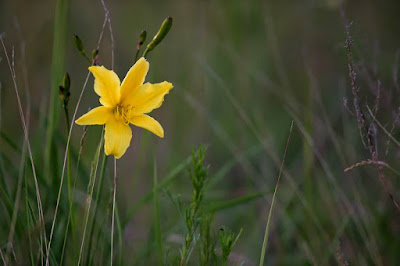 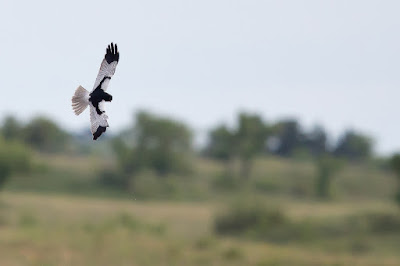 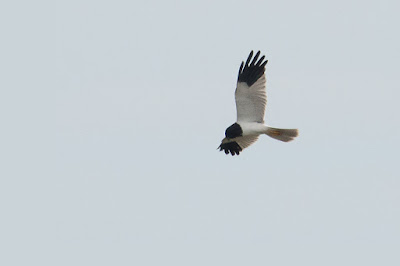 Abu decided to camp near a small pine forest and so we did. As soon as we left the car we were welcomed by millions of females which apparently had awaited us. The density of mosquitoes was so high that we walked around while having our dinner instead of using our chairs. These mega-aggressive blood-suckers did not waste time; they landed with their stylet first, ready to suck immediately.

Behind the pines was a boggy area and on the small lake we found a drake Falcated Duck which was accompanied by a few Tufted Ducks and Common Teals. The presence of Black Grouse was revealed by their droppings and we also found the remains of an unfortunate male. We not only saw grouse droppings but also bigger ones, left by a Moose. Fine, but where are they? Not long after we localized a cow with her calf. Unfortunately these magnificent animals decided to take a rest on the ground in the willow thickets before all of us could see them.

Ahh, yes, the birds. Not really exciting species but with Isabelline Shrike, Thick-billed Warbler, Long-tailed Rosefinch, Stejneger’s Stonechat, Siberian Rubythroat and our first Chestnut-eared Bunting seen we could escape the hordes of mosquitoes not without having a couple of moose-beers before total darkness. 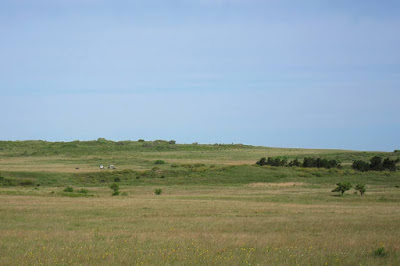 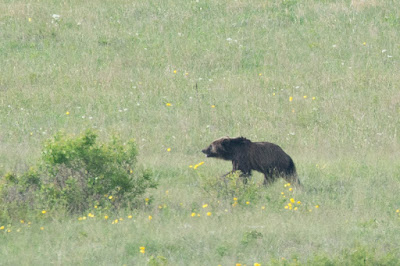 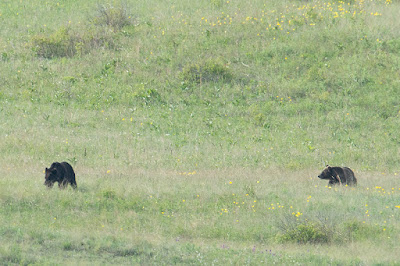 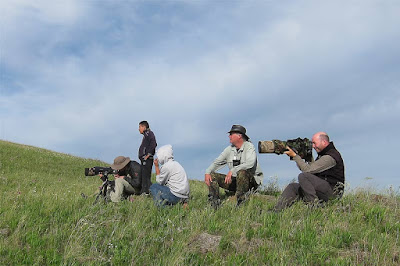 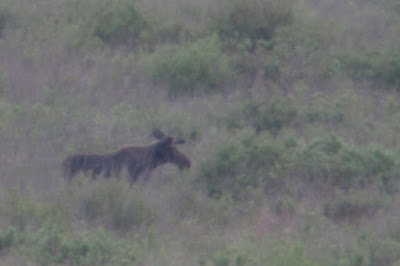 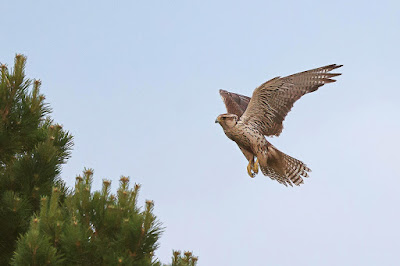 In the morning of 7 June we not only saw another female Moose in the same valley; there was a male, too. Near our camp, Saker and Upland Buzzard were attending their respective chicks while Armin went off for searching his favored mammal: Grey Wolf. This time no luck with this one but he and Kirsten and Sönke had more luck with something else. They saw a mother and a cup Brown Bear strolling along the “moose valley”. With the aid of our radios everybody was put on red alert immediately and even our drivers joined for our run to see the bears. Nobody cared any birds until we all had excellent views of the undisturbed predators. This is by no means a common sight in Mongolia which also hosts the pale variant of Brown Bear called Gobi Bear of which only 25 or so roam the desert mountains of Mongolia’s south. There are, of course, Brown Bears in the taiga in northern Mongolia. During this mammal morning we encountered 2 male Black Grouse, a male cristatus Brown Shrike, now even three male Falcated Ducks on the same pond and Japanese Quails while Skylarks and Richard’s Pipits were abundant in the steppe.

After a very happy breakfast we drove (Mongolian Lark, Black-browed Reed Warbler were added to our Nömrög List en route) all the way down to the border police station from where we already could see the other side of the Nömrög river. But we had to accept that crossing it with our cars would be impossible. A Mongolian film crew checked out the situation with one of their 4-wheel-drives but they got stuck 100 m before the river and could not drag out the car without our help. No chance for exploring the other side. Meanwhile we had given our documents for yet another thorough check and during this new “incubation time” we went birding again. A colony of Eastern Rook was found a little to the east and there were about 15 male Black Grouse, Barn Swallows (these were rather pale-bellied which should make them belong to the subspecies mandschurica), at least one lagopodum House Martin, a few Amur Falcons, a pair of Long-tailed Tits feeding, and Great Cormorants. Delight of the day was a male Yellow-rumped Flycatcher which held a territory in a small patch of forest. 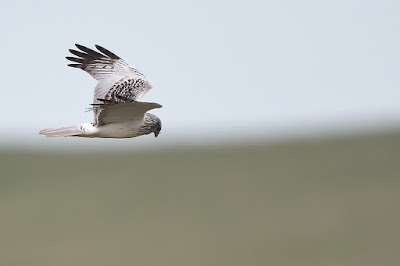 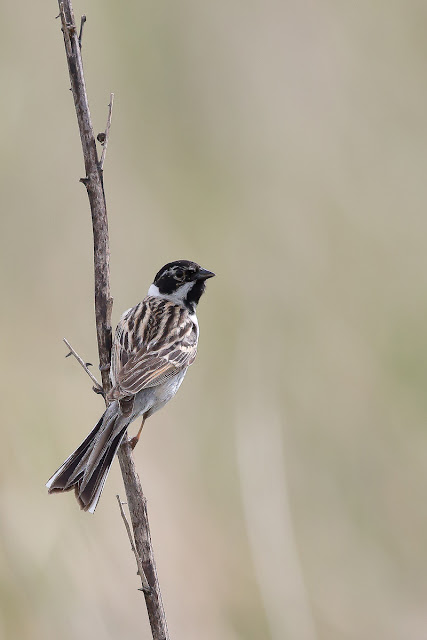 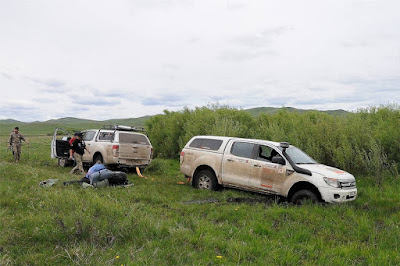 Stuck in the mud!
Nömrög, Eastern Mongolia, Jun 2014 © A. Schneider 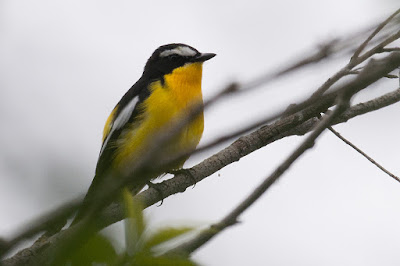 Then we left the outpost disappointed for driving back to toward Sumber and this time we took another track. In the early evening we set up camp near two small lakes and not long after we had pitched our tents we again saw a moose. Eastern Marsh Harriers were patrolling the reeds, which held lots of Pallas’s Grasshopper Warblers and also Brown-eared Rail, formerly regarded as subspecies of Western Water Rail, which was frequently calling. From the many bushes Yellow-breasted Buntings performed well. Surprisingly, there were three Stejneger’s Scoters on one of the-the bigger one-lake. Later in the evening a Grey Nightjar started calling from the forest. To end the day we had an “anti-mossie beer”, or was it two? 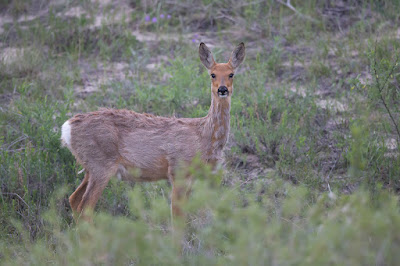 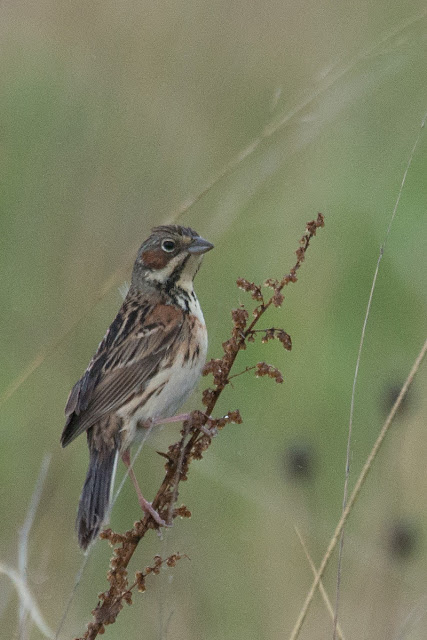 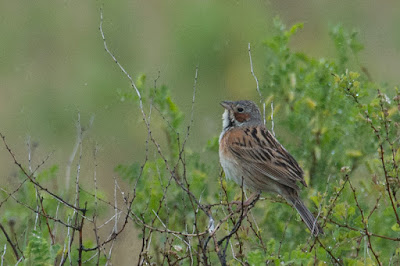 Already in the night it had started to rain, sometimes really hard. So in the morning of 8 June everything was soaking wet. This could not prevent us from birding but after a few hours walking through the high wet vegetation we gave up and left for Sumber. The buntings were still active and we tried our luck on the gorgeous Chestnut-eared Bunting with varying success. It was still raining hard all the way back to Sumber but at least we came across a pair of Pied Harrier and flushed (not intended) several Great Bustards. 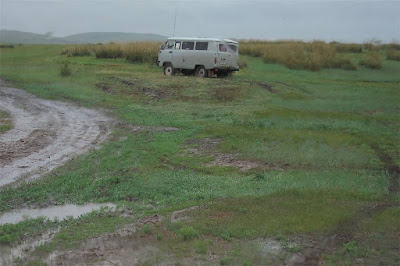 To conclude, even with all the superfluous hassle of obtaining permits and several timing consuming permit and passport checks, even without reaching beyond Nömrög River, even with all the biting flies, to see one of the most unspoiled and-as very important as very rare-livestock-free parts of Mongolia is worth the effort. Thank You, Jan! Thank You, Boogii!

Dr Ogudugu offering the best and greatest service related to love spell, enemy spell, protection spell, child birth. I'm from Nigeria. I am doing these spells from past 25 years. I will give 100% sure result. My spells are very powerful and for instant result. I am not fake and i can give you result by my powers. My powers shows you the instant result. If you have any problem in life like love problem, beauty problem, child birth problem then contact me once. I am the person who can give you the right advice. I will consult your problem with my god and reply you as soon as possible. There is nothing which i cannot solve by my powers. I am doing this for right cause, I use this to server people. My powers are not for fake people or for cheater.