Fly the Vulture Home: Rehabilitation and Release Program for a Cinereous Vulture in Thailand

The rehabilitation of a Cinereous Vulture found exhausted in Thailand has received a lot of press attention in SE Asia (and further afield), and it has been very positive in raising public awareness for the plight of vultures in the region. It is planned to release the vulture back into the wild in Mongolia. 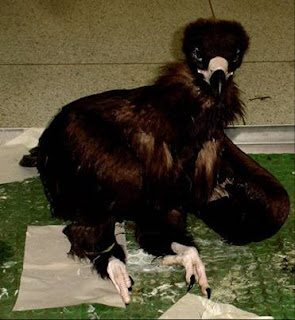 The juvenile Cinereous Vulture. Note its exhausted posture. It is
unable to stand. Photo courtesy Mrs. Rewadi Lerdariyakit, Thailand.
A Cinereous Vulture (or Eurasian Black Vulture / Monk Vulture, Aegypius monachus) was found exhausted in Chantaburi province, South-east Thailand, and was initially cared for by Miss Iola Veal, who has experience of bird rehabilitation through volunteering for the Royal Society for the Protection of Birds (RSPB). On January 3, 2007, Miss Veal looked for professional assistance for rehabilitation and release of the vulture and contacted, through Mr. Peter Ericsson, a Swedish birder, Dr. Chaiyan Kasorndorkbua, Faculty of Veterinary Medicine, Kasetsart University. The vulture has since been relocated on January 5 to be under veterinary care by the faculty’s avian veterinarian team in Kasetsart University Wild Bird Care Unit. Complete clinical examination has showed that the vulture is in juvenile plumage and is a male. It was markedly emaciated and weighed only 6 kg. Reportedly the weight range of wild individuals of the species is 7-12.5 kg. However, fortunately it has no other life-threatening illnesses. The vulture is free of hemoparasites, Aspergillus-induced pneumonia, lead poisoning (plumbism), zoonotic bacterial organisms (i.e. Salmonella spp.) in the faeces, or bone fractures. A preliminary test at Kasetsart University Veterinary Diagnostic Laboratory, Kampaengsaen campus, for Avian Influenza showed that the vulture has not been previously exposed to Avian Influenza (AI) type A or AI H5 subtype, which has caused acute deadly illness in humans in South East Asia. Subsequently, the National Institute of Animal Health has confirmed that the vulture is not infected with the deadly Avian Influenza H5N1 or Newcastle Disease, an internationally important infectious disease in poultry. Currently, the vulture, named “Anakin Skywalker” by the Thai media to increase public awareness and support, weighs 8 kg and demonstrates a marked appetite with an eagerness for flight.

A rehabilitation and release program, sensationally called “Fly the Vulture Home Fund” has been launched under a working group to rehabilitate the vulture to pertain its full strength for release into the wild where it belongs. The program comprises three important stages:

1. Rehabilitation of the vulture’s health to gain normal weight and to be ready for flight under the responsibility of Kasetsart University Faculty of Veterinary Medicine. The period is expected to be 2-4 weeks approximately. Update on the vulture rehabilitation and video clips, showing the behaviour of the vulture, can be found at the topic “ Fly the Vulture Home” at the following link;
http://thairaptorgroup.com/TRG/modules.php?name=Forums&file=viewtopic&t=783

2. Applying a satellite telemetry unit onto the bird’s wing with the assistance of Wildlife Conservation Society so that, once released, the vulture can be tracked about its life and migration to enhance the limited knowledge of the species in Asia, where currently holds the largest population in the world with a global population of approximately 20,000 individuals, both in Europe and Asia. Cinereous Vulture is considered to be a vagrant in South East Asia, including Thailand. 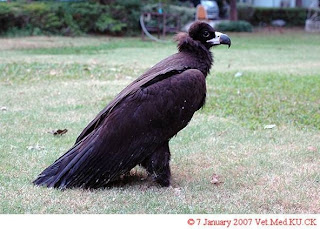 The juvenile Cinereous Vulture in rehabilitation after
gaining strength. Note its normal posture.
3. Release of the vulture in a suitable habitat with the highest probability of survival. Considerations have been originated through consultation of regional and international experts, including Wildlife Conservation Society, Philip D. Round of Mahidol University and National Aviary, and it has been agreed that release of the vulture in a breeding (summer) ground would likely give the bird a significant chance for survival, rather than a wintering ground since the bird is a juvenile and it is a social species that requires a sustainable population and intraspecific flock to increase its survival chance. The working group has placed Mongolia as a priority of options to release the vulture. Other localities have also been considered such as northern India, where it is a wintering ground for the species and the population is reportedly increasing (BirdLife Species Factsheet, 2006) and Doi Lang in Chiang Mai Province, a mountain line along the second highest peak in Thailand. However, Indian vulture populations have been on an imminent threat due to the epidemic poisoning of a non-steroidal anti-inflammatory drug (NSAID), called Diclofenac. Doi Lang is lineated as a Thai-Myanmar border and is adjacent to southern China within a flying and soaring distance. Other places in South-east Asia, e.g. Laos, Cambodia or other regions of Thailand, still have a marked risk of hunting pressure due to a misperception of hunting large-sized birds among a certain number of locals. The working group expects the vulture to be ready for release in late February or March.
For more information contact: Chaiyan Kasorndorkbua, DVM, PhD, Assistant Professor of Veterinary Pathology, Kasetsart University, email: trogon at gmail.com
_____________________________________________________________
Thanks to Nyambayar Batbayar, Wildlife Science and Conservation Center, Uaanbaatar for forwarding the information.