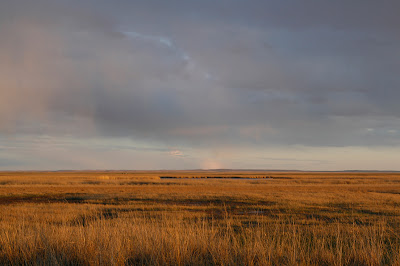 Ikh Tashgai Nuur: the breeding habitat of Mongolian Pallas’s Bunting is in the foreground, the background is occupied by Reed Bunting and the area in between is the home of Ochre-rumped Bunting, May 2011, © M. Putze

Two species in particular make Ikh Tshgai Nuur most interesting for visiting birdwatchers. One is Ochre-rumped Bunting (also called Japanese Reed Bunting). The only known territories in Mongolia can be found here. The other species is Reed (or Northern) Parrotbill, which can be seen in Mongolia only at Ikh Tashgai Nuur and at the Khalkhgol Delta (in the north-east corner of Buir Nuur), but the delta is off limits for foreign birdwatchers. Apart from the afore mentioned delta, Ikh Tashgai Nuur remains apparently the only (!) lake in the east with sufficient reeds. They grow up to an impressive height of 4 metres, but most of the reeds are not that high. As everywhere in Mongolia, grazing is a problem. Low scale grazing has been proven as beneficial for reed-species like Bearded Tit and bitterns, as it increases the number of micro-habitats. Unfortunately, the east has not received enough rain during the last decade and now the combination of drought and heavy grazing poses the greatest threat to any stand of Phragmites (not only here but in the whole country). Habitat destruction like this will lead to the extinction of all reed-specialists if the process cannot be halted. 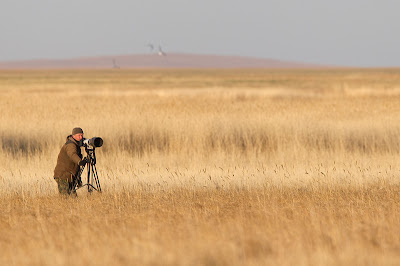 ABu trying to get close to the Ochre-rumped Bunting
but no luck this time, Ikh Tashgai Nuur,May 2011, © M. Putze 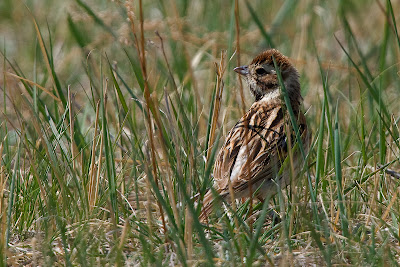 We found the sought-after bunting directly near our camp on 19 May. A male had taken residency in the wet grassland bordering the reed bed. It was singing from atop the tussocks, but appeared but very shy. Other noteworthy birds logged were a single resting Little Curlew, 20 Bewick’s Swans (outnumbering their bigger cousins by 4!) and a flock of cranes. It consisted mostly of Common Crane (180) but there were also 2 White-naped and 14 Hooded Cranes. 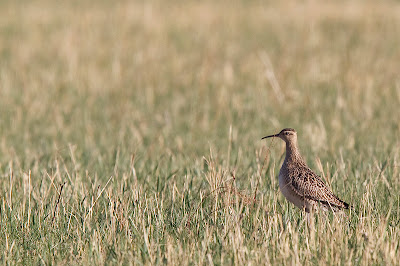 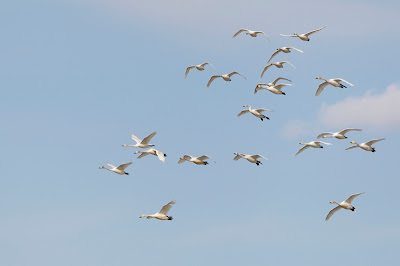 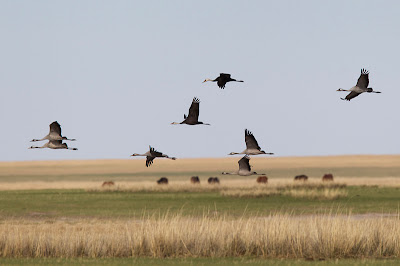 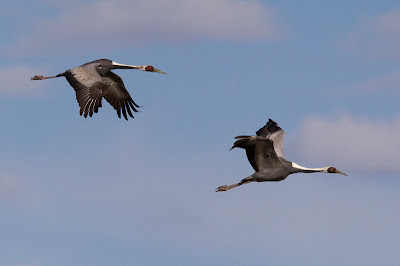 During the next days – we stayed at Ikh Tashgai Nuur until 22 May – we searched for the Parrotbill, but we couldn't find any. Instead we saw many Bearded Tits and Reed Buntings. Reed warblers had not arrived yet - thus it was no fun to birdwatch the reeds. Luckily we saw some other birds of interest like a Lesser White-fronted Goose (less than 10 records in Mongolia) and a migrating Eurasian Collared Dove on 20th, 2 migrating Buff-bellied Pipit on 21st (plus one the next day) and a 2cy Black-crowned Night Heron on 22nd.

Quite nice to see also were 9 pairs of Falcated Duck on the lake. The migration of waders and terns set on and we had some bigger flocks of migrating Spotted Redshank, Whimbrel, Little Curlew and White-winged Tern. 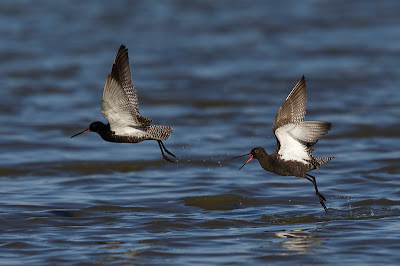 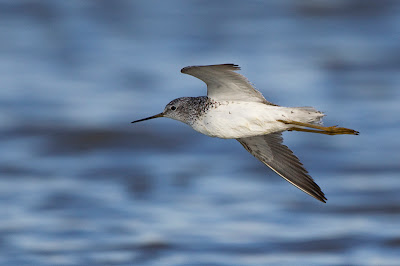 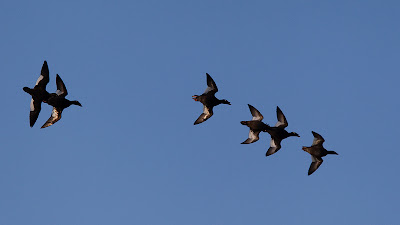 In the reeds was a night-roost of wagtails, with Citrine, Grey and Eastern Yellow Wagtails present, the latter being the most numerous. 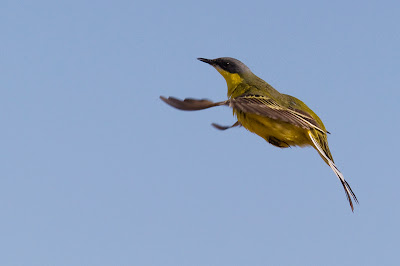 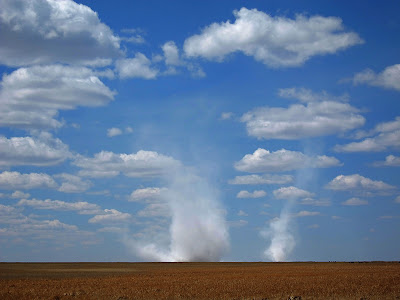 Some of the smaller lakes in the region were already dry
and covered by a salt-layer which sometimes was blown
up into the air, Ikh Tashgai Nuur, May 2011, © M. Lindemann

We were very disappointed when we left Ikh Tashgai on May, 22nd as we hadn’t found the Parrotbill. But there was hope: We were driving to the village of Sumber to get our permit to another birding hotspot: Numrog, the most southeastern part of Mongolia. Yet there was another big disappointment waiting for us…