Just before we reached the small village of Buir we stopped at a shallow lagoon which was full of birds. It was quite windy this day, 26 May, but most of the birds were in “our” corner. So we erected our tents and went to the shore for a check. 20 Asian Dowitchers were feeding among a flock of 100 Eastern Black-tailed Godwits. Also busily foraging were single Terek and Broad-billed Sandpipers. We spotted 5 Whiskered Terns in a carrousel of White-winged Terns. Birds were commuting to another spot which we checked as well. This was the “Great Knot Lagoon” but either the water level or the exposure to the wind or both was not suitable for mass-congregation and thus there were only few Avocets and Black-winged Stilts.

Next morning we found an Australian-flagged Red-necked Stint but as not many birds remained at the lagoon we left for the delta. After our registration at the border station we checked (by several scopes and for about 1.5 h) the reeds for the parrotbill but despite our efforts we did not find any. 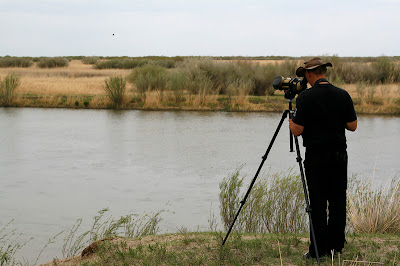 We had expected to see Purple Heron here but apparently they hadn’t arrived yet. Basically we saw only Reed Buntings plus hundreds (not thousands as reported in previous years, so possibly declined) Great Cormorants. Noteworthy were 3 Chinese Pond Herons, 2 Great Egrets, a Greater Spotted Eagle and a bird which we regarded as an escapee: Common Myna. 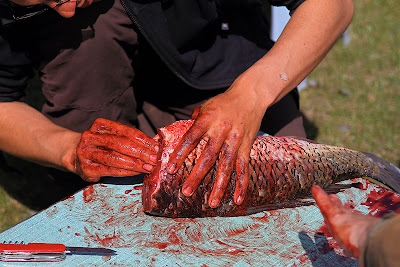 As lunch we had Amur Carp Hemibarbus labeo and in the afternoon we paid the watch-tower-lagoon a visit. Another Chinese Pond Heron was walking slowly through the shallows here while the 9 Asian Dowitchers were much more agile. Our only Sharp-tailed Sandpiper was roosting on the beach and the first Eastern Yellow-Wagtail of the subspecies taivana was seen. All of us used the opportunity to watch a stunning bathing male Yellow-rumped Flycatcher.

We slept above the huge Sand Martin cliff and treated ourselves a bath in the lake (nice sandy beach but very shallow water).

The huge colony of Common Sand Martin stretches along the shore for about 3.8 km (Alfons measured it by GPS) and we calculated that there should be about 15,200 to 22,800 breeding pairs, depending on which correction factor was applied. Anyway we had no idea whether anyone ever has studied Sand Martin in Asia and thus we took the correction factors which are used for European Sand Martin colonies. So there were well over 30,000 birds attending this colony. We could check only a mere of 120 individuals thoroughly (on 27 May). Indeed, all turned out to be Common Sand Martin and we assumed that not a single Pale Martin is breeding at this site. (comment by Axel: on 7 August 2010 we estimated at the same site c. 70,000 nest holes along 2 km, but only 80 martins present). 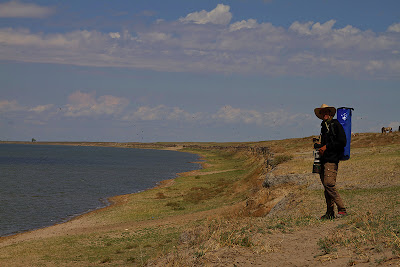 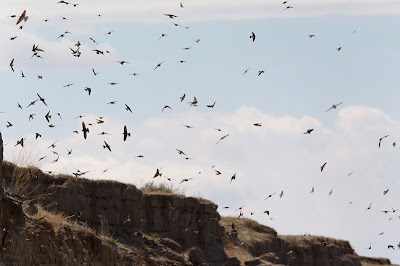 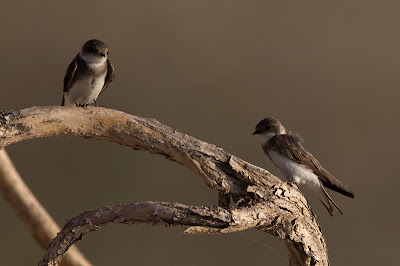 Seawatching did not yield any good birds and after lunch we drove to the south-west corner of the lake where we stayed until 30 May (on the way the only leucopsis White Wagtail was seen). Another Buff-bellied Pipit dropped down beside us on 27 May, but flew off quickly, while the 11 Bewick’s Swans did not. 3 taivana were present on 28 May, yet another male Yellow-rumped Flycatcher was logged and 2 "far-eastern" Little Stints tried to hide among the Red-necks, but without success. 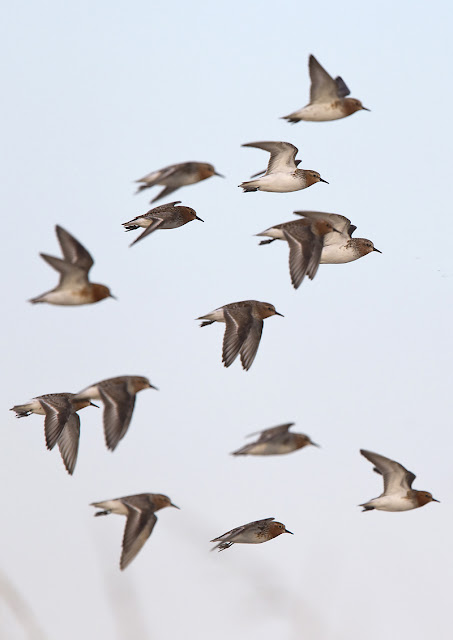 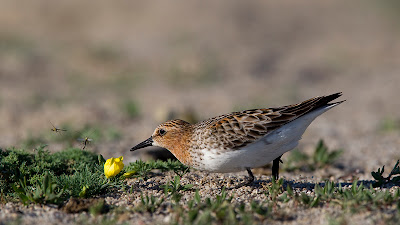 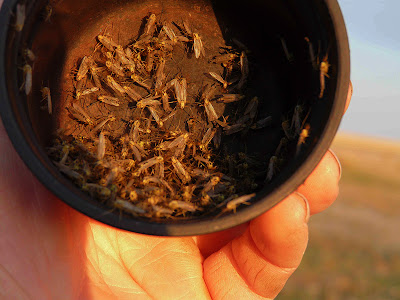 Never leave your cup unattended.
Buir Nuur, May 2011. © A. Pennekamp

While checking the many Red-necked Stints (we estimated that about 2000 were using the enormous amount of available bio-mass) for leg flags (4 flagged individuals seen) we suddenly spotted a Forest Wagtail on 29 May, a second record for Mongolia, but it was very shy and only a record-shot could be obtained. The first record of this nicely patterned species was at the famous Gobi Camp (Juulchin 1) near Dalanzadgad on 14 June 2000. 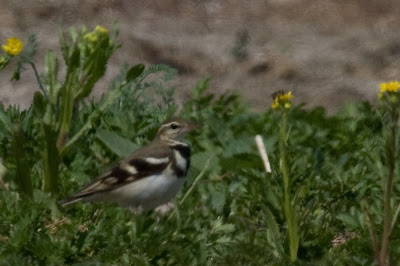 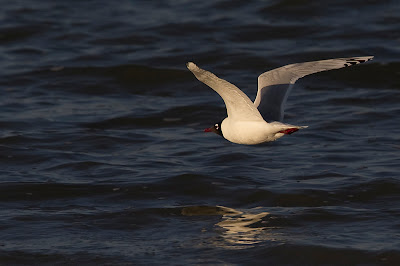 On the same day Purple Heron arrived. 4 adult Relict Gulls flew past our camp on 30 May. That day Alfons and Manfred headed back to UB and virtually the last bird we saw together was a nice male Oriental Plover. 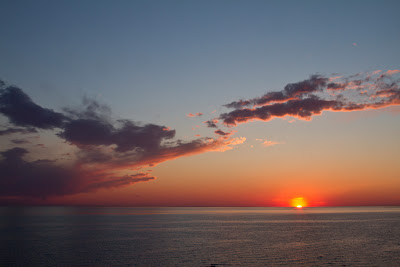 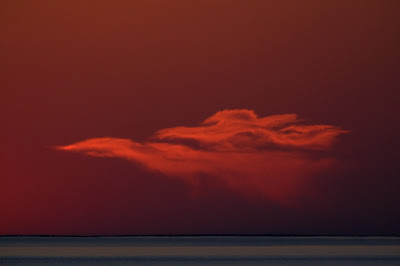 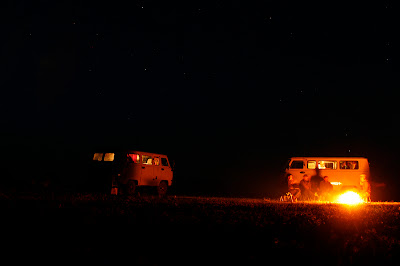 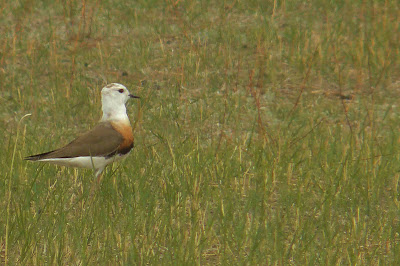 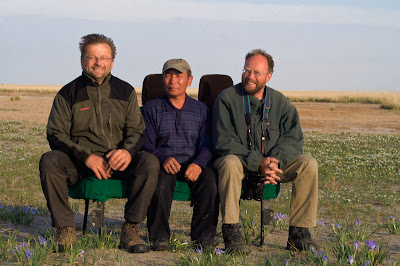 “Bye bye guys”! Manfred, Lkhagvaa and Alfons (left to right)
preparing for their ride back to UB, May 2011. © A. Buchheim

The others went back to Ikh Tashgai Nuur to give the parrotbills another try. More about this coming soon.

the prepared fish at the photo could not to be 'Amur carp Hemibarbus labeo' as the name "Amur carp" is commonly given to Cyprinus carpio haematopterus while the English name for Hemibarbus labeo is "barbel steed". Really, there is Cyprinus at the photo; that is seen by back pin and scale.

The tour was wonderful, too!