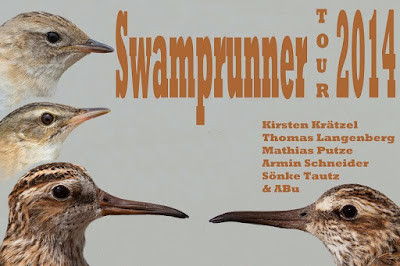 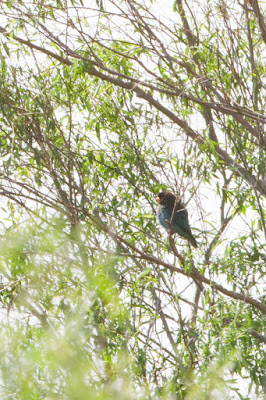 Next morning, on 3 June, we had again a horrible experience in the bushes. All the group members were totally annoyed due to the incredible density and agression of the local mossies. Therefore not everybody had an enthusiastic start into the day. However, Abu walked fearless away and after a while he reported via radio a second for Mongolia: Dollarbird aka Broad-billed Roller!

At first he thought that he had found a single Dollarbird, but in fact we observed two individuals hawking insects above the dense riparian vegetation, very often returning to a favorite perch. We observed them for about 30 minutes, but always from a large distance. Any attempt to get closer to the birds was halted by the impenetrable vegetation.

The most likely subspecies (based on range) involved is the migratory E. o. calonyx. At least the better photographed individual of he two can be aged as adult by its red bill. That two birds together had been seen catching their prey at the same spot does not have to mean that they did or intended to breed there, but it is not impossible that they did or tried, given the fact that there are larger trees—they breed in old woodpecker holes—available.

The only other Mongolian record of the species concerns an observation of a flyby (photographed by Shane McPherson) in open steppe of Khentii province near Darkhan on 17 June 2006 (Gombobaatar et al. 2007). 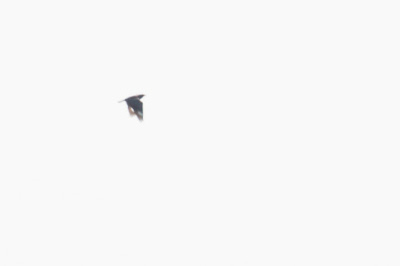 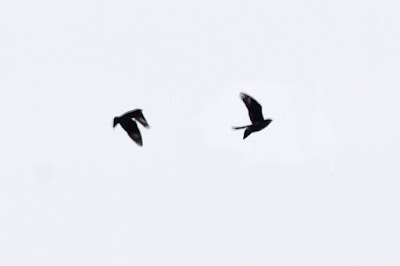 
Wow, what a fantastic spot! Despite the amazing birds around the camp we decided later to abandon the camp to switch to a more dry area where we hoped to meet with less smaller flying objects there. So we went back to Sumber for a quick pit stop and found some further good birds, but this will be on show next… keep on checking Birding Mongolia!

Gombobaatar, S., Munkhzaya, B., Gantulga, B., Odkhuu, B., McPherson, S. 2007. A new finding for Mongolian bird species and unusual bird migration in the steppe. Scientific Proceedings of the Biological Institute of the Mongolian Academy of Sciences 26:104-107.