Today I was walking together with local birder S. Gantugs (biology teacher at Khovd University) when he discovered a female Eurasian Blackbird in a little fenced green area (about 20 trees and a small hedge) in front of the main university building. He immediately identified the bird (without binoculars). After a brief look I jumped into a passing taxi and drove home, getting my camera. It took a little while since the car ran out of petrol on the way back to the bird. However, the thrush was still there when I arrived, and I (marveled at by many students during their lunch break) was able to take a series of photos. After a while we had to abort observation due to a sand/dust storm hitting town, with strong winds continuing well into the afternoon and evening. 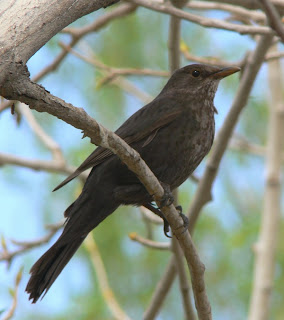 The thrush appeared rather large and heavy (compared to the Blackbirds I know from Germany), with a thick neck, long bill, long wings and long tail. It belonged most likely to the subspecies T. m. intermedius, which breeds in Kazakhstan in the Karatau, the Tien Shan, east to the Dzhungarskiy (Dzungarian) Alatau and the Altai (Wassink & Oreel 2007). Its breeding range most likely reaches the Russian part of the Altai (Koblik et al. 2006). Outside Kazakhstan it occurs as a breeding bird in Tajikistan, Afghanistan, and in western China in Xinjiang, Tibet, and Qinghai (Clement & Hathway 2000). Intermedius is said to be mostly sedentary (Clement & Hathway 2000, Wassink & Oreel 2007), but it has been recorded outside its breeding areas in NW Pakistan and E Afghanistan (Clement & Hathway 2000). 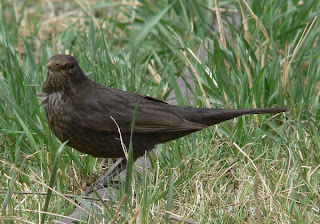 Other species present in the little green patch were several House Sparrows, a pair of Northern Wheatears, a female Common Redstart, a Hume’s Leaf Warbler and a Carrion Crow. 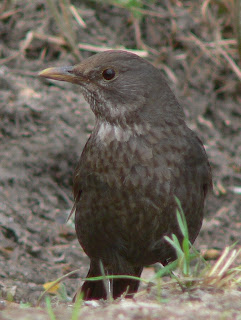 According to my knowledge there has been only one published record of Eurasian Blackbird Turdus merula for Mongolia: Feather remains were found 10 km west of Ulaanbaatar on “00.00.1990” (sic!), cited from Dawaa et al. (1994). The collected feathers have been lost, and with them the correct date (W.-D. Busching in lit. 2004). Without any supporting evidence this record can only be regarded as unproven and cannot be accepted. Thus the observation of the Khovd bird from today becomes the first document record of Eurasian Blackbird for Mongolia. 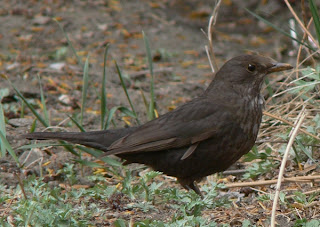 Taxonomic note
The subspecies T. m. maximus, mandarinus, intermedius, and sowerbyi are probably best regarded as an incipient species, Eastern Blackbird Turdus mandarinus (Clement & Hathway 2000). However, intermedius is often still treated as subspecies of T. merula, for example in the Handbook of the Birds of the World and in Rasmussen & Anderton (2005).

Hi Axel - congratulations. I bet Nial hopes the next Korean first poses so well and is so straightforward to ID!!!

Nice one Axel, first for Mongolia. Can't be a bad day. I am going to try to stop at Boon Tsagaan Nuur next week on the way to Bayankhongor. I will let you know what I see.
Cheers Dan