Bohemian Waxwing probably nests in northern Mongolia, but it is much better known as a fairly common to very common winter visitor to many parts of the country, originating from breeders of the vast Russian taiga.

Japanese Waxwing on the other hand hasn’t been reliably recorded in Mongolia, there is just doubtful record from the eastern part of the country.

Igor Fefelov from Irkutsk commented recently on a post in Birding Mongolia that there is a powerful invasion of Japanese Waxwing this autumn/winter, with individuals occurring far west of their usual range, which lies in the Russian Far East and adjacent NE China (Japanese Waxwing doesn't breed in Japan, it's just a passage migrant and winter visitor in Nippon!). They are likely occurring together with Bohemian Waxwings, and there were even some records of Japanese Waxwing from the area around Lake Baikal.

Also, a Japanese Waxwing was trapped much further west, from a flock of Bohemian Waxwings in the Tien Shan Mountains near Almaty, in southern Kazakhstan on 3 January 2013. 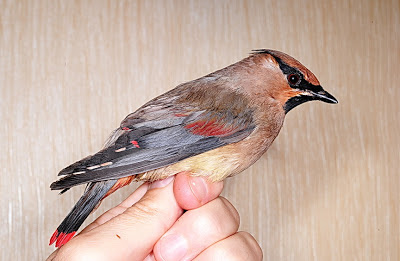 According to Arend Wassink, age based on wing pattern and lack of prominent crest, sex based on broad tailbar and sharply defined throat patch.

Given these observations it seems not unlikely that a Japanese Waxwing could turn up in Mongolia, too! WATCH OUT: This is your chance for documenting the first Japanese Waxwing for Mongolia! Check each waxwing flock carefully: Japanese Waxwing can easily be picked out by its red terminal tailband (yellow in Bohemian!)! Compare the photos below. 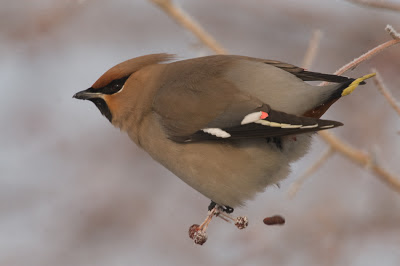 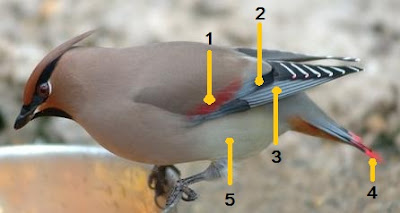 If you find a Japanese Waxwing take as many photos as possible! Waxwings are often very tame, and can be approached very closely. So even a photo taken by a smartphone camera will do! Good luck!

Seems like that we have chance to see them in Ub too, nice information, thanks